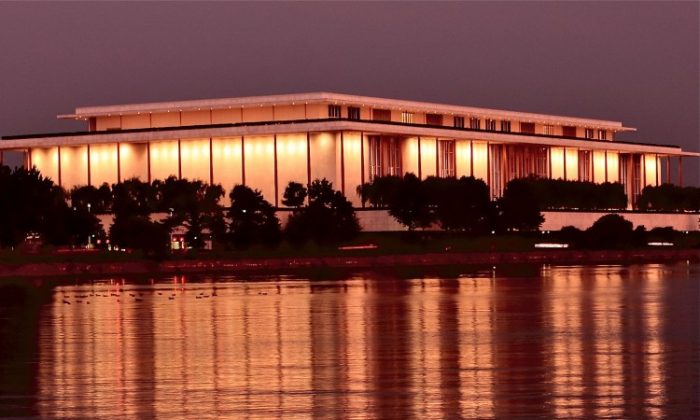 In the audience were Frank Catu and colleague, Lenore Matkas, both in Washington on issues related to their work in health.

“It was beautiful, very artistic and elegant, and really breathtaking,” said Ms. Matkas.

Mr. Catu is the director of the Division of Border Health in Dallas. He thought Shen Yun was “wonderful” and was particularly impressed with the athleticism of the Shen Yun dancers.

“I was absolutely amazed at their ability … and their dancing,” he said. “The part where they had their sleeves, it was so beautiful, it really was. I really enjoyed it.”

Mr. Catu was referring to Sleeves of Silk, a dance based on a particular form of Chinese classical dance known as “water sleeves.” Acting as an extension of the dancers arms, the sleeves can heighten expression as they linger in the air long after the arms have moved.

According to the company’s website, Shen Yun Performing Arts has as its mission the revival and restoration of traditional Chinese culture.

“A performance by Shen Yun is a presentation of traditional Chinese culture as it once was: a study in grace, wisdom, and the virtues distilled from the five millennia of Chinese civilization,” the website says.

Ms. Matkas was impressed with Shen Yun’s performance of Chinese culture and said she felt privileged to be able to see it in the U.S.

“I think it is beautiful that it can be seen in this country,” she said. “It is sort of ironic that it can’t be seen in China so it is really such a special treat to be able to see it here.”

Chinese culture was all but wiped out during the more than 60 years of communist rule and Shen Yun is presently unable to tour the mainland under the present regime.

Mr. Catu compared China’s 5,000-year history to the United States’ 200 years, saying the U.S. was “just like a microcosm” of China.

“So they’re preserving their culture,” he said of Shen Yun, “I am glad to see that.”

Ms. Matkas said she would tell her friends to see Shen Yun, describing the performance as “beautiful, artistic and just breathtaking from the word go.”

Mr. Catu said he would invite all his relatives, and by the sound of it that would require some logistics.

He was happy to hear that he could visit the Shen Yun website and find dates when one of the three Shen Yun companies would be visiting his relative’s city.