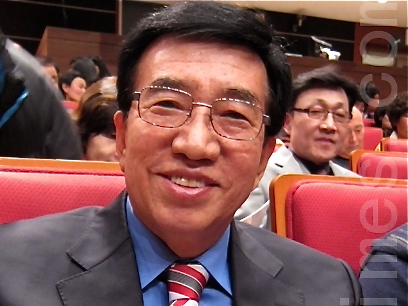 DAEGU, South Korea—The fourth show of Shen Yun Performing Arts New York Company in Daegu started at 2 p.m. on Feb. 26. The internationally renowned performing arts company attracted many celebrities from the art circle to the Daegu Suseong Artipia. Mr. Gin Dae-nan, director of an art museum in Daegu, was glad to see the “climax of art performance” that day.

Mr. Gin was excited after watching the show. “I want to come to see Shen Yun each time it tours Korea. Shen Yun indeed gives the world-class supreme performance. From what I can see in the 5,000 years of Chinese art, Shen Yun’s performance has reached the climax of art,” said Mr. Gin.

He was proud that Shen Yun performed in Daegu. “Shen Yun always performs in Suseong Artipia when it comes to Daegu. With its reputation, Shen Yun’s visit makes people in the art circle in Daegu very proud.”

In Mr. Gin’s eyes, the dances matched perfectly with the dynamic projection in the backdrop and the music. “The elegance of the artists, the graceful dances, the majestic backdrop projection, and the soul-touching music, blended together flawlessly. It makes me feel that I have seen the true art.”

“The program How the Monkey King Came to Be leaves me with a deep impression. The Tibetan dance Khata for the Gods was absolutely dazzling. I could feel that every essential element in the performance was perfectly presented on the stage and the combination of the elements was unforgettable.”

In conclusion, Mr. Gin said: “In my eyes, as far as stage art is concerned, Shen Yun’s skills and surpassing beauty have reached the climax of world-class art.”

‘I feel like recommending Shen Yun to people around me’

After seeing Shen Yun Performing Arts New York Company’s fourth performance, in Daegu, Mr. Lee Sung-ho (translation name), Member of the Assembly of Haman-gun, said: “I was very much impressed with the traditional Chinese costumes and the agility of the dancers. I feel like recommending Shen Yun to people around me, and sharing my experience with more people. I appreciated the magnificent performance.”

Mr. Lee explained, “I was deeply moved by the principles implied in the programs performed by Shen Yun. The graceful classical Chinese dances, gorgeous costumes and the magnificence of the performance left an indelible impression on my mind.”

Mr. Lee mentioned that Shen Yun was recommended to him by a friend and so this time he thought that he had to attend.

He noted that the dances that portrayed the suppression of freedom of belief in China, particularly that of the persecution of the traditional, spiritual discipline of Falun Gong, were enlightening for him.

“From the perspective of a government employee, [I think] regardless of how powerful the suppression force is, eventually evil can by no means overpower good. Watching Shen Yun helped me once again enlighten to the principle that evil can never overpower good. From this show, I also strongly sensed the message that good will prevail.”