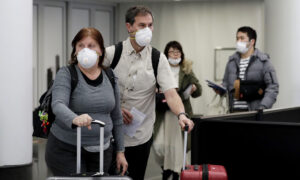 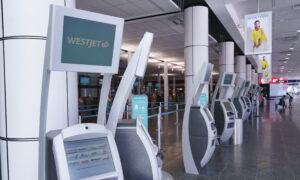 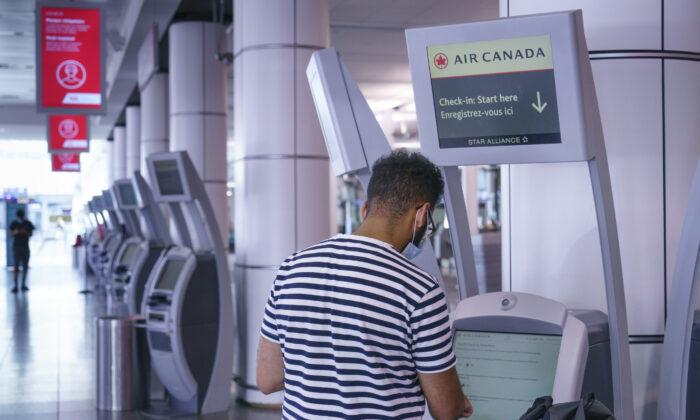 A passenger uses an Air Canada self service check-in kiosk at Montreal-Trudeau International Airport in Montreal on July 31, 2020. (The Canadian Press/Paul Chiasson)
Canada

Direct Flights From Canada to Beijing Resume, but Testing Mandatory

Direct flights from Canada to Beijing resumed on Sept. 3 after flights had been diverted to other ports of entry since March due to restrictions put in place as a result of the CCP (Chinese Communist Party) virus.

Eight countries will now be allowed to resume direct flights to Beijing including Canada, Denmark, Sweden, Greece, Thailand, and Cambodia.

Starting on Sept. 9, however, passengers boarding flights bound for China from Canada will be required to have taken a nucleic acid test within three days of boarding, confirming they are negative for the virus.

The test can be done at a location designated or recognized by the Chinese Embassy in Ottawa or by consulates in various cities.

Passengers must then apply for a green health code from the Chinese Embassy or consulate, showing proof that they tested negative. This proof will be checked again by the airline before passengers board the flight. When travellers arrive in China they will again be tested for the CCP virus.

Those arriving in Canada by air, land, or sea will be assessed again at the port of entry. Travellers will be asked about the purpose of their visit, and if they have a cough, fever, or difficulty breathing. Border services officers may ask additional questions as part of their assessment.

Canada Border Services Agency officers will refer any traveller they suspect is infected for a further medical assessment by the Public Health Agency of Canada.

Upon arrival in Canada it is still mandatory, until further notice, that travellers self-quarantine for 14 days.

The penalties for not following a self-quarantine plan include a fine of up to $750,000, six months in jail, removal from Canada, and being banned from entering for one year.

Travellers entering Canada will also be required to provide contact-tracing information, using the traveller contact information form, which is available through the ArriveCAN mobile app, online, and in paper form.

Foreign nationals who have symptoms of the virus will not be allowed to enter Canada.

Surge in Camping and Cycling

Due to the pandemic and travel restrictions, many people have avoided travelling far afield this summer. Camping, however, has greatly increased in popularity.

Camping equipment sales and campsite reservations soared since May, according to CKPG News.

In British Columbia alone, the Discover Camping reservation system was accessed by 50,000 people on May 25, the day campsite reservations were launched for the season.

This year a record was set with 50,749 reservations in one day.

“Starting in May, I think our biggest increase so far has been fishing,” Rhonda Fredrick, Store Manager at Surplus Herby’s in Prince George, told CKPG News. “There’s been a lot of people coming in, first time fishing, looking for the start-up gear. All rods, motors, everything this year has been going like crazy.”

Starting in May, the outdoor equipment industry also saw a huge increase in the sale of bicycles.

“The demand for bikes under $1,000 is crazy this year. It’s definitely up, especially in the hybrids … and kids’ bikes,” Sean Killen, owner of Bikes on Wheels in Toronto, told CBC.

“Definitely, the spike right now is something we have not experienced before,” said Jabir Hassanali, co-owner of Giant Toronto, a bike shop on Queen Street West near Bathurst Street, according to CBC.

It’s been a similar situation in the United States, with children’s and adult leisure bicycles as well as sports and home fitness equipment seeing double- and triple-digit sales increases, according to retail sales data from the NPD Group.

“Consumers are looking for outdoor- and kid-friendly activities to better tolerate the challenges associated with stay-at-home orders, and cycling fits the bill well,” Dirk Sorenson, sports industry analyst at NPD,” said in a press release on May 7.

“Growth is stemming largely from children’s, BMX, and adult leisure bikes that carry a more approachable price-point than some of the more expensive bike styles that were selling well prior to the COVID-19 crisis. Ultimately, more people are likely riding today than in years past.”