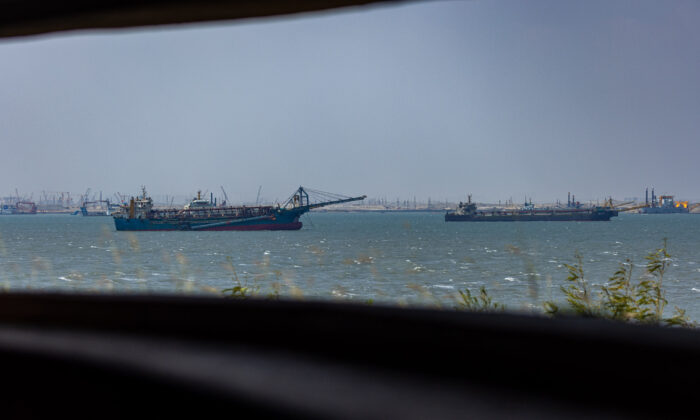 China's sand dredger is seen from an observatory in Kinmen, Taiwan, on Sept. 24, 2022. Kinmen, an island in the Taiwan Strait that is part of Taiwan's territory, is so close to China that the deep-water port of Xiamen, one of China's biggest, lies less than three miles away across the water. (Annabelle Chih/Getty Images)
Thinking About China

Will Beijing test Biden’s willingness to exchange Taiwan for outright war when the US is already stretched thin economically and militarily?

It’s been said that not only does history repeat itself, but it also rhymes. That may be mixing adages, but regarding the United States, China, and Taiwan, both may apply.

Let’s consider the geographic similarities between Cuba and Taiwan.

Cuba sits 90 miles offshore from the United States, a global superpower. It was an ally of the former Soviet Union, a communist regime that competed with the United States for global power and influence from 1945 to its collapse in 1991.

Likewise, from 1949 until today, Taiwan has been a U.S. ally located about 100 miles from the mainland communist China regime. This global superpower is also competing with the United States for control and influence over the world.

In 1962, Havana’s alliance with Moscow was a critical asset for the Soviets in several ways. Cuba was an ideological thorn in the side of the United States, as it showed the world, and especially the region, that American power had its limits, even in its own front yard.

Cuba’s communist revolution also showed the world that Russia’s power extended all the way to the Americas. As a result, Russia’s influence and military support spawned movements and governments sympathetic to the Soviet Union across Latin America. Most notable were Chile, Peru, Argentina, Nicaragua, Brazil, and of course, the one-time jewel of the region, Venezuela.

Much the same can be said about Taiwan, with a few critical differences, of course. For example, just as Cuba was an inspiration and perhaps even a catalyst for communist revolutions in the region, a secure, free, and independent Taiwan is a key factor for U.S.-led security, independence, and freedom of the entire Asia-Pacific region.

A Thorn in Xi’s Side

Furthermore, Taiwan is an ideological thorn on the side of the Chinese Communist Party (CCP). The small, free, and capitalist island nation of about 23 million shows the 1.4 billion Chinese living under the bootheel of the CCP that they don’t need the Party to rule over them in order for China to succeed. The tiny but wealthy island nation is undeniable proof of that fact.

That is why Xi Jinping, in his ascent to absolute power, has pledged to bring Taiwan under Beijing’s control by 2027, if not before. As his power over the economy grows, the more it will contract in real terms.

But in the Cuba-Taiwan comparison, the key distinction is Taiwan’s unique strategic technological and economic value to the world. Unlike Cuba, which produced nothing the world really needed, barring excellent cigars, a bit of sugar and rum, as well as Latin jazz and mercenaries for export, Taiwan produces microchips that are critical for virtually all of the developed economies.

The strategic importance of Taiwan Semiconductor Manufacturing Company (TSMC) and a handful of other manufacturers cannot be overstated. It’s estimated that the chipmaker provides up to 92 percent of the world’s most important chips for satellite communications, guidance, artificial intelligence, robotics, and many other high-tech verticals. No advanced economy in the world can function without them.

The Lynchpin in US Hegemony

Because Taiwan is the lynchpin of American power in the region and, arguably, in the world, it would fundamentally alter the world order if it were to fall under Beijing’s control. U.S. military and economic credibility would be shattered.

The Losing Blockade Calculus in Cuba

There’s at least one other parallel in the Cuba-Taiwan matrix that may come to pass. The resolution of the Cuban Missile Crisis in the fall of 1962 wasn’t accomplished with military force per se but rather by the U.S. naval blockade of the island.

The blockade forced the Russians to either escalate the situation by engaging the U.S. Navy 90 miles off the coast of the United States or stand down. If Moscow sought to break through the blockade, it would be viewed as starting World War III or at least facing the possibility of a nuclear attack.

It was a lose-lose situation for Moscow. If the Russians attacked the U.S. Navy, they’d be seen as the aggressors in a naval battle against the United States. That would be bad enough. But they would also most certainly lose that battle and suffer both a military and ideological defeat. Worse, engaging the U.S. militarily could also trigger nuclear escalation.

Would the Soviet Union trade Moscow for Havana? Of course not.

Would the US Violate a Chinese Blockade of Taiwan?

China needs access to TSMC’s microchips badly, and needs the production facilities intact. An invasion may lead to Taiwan destroying its factories.

But what if China decided to deploy a naval blockade around Taiwan? What if Beijing declared that any violation of the blockade, or associated airspace, would be considered an act of war?

More to the point, would the Biden administration be prepared to break such a blockade were one to manifest?

Much of the same arguments above may also apply to this scenario. The onus of initiating actual warfare would be on the United States, and the risk of escalation would certainly be there. Such an escalation would likely involve Taiwan, Japan, and perhaps South Korea. It could also trigger a North Korean attack on both South Korea and Japan.

Several additional negating factors would have to be considered as well. U.S. economic weakness, a depleted navy, and the decline in overall military readiness in U.S. forces would play a role in such a decision. Increasing and extended U.S. involvement in Ukraine’s war against Russia would also be a significant factor.

The potentially huge and unknown direction of events should the United States break a Chinese blockade around Taiwan may cause hesitation on the part of the Biden administration, which has shown a preference for avoiding or ending. Another critical factor is China’s arsenal of hypersonic anti-ship missiles, against which U.S. ships may have little or no defenses.

A US Withdrawal in Asia?

What might be the position of the United States in such a scenario?

Despite the president’s hawkish rhetoric about defending Taiwan, in the event of a blockade by China, rather than an invasion, it’s conceivable that the United States would come to a negotiated settlement in order to save face. The administration would characterize itself as a peacemaker, believed only by diehard supporters at home, but no one else, particularly in the region.

Shortly after that, Beijing would likely break the agreed-upon terms to finish the job on Taiwan, humiliate the Biden administration (again), and potentially end U.S. pretensions of hegemony in the region, if not the world.