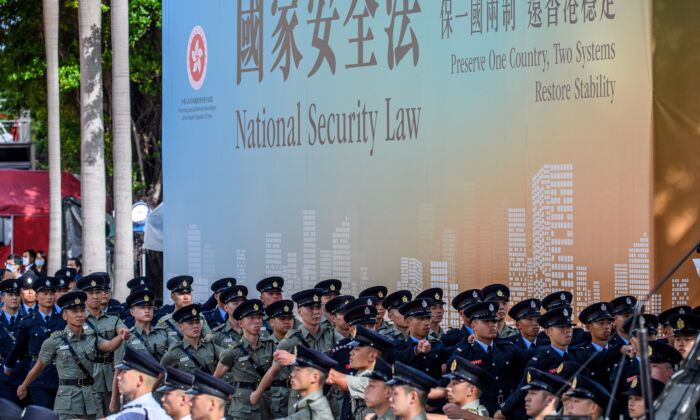 Attendees from various forces march next to a banner supporting the new national security law at the end of a flag-raising ceremony to mark the 23rd anniversary of Hong Kong's handover from Britain in Hong Kong on July 1, 2020. (Anthony Wallace/AFP via Getty Images)
HK Current Affairs

The report, submitted on May 30, was prepared by the Hong Kong Human Rights Information Centre (HKHRIC) and the Hong Kong Rule of Law Monitor (HKRLM) as a non-governmental organization (NGO) submission ahead of the Committee’s 135th session.

Following an NGO submission, the Human Rights Committee, a body of the U.N. that monitors the implementation of the International Covenant on Civil and Political Rights (ICCPR) among its state parties, will then meet with the NGOs to discuss issues from the report before drafting a concluding observation of whether the state parties have fulfilled their obligations under the ICCPR.

The 78-page submission described how the national security law (NSL), implemented by the Chinese Communist Party (CCP) in Hong Kong on June 30, 2020, has deteriorated Hong Kong’s human rights situation based on hundreds of verifiable issues that occurred within the last two years of implementation.

The report states that the ambiguous, and overly broad definition of the NSL has allowed arbitrary interpretations by the Hong Kong government, and as a result, has substantially deteriorated freedoms in categories such as speech, religion, press, academia, associations, and assembly guaranteed under the ICCPR.

Other issues, such as excessive violence by law enforcement, eroded electoral rights, and the removal of jury trials for political dissidents, were also included in the report to demonstrate the degree to which the NSL has undermined freedoms in Hong Kong. The report also suggested 66 recommendations for the NSL.

The two organizations noted that by filing this submission, the writers and contributors bear the risk of reprisal from the CCP since the authorities are actively trying to dismantle civil society groups in Hong Kong.

At least 49 civil society organizations were dismantled since the NSL’s imprementation, between January and September of 2020, according to Radio Taiwan International.