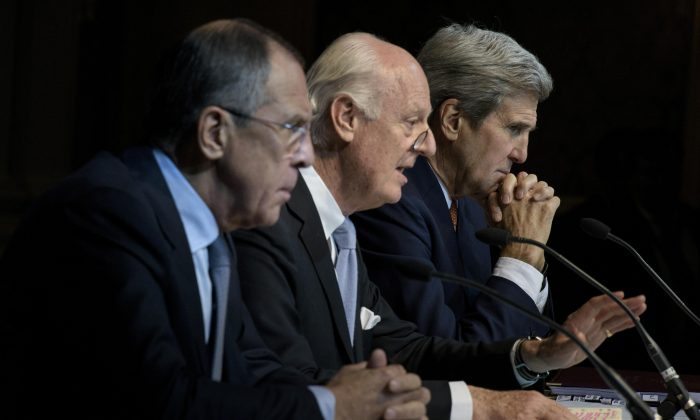 VIENNA—Invoking the need for joint action after the attacks in Paris, foreign ministers of nearly 20 nations agreed Saturday to an ambitious yet incomplete plan for bringing peace to Syria and ending its role as a breeding ground for ISIS and other radical Islamic groups.

Countries such as Iran and Saudi Arabia, which support different sides in the conflict, put aside their dispute to condemn the bombings and shootings that left at least 123 people in the French capital dead Friday. So did Moscow and Washington.

Standing next to Russian Foreign Minister Sergey Lavrov ahead of Saturday’s full ministerial meeting, U.S. Secretary of State John Kerry called the attacks “the most vile, horrendous, outrageous, unacceptable acts on the planet”. He said they “encouraged us today to do even harder work to make progress and to help resolve the crises that we face.”

“The events in Paris underscore the threat that Daesh poses to all of us,” he later told reporters, referring by an alternate name to ISIS, which claimed responsibility for the Paris attacks. Kerry spoke in French for part of his post-meeting remarks, in a bow to the victims of those attacks.

The plan presented by the two appeared to draw heavily on a recently circulated Russian initiative. With just two weeks elapsed since the Syria talks first convened, it could mark a significant advance, if successful.

It sets a Jan. 1 deadline for the start of negotiations between President Bashar Assad’s government and opposition groups. Lavrov said the Syrian government already had put forward its representatives, with the U.N. special envoy for Syria, Staffan de Mistura, to begin immediate work on determining who should sit at the table as part of the opposition team.

Within six months, the negotiations between the Syrian sides are to establish “credible, inclusive and non-sectarian” transitional government that would set a schedule for drafting a new constitution and holding a free and fair U.N.-supervised election within 18 months, according to a joint statement released by the United Nations on behalf of the 19 parties to the talks.

While the diplomats agreed on a U.N.-administered cease fire enforcement mechanism they failed to reach consensus on which groups other than the Islamic State and al-Qaida affiliates would not be eligible for the truce. Under the terms, the sponsoring countries of each group covered by the cease fire would be responsible for making sure that group upholds it.

Lavrov said Jordan would oversee a process that would identify which groups should be considered for identification as terrorists, so they wouldn’t be eligible. That is to be completed by the time the political process between the government and opposition begins in January.

Comments from the two also reflected continued differences on the causes of the extremist threat emanating from Syria. Kerry suggested radicals were drawn to the country in their fight against Assad, a view Lavrov disputed. U.S.-Russian disputes on what, if any role, Assad should play in any transition remained, although both men played them down as they focused on the progress made.

Washington wants Assad removed, but Kerry suggested Syrians themselves would decide the fate of the Syrian president through the democratic process.

“We did not come here to impose our collective will on the Syrian people, exactly the opposite,” he told reporters at the end of the talks. “The Syrian people will be and must be the validators of our efforts.”

While “we still differ on the issue of what happens with Bashar al Assad … we do agree to this: It is time for the bleeding in Syria to stop, it is time to deprive the terrorists of any single kilometer in which to hide.””

At the same time, Kerry said the war “can’t end as long as Bashar Assad is there. That’s the perception of the people waging the war.”

But Lavrov said the conflict—or its solution—is “not about Assad.”

“It doesn’t matter if you are for Assad or against him,” he said. “ISIS is your enemy.”

Now in its 5th year, the war has killed more than 250,000 people. It has left 11 million uprooted from their homes, while allowing Islamic State militants to carve out significant parts of Syria and Iraq for their would-be caliphate. Europe and Syria’s neighbors, meanwhile, are struggling to cope with the worst migrant crisis since World War II.

As the meeting wrapped up, U.N. Secretary-General Ban Ki-moon urged ministers “to move beyond their differences on Syria.” French Foreign Minister Laurent Fabius said the attacks in Paris made it all the more necessary for the international community to find a common approach in Syria and terrorism, sentiments echoed by the foreign ministers of Germany, Jordan and Saudi Arabia.

Jordan’s foreign minister, Nasser Judeh, said the Paris attack “reaffirms our collective commitment” to fight terror and extremism wherever it may occur, while EU foreign policy chief Federica Mogherini said no one could turn away from the common threat.

“We are together in this: Europeans, Arabs, East and West, all the international community,” she declared. “The best response to this is actually coming together, overcoming our differences, and trying together to lead the way towards peace in Syria.”

In a decision apparently prompted by the Paris attacks, the participants also chose the French capital for their next meeting before year’s end to go over progress made toward the cease fire and the selection of delegations for the political talks.