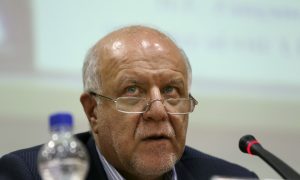 VIENNA—An Iran nuclear agreement appeared likely within hours, diplomats said late Monday after a day in which American and Iranian negotiators appeared to be struggling to clear final obstacles and looking like they’d miss their fourth deadline in less than two weeks.

Three diplomats familiar with the talks said the announcement could come early Tuesday, possibly during pre-dawn hours in Vienna. One said some of the top officials involved in the negotiation needed to leave Austria’s capital in the morning, thus hastening the declaration.

The diplomats weren’t authorized to speak publicly on the status of the negotiations and demanded anonymity. Their reports of a breakthrough capped a seesaw day of developments that started with high hopes for an accord. The mood soured as vexing questions including the future of a U.N. arms embargo on Iran proved troublesome.

Diplomats said the nuts and bolts of the written nuclear accord had been settled days ago.
Related Coverage

As a midnight target for a deal approached in Vienna, diplomats said the nuts and bolts of the written nuclear accord had been settled days ago. And Iranian President Hassan Rouhani briefly raised expectations of an imminent breakthrough by proclaiming on Twitter: “Iran Deal is the victory of diplomacy & mutual respect over the outdated paradigm of exclusion & coercion. And this is a good beginning.”

Minutes later, Rouhani’s tweet was deleted. He then retransmitted it, adding the word “If” in front of “Iran Deal” to reflect that negotiators weren’t there yet. The proposed pact would impose long-term and verifiable limits on Iran’s nuclear program and provide the Islamic Republic tens of billions of dollars in relief from international sanctions.

At the White House, press secretary Josh Earnest said the talks were “making genuine progress,” and the American negotiating team under Secretary of State John Kerry would remain in Vienna as long as the negotiations advanced. If a deal wasn’t reached Monday, he said, the 20-month-old provisional constraints on Iran’s enrichment of possible bomb-making material and other nuclear activity would remain in force as the diplomacy continued. The current round of talks is already in its 17th day.

Already Sunday, diplomats spoke of clinching the complete agreement within hours, only to then say the final signoff would have to come the following day. As Monday evening arrived, they offered a similar refrain.

Related Coverage
With a History of Distrust, Can the US and Iran Work Together to Take Down ISIS?

A U.S. statement issued at the time said the final agreement would result in “the comprehensive lifting of all U.N. Security Council sanctions” on Iran, which could be interpreted to include the arms embargo. But the U.S. also said at the time that “important restrictions on conventional arms and ballistic missiles” would be incorporated in any new U.N. guidelines for Iran.

Washington wants to maintain the ban on importing and exporting weapons, concerned that an Iran flush with cash from the nuclear deal would expand its military assistance for Syrian President Bashar Assad’s government, Yemen’s Houthi rebels, the Lebanese militant group Hezbollah, and other forces opposing America’s Middle East allies such as Saudi Arabia and Israel.

Iranian leaders say the embargo must end as their forces are combating regional scourges such as the Islamic State in Iraq and Syria. And they’re getting support from both Russia and China, who want at least a partial lifting of the restrictions. Moscow, in particular, hopes to expand military cooperation and arms sales to Tehran, including the long-delayed transfer of S-300 advanced air defense systems—a move long opposed by the United States.

Diplomats reported at least two other issues beside the arms embargo proving difficult: How to finalize a long-stymied U.N. investigation of alleged nuclear weapons work by Tehran and Iran’s demand that any U.N. Security Council resolution approving the broader deal no longer describe Iran’s nuclear activities as illegal.

On the International Atomic Energy Agency’s probe, the Iranians insist they have never worked on weapons and top Iranian officials say military sites and nuclear scientists are off-limits to investigators. On the legality of its program, Iran hopes to receive positive recognition of its diplomatic effort with the six world powers on the other side of the negotiating table—with a quick lifting of U.N. sanctions without the stain of being adjudged in violation of the Nuclear Nonproliferation Treaty.

“There should not be an extension in the talks,” Zarif said in remarks carried by Iran’s official IRNA news agency. Later, from the balcony of the ornate manor-turned-hotel hosting the talks, he told reporters that negotiators are “sleepy and overworked.”