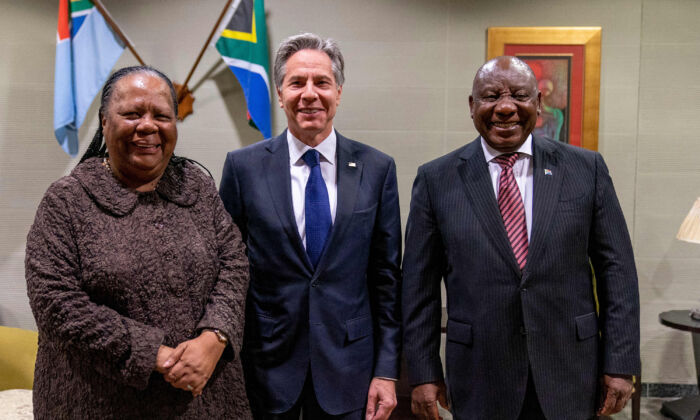 A sharp uptick in U.S. diplomacy toward Africa in recent months reveals a paradigm shift from the previous administration. In just 10 months, U.S. Secretary of State Antony Blinken has visited the continent three times to deepen ties with African governments and other stakeholders on the continent.

After visits to Kenya, Nigeria, and Senegal last November and Morocco and Algeria in March, Blinken traveled to South Africa, the Democratic Republic of the Congo, and Rwanda in August.

The hallmark of the latest visit was the announcement of a U.S. strategy toward sub-Saharan Africa, which has been in the making for nearly nine months.

The Biden strategy notes that allies and partners in Europe, the Middle East, and the Indo-Pacific are committed to working with the United States to address political and security crises. China, by contrast, sees the region as an “important arena to challenge the rules-based international order,” advance its own narrow commercial and geopolitical interests, undermine transparency and openness, and weaken U.S. relations with African people and governments, the strategy reads.

Russia views the region as a permissive environment for parastatals and private military companies, often fomenting instability for strategic and financial benefits, according to the Biden strategy.

“Russia uses its security and economic ties, as well as disinformation, to undercut Africans’ principled opposition to Russia’s further invasion of Ukraine and related human rights abuses,” the strategy reads. “The United States is both responding to growing foreign activity and influence in sub-Saharan Africa, as well as engaging in a region undergoing significant transformations to its socioeconomic, political, and security landscape.”

Presenting the Biden administration’s sub-Saharan Africa Strategy in Pretoria, South Africa, on Aug. 8, Blinken acknowledged that sub-Saharan Africa is a “major geopolitical force, one that shaped our past, is shaping our present, and will shape our future.”

Blinken’s Aug. 7–Aug. 11 tour of three sub-Saharan African states came hard on the heels of his Russian counterpart, Sergei Lavrov, who also has been crisscrossing the continent, and of French president Emmanuel Macron, who visited Cameroon, Benin, and Guinea-Bissau with the aim of renewing France’s relations with the African continent.

Experts believe that the new Biden approach is considerably more balanced and recognizes that Africans live increasingly globalized lives, contrary to the Trump administration’s approach to the region, which largely saw the continent as a “great power” battleground between Russia, China, and the United States.

Freedom Onuoha, a senior lecturer at the Department of Political Science at the University of Nigeria–Nsukka, sees the new U.S. strategy as an indication of Washington’s realization that much of the influence it wields in Africa is being degraded by the rising influences of China and Russia.

“Indeed, the United States and the West, in general, have lost some ground in Africa, but it is even more telling that the fear of great power competition in the context of Africa’s geopolitical space will be a contention between three powers—the United States, China and Russia—as against two [the United States and China] as many are wont to accept,” he told The Epoch Times.

He likened the renewed U.S. effort to deepen ties with Africa to “the pressing of a panic diplomatic button” in response to the challenges posed by an “increasingly penetrative and assertive China and that of a provocative and aggressive Russia in the continent.”

David Otto, director of counterterrorism for the Geneva Centre of African Security and Strategic Studies, concurs, predicting that any international partner with a fair trade or defense deal stands to benefit in any geopolitical competition in Africa.

“African states are not strangers to geopolitical battles and propaganda and targeted messages of exploitation by either the West or the East, especially when it concerns the United States, France, Russia, and China,” Otto told the Epoch Times. “Africa needs equity in trade, defense, and economic deals but not partners with clean hands.”

“It’s a fight-back technique—the United States and the West are concerned that previous geopolitical friendly ground is shifting to new suitors, and like a jealous partner, panic has kicked in, and promises never made before are now on the table—but it is late coming.”

One of these was the July 24–Aug. 1 visit by the special envoy for the Horn of Africa, Mike Hammer, to Egypt and Ethiopia.

While in Ethiopia, Hammer reviewed the progress made in terms of humanitarian aid delivery, accountability for human rights violations and abuses, and efforts to advance peace talks between the Ethiopian government and authorities in Tigray.

In Cairo, Hammer met with senior Egyptian officials to advance a diplomatic resolution for the disputed Grand Ethiopian Renaissance Dam (GERD) that supports the water needs, economy, and livelihood of the people of Egypt, Sudan, and Ethiopia.

Another move by the United States to strengthen its relationship with countries across Africa is when the Biden administration will convene the second U.S.–Africa Business Summit in Washington on Dec. 13–Dec. 15.

Announcing the summit on July 20, U.S. Vice President Kamala Harris said that it will “demonstrate America’s enduring commitment” to its African partners—based on principles of mutual respect and shared interests and values.

“A critical part of this summit will be to bolster our economic relationship. … There is so much opportunity for economic growth—in Africa and, of course, the United States—when we all collaborate and coordinate. By working together, we can unleash growth and opportunity that far exceeds what either the public or private sector can achieve on its own.”