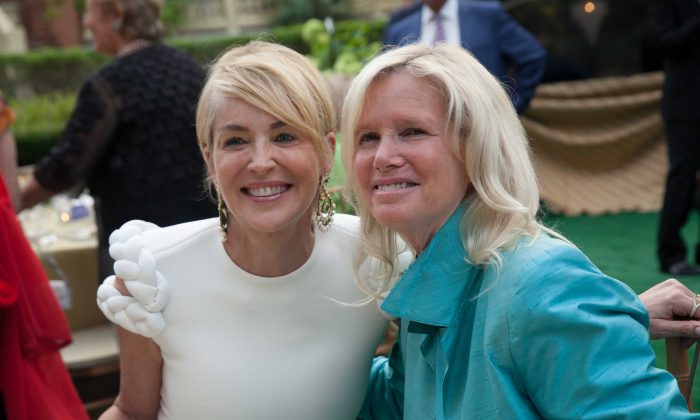 The thousand dollar a plate affair boasted all the tony trappings. Private mansion, beefed-up security, major Hollywood star-power, a flotilla of ambassadors and a humanitarian cause (global peace) that impacts everyone, everywhere.

The evening’s event on Saturday, July 25, supported Sharon Stone’s upcoming film, “The Principle,” which was designed to help heal the problem of online bullying that hurts millions of children, teenagers and adults worldwide.

At the posh estate in Potomac, Maryland, of philanthropist Shahin Mafi, who spearheads the Azar Foundation for Children of the World, the 57 year old movie icon and man-magnet, Sharon Stone, spoke of “Unity Consciousness” and “Respect for the Planet.” The single mother of 3 adopted children, Stone sat at a center table chatting most of the time with table partner Dr. Susan Blumenthal, former U.S. Assistant Surgeon General. Stone survived a life-threatening brain aneurysm in 2001, and spent two years learning to walk and talk again.

Afterwards, the 100 guests—dining al fresco under a white tent festooned with chandeliers—viewed a screening of the short film “Admissions” about war and the afterlife, created by John Viscount, co-founder of PeaceNow.com, which is gathering one billion signatures to enact a new UN Global Resolution that creates Ministries and Department of Peace in governments worldwide.

The film’s message? “You can’t want hell for other people without being in hell yourself.” The gravel-voiced siren Stone continued the spiritual/political thread from the podium speaking her truth, “We get to choose who we want to be. … Violence begets violence.”

And ultimately, as this was after all a fundraiser, “We need funding…”

The evening concluded with a meditation led by Sister Jenna, and all guests sank into the swells of thought, prompted by the questions, “Who is it that has hurt you? Who is it that you have hurt?” Jenna founded the first Meditation Museum in the U.S. located in Maryland and serves as the spiritual leader for the Brahma Kumaris Organization in D.C.

Somewhere in a slice of time, what appeared to be just moments after the deep hush of a well-heeled crowd, mum from the internal housekeeping, Sharon Stone vanished from the scene, before photo-ops or autographs could be requested—and guests exited the Potomac manse to cue up for their cars under a canopy of stars.

Alessandra Gelmi, 7-time national award winning author of the novel “Who’s Afraid of Red” and the poetry collection, “Ring Of Fire”, was a professor of writing at Boston University and has written for four national daily newspapers and dozens of magazines.