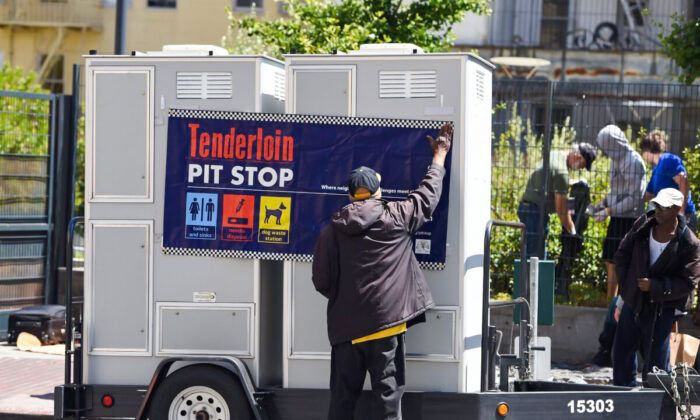 My wife and I recently celebrated our 11th wedding anniversary.

We decided to go to an old-school San Francisco landmark: John’s Grill. We were fortunate enough to get a little more than just dinner. We got the San Francisco version of “Dinner and a Show.”

Established in 1908, John’s Grill is famous for serving Sam Spade in “The Maltese Falcon” novel by Dashiell Hammett. The 1941 movie adaptation starring Humphrey Bogart made the restaurant even more famous.

John’s Grill sits on the edge of the infamous Tenderloin neighborhood. If you’ve never been there, it’s the neighborhood that you see in all the videos online and on TV. Although the Tenderloin sits adjacent to Union Square and the Civic Center, it’s full of open-air drug markets, drug users, homeless encampments, and violent crime.

So, my wife and I parked our car and walked through the Tenderloin to John’s Grill. It was a lovely sunny day, but I can attest that the well-published stories are all true.

As we walked past multiple homeless encampments and excrement smeared across the sidewalks, we talked about the best route to take to the restaurant. Normally I would’ve walked Eddy Street down to Powell, but we decided to go up Taylor toward Ellis Street. Typically, I would say the “show” in the Tenderloin would be mentally ill people or drug addicts yelling at imaginary people or passersby. Or if you’re really lucky, you could watch a naked homeless person, covered in only filth, frolicking around. But that day was different, and the timing was impeccable.

When my wife commented on how awful the neighborhood looked with its boarded-up storefronts and tent shantytowns, it reminded me of an article I had read earlier in the day. So I started telling her about the article, which discussed Mayor London Breed’s comments in her “State of the City” speech. In the speech, she said that “too many people across the city don’t feel safe.”

“You know, there’s a lot of noise about what’s happening in our city. You see it in the headlines, often in the right-wing media. They love to talk about San Francisco, don’t they? You see it on social media. You see one video take off as if it’s telling the whole truth about who we are. I know it’s challenging with all that noise to really understand what’s happening.”

Before I could finish my paraphrase of the above quote, our free Tenderloin matinee began. As we approached the corner of Ellis and Taylor streets, I could hear a loud commotion. I looked across the street and saw someone yelling to themselves, not too unusual. Then my wife said, “I think someone’s fighting.”

From around the corner emerged two men deep in the throes of battle. They were yelling at each other and playing tug of war with a machete. Yes, a machete. Not the greatest plan, to push and pull a foot-and-a-half long machete, but hey, it’s the Tenderloin, where poor life decisions all end up. The men kept pulling on the machete and the sheath began to come off. I couldn’t predict the future, but I imagined the winner of the machete would then bring a violent end to the other party. The result of that clash is something I get to see constantly at work, but not what my wife needs to see.

So, my wife and I took an about-face and decided to take a different route to the restaurant. I called it in and provided the description. The dispatcher sent my coworkers, and they dutifully handled the incident.

As we continued walking to the restaurant, my wife asked, “What were we talking about before that happened?”

In the excitement of the event, I had forgotten what we were talking about earlier.

Then I laughed as I remembered, and I said, “Oh yeah, the mayor said this is all right-wing news and just one video, but we all know the truth.”

The timing of our show was pretty incredible, unbelievable really.

Maybe I’ll start investigating to see if Tucker Carlson set up the machete fight on Ellis and Taylor. Fox News must spend a fortune to create the conditions in the Tenderloin. They must employ a whole army of drug dealers, homeless people, and drug addicts. Fox News must also pay a fortune to decorate the streets with human excrement, tents, and drug paraphernalia. I know they’re a large media company, but even Hollywood couldn’t pull this off.

Sorry Mayor Breed, we do all know the truth. These aren’t exceptions to the rule; these aren’t one-off videos of the Tenderloin. The videos posted online represent daily life for residents of the Tenderloin. Sadly, many of them are hardworking new immigrants and their families, just trying to survive among the squalor. The videos she dismissed represent a complete failure of the progressive policies that continue to reign over San Francisco.

Keep pretending that it’s just Fox News picking on San Francisco. Anyone with eyes can go and punch their free ticket to see all this madness, any day of the week. Until the city wants to get serious about reigning it all in, it will only get worse.

In Michael Shellenberger’s book, “San Fransicko: Why Progressives Ruin Cities,” he quotes someone who said the Tenderloin is like Pleasure Island from Pinocchio. This is the most appropriate analogy for it. In Pinocchio, the disobedient boys go to Pleasure Island and have no rules. The boys get whatever guilty pleasures they desire, such as cigarettes, booze, and gambling. However, they don’t know that the island is cursed and eventually turns them into donkeys. Similarly, the city provides many services under the guise of “compassion,” but in reality, it’s just enabling drug abuse, encampments, and ultimately the deaths of the very people they attempt to help.

City leaders need to start taking ownership of the problems that their policies have created. Blaming news organizations for reporting on it won’t fix anything. At least Pinocchio’s nose would grow when he didn’t tell the truth.

Fortunately, after our show was over, we sat down at John’s Grill and enjoyed a fantastic celebratory meal, under the watchful eyes of the Maltese Falcon. The ambiance was fitting its film noir era heritage, conjuring dreams of an Old San Francisco, which like the film genre itself, seems to have faded into the fog and become only a memory.