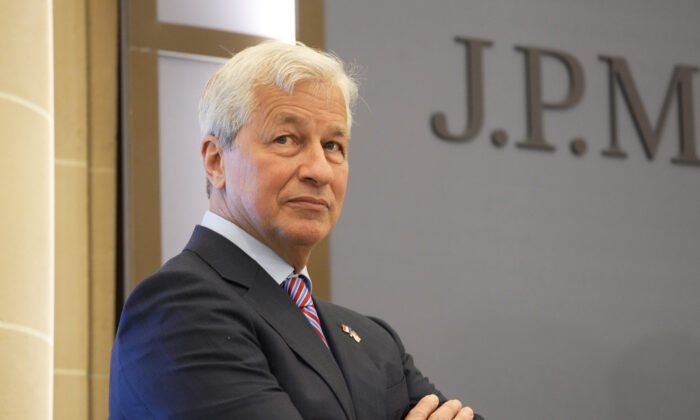 JPMorgan CEO Jamie Dimon during the inauguration the new French headquarters of JPMorgan bank in Paris on June 29, 2021. (Michel Euler/Pool via AP)
Thinking About China

JPMorgan Chase CEO Jamie Dimon said out loud what many business leaders know but are afraid to say.

At a late November industry conference in Boston, Dimon said, “I’ll make a bet that we last longer [than the CCP.]” He continued by joking that “I can’t say that in China. They are probably listening anyway.”

While Dimon later characterized that brief moment of truth as a “joke,” he likely wasn’t joking. And to the Chinese Communist Party (CCP), discussing the longevity of the Party is no joke.

So much so that Dimon was forced to walk back his comments and apologize to the Party the next day. “I regret and should not have made that comment,” he said. In total, Dimon apologized twice. “I regret my recent comment because it’s never right to joke about or denigrate any group of people,” he said later.

Dimon had no choice but to apologize.

While Chinese people—even CCP members—also joke about and denigrate the Party, Dimon made the mistake of doing so publicly. And as CEO of a company with significant presence in China, he probably regretted his “joke” once it was apparent what the ramifications were.

Let’s be honest, Dimon verbalized what many business leaders believe, but can’t say publicly. He probably thought the Boston event was closed to the media and that he was among friends and associates, much like a news anchor who uttered what he or she really thought about a topic without realizing the microphone and camera were still live.

In the media, we often forget that what people tell the press isn’t necessarily the truth, but what they must say for publicity or self-preservation.

A friend of mine, a senior partner at a global consulting firm, knew that every time he went to China, his phone was being hacked, and his hotel room was searched while he was away. Prior to a business trip to China, he would swap out his iPhone for a “dumb” phone and leave anything near and dear to him at home. He knew that the CCP is an illegitimate regime that has been committing crimes against humanity.

But publicly while meeting with Chinese business and political contacts? He was all smiles and handshakes.

This isn’t to defend him or Dimon, but to illustrate an unfortunate reality that many businesses and governments face when dealing with the CCP. They can’t afford to be honest with their thoughts on the CCP.

From the comfort of one’s living room, it may be easy to demand that Dimon stand up to the CCP. From Dimon’s perspective, the global financial empire he built over the past two decades was on the line. His position at the bank, and his family’s wealth, were possibly on the line. To borrow a phrase written by the Chinese tennis player Peng Shuai, Dimon against the CCP would be “like an egg hitting a rock.” Even a business leader with his reputation is weak when confronted with the CCP.

That’s the unfortunate reality. While we hope leaders have the courage to sacrifice their positions and fortunes for their beliefs, it isn’t a reasonable expectation from all. Dimon, after all, is far from a role model. He’s just a man trying to protect his job and his family’s wealth.

But can this reality be changed?

To change this dynamic, Western governments would need to step in and coordinate a global decoupling economically and financially from China. The entire trade and commercial framework needs to change. It was easier 50 years ago to push back against the Soviet Union and communism because our economies were less intertwined, and as a result, vested interests weren’t challenged.

Businesses have vested interests with China, but Western governments don’t—or at least, shouldn’t. To decouple, the government sector should limit influence from the business community. Even if successful, it would take a long time to implement such a decoupling. It would slightly decrease the market capitalization of companies as their addressable market size would shrink, offset by higher investments in their home markets.