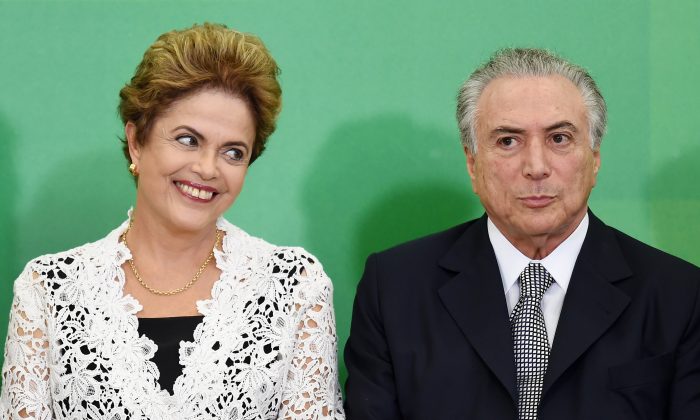 Dilma Rousseff Suspended: So What’s Next for Brazil’s Frayed and Fragmented Democracy?

The Brazilian Senate voted decisively to continue impeachment proceedings against President Dilma Rousseff, who will now be replaced for six months by Vice President Michel Temer while the allegations against her are investigated. While not as theatrical and raucous as the impeachment vote in congress on April 17, the Senate debate spoke volumes about the state of Brazil’s increasingly dysfunctional politics.

Senator José Serra of the PSDB, the main opposition party, called the impeachment process a “quasi-tragedy” for the country and a “bitter though necessary medicine.” Serra is best known as a two-time former presidential candidate, beaten by both Luiz Inácio “Lula” da Silva in 2002 and Rousseff in 2010. While he will undoubtedly be invigorated by a degree of schadenfreude, his “medicine” comment is apt; it raises the question of what illness the impeachment effort is supposed to cure, and whether the remedy is in fact worse than the disease.

Another central player in the Senate debate, Fernando Collor de Melo, was the country’s first directly elected president since 1960, running on an economic reform and anti-corruption agenda. Collor resigned just before he himself faced a Senate impeachment vote in 1992, following corruption accusations and mass demonstrations against his government.

Charged with receiving bribes in the sprawling Operation Car Wash corruption investigations in 2015, Collor’s alleged involvement in corruption dwarfs the direct accusations against Rousseff. Ironic, then, that he can still vote for her downfall.

Collor used his post-vote speech not only to reflect on his own impeachment experience, but to argue that the presidential system itself is the source of many of the country’s political problems. This question of what counts as political legitimacy underpins the whole impeachment saga.

Although Rousseff won the 2014 presidential election on a second round and by only a small margin, her mandate is based on 54 million votes, something she made sure to mention in her speech after the Senate sent her to trial. Similarly, critics of the impeachment process have questioned whether the congress and Senate’s votes can legitimately circumvent the 2014 election results.

In a press release days before the congress voted, the Organization of American States also pointed to the political nature of the impeachment process, arguing that Brazil’s presidential democracy “cannot operate out of the blue as if it were a parliamentary system, moving for impeachment, in this case of the chief executive, because of a shift in the political balance of a coalition government.”

With the legitimacy of the process constantly called into question and so many of the politicians implicated in other corruption scandals, this saga has only added to the system’s instability and political paralysis.

To make things worse, Brazilian politics is now maddeningly fragmented. The national Congress has no fewer than 28 political parties. As of May 2015, the largest party, Rousseff’s party’s former coalition partner the PMDB, has just 12.5 percent of the available seats.

This makes it extremely difficult for a president’s party to form a governing coalition and secure majorities to pass legislation. Keeping every coalition party on board demands considerable political skill, and anti-government coalitions can paralyze the decision-making process by blocking key votes.

For example, in 2015 and 2016 opposition parties proposed costly legislative proposals (also known as “pauta bomba,” or “fiscal bombs”), which derailed government attempts to balance the budget. The caretaker government led by Brazil’s highly unpopular vice president, Michel Temer, is likely to face similar problems in the midst of a severe economic downturn.

As the Brazilian political scientist Mauricio Santoro has put it: “Temer may have a honeymoon, but let’s not forget this was a shotgun wedding.”

Although the corruption scandals have sparked huge protests against the government and the political establishment in general, many Brazilians are also concerned about unemployment and the implications of a change in government for jobs, salaries, and social welfare provision.

According to a recent Vox Populi opinion poll, one-third of those surveyed expected that the socioeconomic situation in Brazil would deteriorate under a Temer government, with particular concerns about job losses, social policies, education, and working conditions. Their dissatisfaction has also sparked demonstrations against impeachment, from noisy protests outside politicians’ houses to road blocks and street demonstrations.

The rancor on both sides shows just how polarized Brazilian society is becoming—and the trend is unlikely to slow as the political crisis evolves.

The next step is Rousseff’s impeachment trial in the Senate, which will be overseen by the federal Supreme Court. At the end of the trial, which can last up to six months, the Senate will vote again to decide whether to permanently remove her from office, requiring a two-thirds majority. But whether she is deposed or not, the process will have done nothing to help solve Brazil’s deep problems.

Marieke Riethof is a lecturer in Latin American politics at the University of Liverpool in the U.K. This article was originally published on The Conversation.