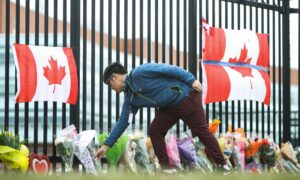 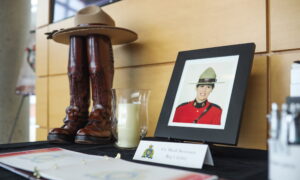 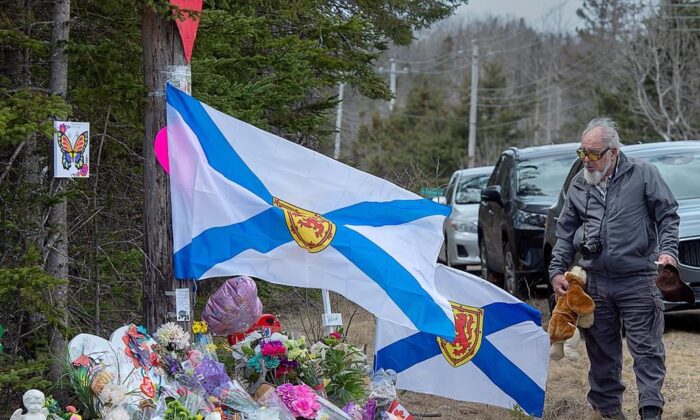 A man pays his respects at a roadside memorial in Portapique, N.S. on April 23, 2020. (The Canadian Press/Andrew Vaughan)
Canada

A tribute to the 22 Nova Scotians who died in one of Canada’s deadliest mass killings will stream on Facebook this evening.

The vigil, titled “Nova Scotia Remembers,” will include messages of support from local and national faces as an alternative to a physical ceremony while the COVID-19 pandemic forces limitations on crowds.

It will be livestreamed from the Colchester-Supporting Our Communities Facebook page at 7 p.m. local time, with CBC, CTV, and several radio stations carrying the broadcast.

A group of local residents, all with personal connections to the victims, have spent the week gathering recorded tributes from politicians, spiritual leaders, musicians, and other familiar Nova Scotian faces.

Tiff Ward, one of the event organizers, says the aim is not to dwell on the horrors of the weekend.

It’s to show grieving families that their community is with them in spirit while unable to drop off meals, hug each other or honour the dead by holding memorials.

“They matter to all of us and they matter to the world, and we want to show them the love that we have,” Ward said in a telephone interview.

Ward, like most residents of the tightly knit area, anxiously followed updates about the situation as it unfolded on Saturday and Sunday. She later learned several people she knew personally had been killed.

As horrific details emerged Sunday about the massacre that claimed lives across five communities, the new Facebook group became a space for people to grieve and process the loss together.

The idea for a vigil quickly grew out of the digital gathering. Prime Minister Justin Trudeau acknowledged his plan to attend the next day, while noting the challenges posed by COVID-19.

“I know that everyone will be looking for ways to demonstrate their solidarity without putting further at risk communities, first responders, our health professionals and our seniors,” Trudeau said Monday.

“They are such a connected group that I know that the vast majority of Nova Scotians will have a direct link with one or more of the many victims, and the entire province—and the entire country—is grieving right now as we come to grips with something that is absolutely unimaginable.”

Ward said the community can’t be defined by the terrible acts of a man who set fire to homes and shot people dead during a 14-hour rampage.

“This is just the most peaceful, smallest, gentlest, kindest place in the world. And a monster has shattered that,” Ward said. “We have to bring a lot of light to shine out this awful darkness.”

The National Police Federation is encouraging people to wear red Friday as part of a day of mourning for the victims, including RCMP Const. Heidi Stevenson, who was killed during the chase.

The RCMP is also encouraging members to observe a moment of silence at 2 p.m.

The past week has seen other shows of physically distant memorializing. Photos shared on the Facebook group from Nova Scotia and beyond show candles lit in windowsills and the provincial flag hanging in windows.

Municipalities and police forces across the country have flown flags at half-mast this week to honour the victims.

Richard Mills, acting U.S. ambassador to Canada, said Thursday that he had ordered flags to be lowered to half-mast in honour of Stevenson and the other victims, noting the close relationship between the U.S. government and the RCMP.

“RCMP officers provide an essential security service to our embassy and consulates across Canada. We appreciate their service,” he said.