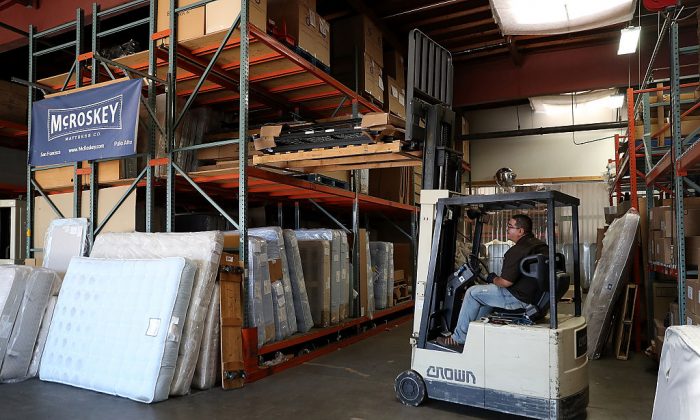 A worker operates a forklift at McRoskey Mattress Company in San Francisco, California on Aug. 9, 2016. Investment in new machinery has dropped from 8 percent of GDP in the 1970s to around 6 percent of GDP today, according to JPMorgan Chase. (Justin Sullivan/Getty Images)
Companies

An increasing share of capital investment has shifted away from equipment to intellectual property, helping companies to borrow less
By Emel Akan

Commercial and industrial lending has been unusually weak, as the investment pattern of businesses has changed dramatically in recent years.

Business lending was rising at a double-digit rate until 2014. In the last four years, however, lending growth has been sluggish and this has nothing to do with the boom-and-bust business cycle, according to JPMorgan Chase.

“But there is little reason to believe this late-cycle slowdown in commercial borrowing is a sign of fading confidence.”

The rise of the digital economy has created a seismic shift in the borrowing patterns of companies, Glassman explains. Instead of borrowing more to fund big-ticket purchases like industrial machinery and equipment, companies make incremental investments in intellectual property and software.

Investment in new machinery and equipment was 8 percent of Gross Domestic Product (GDP) in the 1970s. Today it is around 6 percent of GDP, but total capital investment has not changed at all.

“When outlays for intellectual property are included, capital expenditures account for a near-record high of 10 percent of all economic activity,” stated Glassman.

Investments in software are less directly tied to the economy, whereas investments in equipment are highly cyclical.

“If a manufacturer wants to increase capacity, they likely will have to borrow to purchase new machinery. But when a digital services firm expands, the licensing fees for running software on additional machines may be negligible,” Glassman wrote.

Business investment, one of the four components of GDP, has been strong in recent quarters.

Companies have accelerated their capital investments as a result of tax reform. Nonresidential fixed investment—which includes spending on equipment, structures, and intellectual property—increased by 10.4 percent annually. Investment in intellectual property jumped by 13.2 percent, highest since the third quarter of 1999.