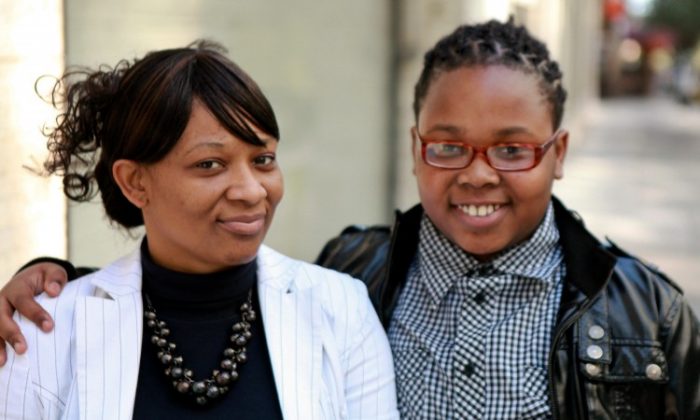 Feng Cheng and her father. (Zachary Stieber/The Epoch Times)
US

NEW YORK—Eighth-graders and their parents descended on Martin Luther King Jr. Educational Campus near Lincoln Center Sunday, narrowing down their list of prospective high schools amid the competitive environment of high school admissions.

Every eighth-grader in the city must apply for high school. Some students know what they want to learn—for example, performing arts—thus having an automatic filter. For others, the wealth of options means narrowing down a specific school can be difficult.

“All the schools are good,” said Shenee Zambrano, sitting next to her mother outside the fair. “I don’t know which to pick.”

Yet some schools are better than others. The nine specialized high schools are recognized as high-level, and after these come others that are also highly sought after.

Ava Demayo has schools on her wish list from both of these categories. Demayo and her grandmother Mary talked with representatives, including students, from one of her top choices, Eleanor Roosevelt High School.

“I learned that if you have good grades, you have good attendance, and you’re just an overall good student, they’ll take a real good look at you and you’ll be a prime candidate,” the younger Demayo said.

A main draw for Ava is early college integration. Students at Eleanor Roosevelt can get college credits. Manhattan/Hunter Science High School, which she discovered at the fair, even has a senior year program at Hunter College.

“That’s even cooler because you’re actually living the college life even though you’re not in college,” Ava said.

A potential downside to the process is intense competition to get into the top schools. Prospective students take a specialized test for the specialized high schools, and do other work such as writing essays and compiling portfolios of their schoolwork for other schools.

A similar but more subdued process takes place for middle-school admissions. The Demayos felt Ava was wronged when none of her four middle-school choices accepted her, causing her to be placed in another school, West Prep Academy. Through an appeal Ava was able to avoid what her grandmother said was a violent environment and go to Mott Hall II, which has suited her well.

A competitive system does exist, said Susan Cofield, executive director of Manhattan enrollment for the city’s Department of Education.

Yet the high-school fairs present schools to parents and students that they might not have known about before.

When passing by booths for unfamiliar schools a family may say, “‘Oh, I’ve never heard about this school,’ and stop to meet with the representatives, and hopefully see that there are other options, other than the ones you may have tunnel vision on,” Cofield added.

When choosing schools, families should consider factors such as extracurricular activities offered, commutes, and opportunities for parental involvement, states the website of the city’s Department of Education.

Following other borough high-school fairs over the weekend, the Manhattan borough fair showcased the majority of the more than 120 high schools in Manhattan, as well as several schools from other boroughs, such as the Bronx High School of Science.

That school has made it to the top of Emmanual Allen’s list, just above Columbia Secondary School. Allen found talking to representatives from the school, who told him about the school’s history and how they help students, beneficial.

“They even gave us more than we thought because they gave away pizzas for enrolling,” he said.

Allen was one of the students who didn’t seem concerned about the competitive race for the best high schools.

Like Allen, Ethan Ortiz, an aspiring information technology professional or videogame creator, and his mother found only two schools worthy of mention: the Urban Assembly Gateway School for Technology and the newly opened Academy for Software Engineering in Union Square.

Meanwhile, Feng Cheng, who is interested in business, and Gaby Irizarry, who doesn’t know what her focus will be, are having trouble identifying top schools.

The plethora of schools contributes to the uncertainty but the plethora of specialties complicates things even more, said Irizarry, flipping through the 540-page high-school directory.