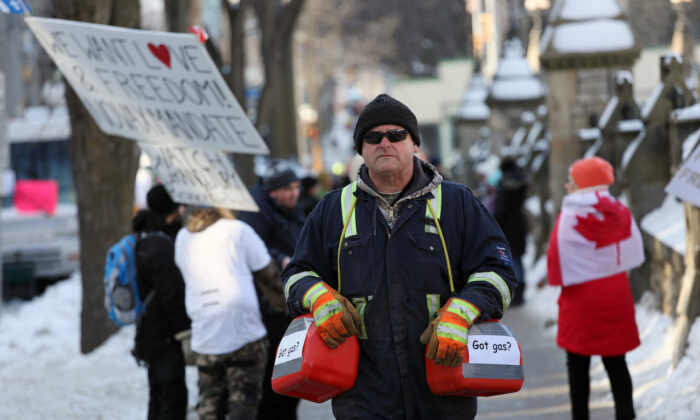 OTTAWA—It was a cold day on Feb. 11 and the move was probably slightly provocative.

OK, it was very provocative at a protest site against COVID-19 mandates and restrictions, to have a sign saying “Go home terrorists.”

Particularly when the gathered throng—drivers and supporters of a 400-truck protest that has blocked streets in the inner sanctum of Canada’s capital city Ottawa—was never going to like it.

But that wasn’t going to stop Deana Sherif of Ottawa—a self-confessed activist—standing with a red-rag sign to make her point.

Sherif was angry and this wasn’t her first visit to the protest area to make sure people knew about her concerns about the protest.

Her bugbear was the Shepherds of Good Hope organization that helps homeless people, and reports that some protesters harassed staff at the shelter on the first day of the protests on Jan. 29, demanding food.

“When I was talking to [protesters] they didn’t seem to understand the impact they were having on the residents of Ottawa,” she said.

“They thought it was just a mild inconvenience.”

During her interview with The Epoch Times, supporters of the protest blockade rounded noisily on Sherif, and she told them that she did not have a problem talking with them or giving her point of view to them not being vaccinated or not wanting to wear a mask.

“We have a problem with the fact there is abuse on residents of our city and a problem with you stopping or slowing the travel from countries that bring us food or supplies and allow Canadians to work,” she said, seemingly referring to separate protests blocking Canada-U.S. border crossings.

Epoch Times reporters on the ground since the start of the protest haven’t seen any visible signs of abuse or violence. The most common complaint about the protests in the earlier days was the sound of horn honking throughout the day. A court on Feb. 7 imposed a 10-day injunction to stop the honking.

Just down the way, life was more peaceful.

Marie Eye was chopping onions so she could make soup.

Eye is from Quebec and she came along to support the protest.

“I came from the first morning and it kind of evolved; and now I have this nice little soup project,” she said.

“I never liked making soup so much. It just brings people together.”

She said it “was just like a magic potion.”

Local resident Bobby Smith had also taken to Wellington St. E, but he was unhappy about the effect the protest was having on the people of Ottawa.

“There are a lot of residents who have been experiencing menacing behavior—verbal threats, verbal assaults, even physical assaults from the people who have latched on to the [protest] convoy,” Smith said.

“There are a lot of people around here who are feeling fearful. There’s been vandalism.”

The allegations are among several that have been made against the protesters, including by politicians. Protest organizers insist that the protests are peaceful.

One of the more prominent allegations involved an alleged arson incident at a building in the area, which social media posts blamed on protesters. The mayor of Ottawa and the federal MP representing the riding also cited the incident, while asking protesters to leave. There were many peculiarities about the incident, including the fact that the police only responded to it after someone posted about it on social media the day after it was alleged to have occurred, and no evidence has been provided that protesters were involved in the incident.

Smith said he understood people’s frustration over the pandemic and the “boomerang” changes in policies.

“There’s legitimate frustration down here but, unfortunately, some bad behavior that has spilled over into the neighborhoods that has people feel threatened,” he said.

“That’s what I came to say and respectfully ask for the convoy to go.”

The reaction has been mostly respectful conversations, he said.

“I’ve had some people yell at me, but no threats.”

Not far away, a mini music festival was being played from the back of a stage set on a large trailer and a structure known as The Shed.

The crowd was enjoying the sounds and many waved Canadian flags—of all sizes—in unison to whatever grabbed their musical fancies.

When “Footloose” was played the crowd cut loose.

Away from the main action truckers were just chilling in their vehicles.

Howard Spencer, 44, from near Vancouver arrived two weeks ago.

“I’m here to stand up for everyone’s rights and freedoms.

“I’m not an anti-vaxxer. We have a Bill of Rights and I think that’s been lost by the powers that be and we need to get back to that and get back to our freedoms. I think they are eroding.”

Spencer said he was going to stay as long as it takes.

He said he was losing money but that was not of concern. Spencer said it was all about the principle. “I feel this is the right thing to do.”

His aim was for politicians to “drop all the mandates and get back to our lives that we are used to.”