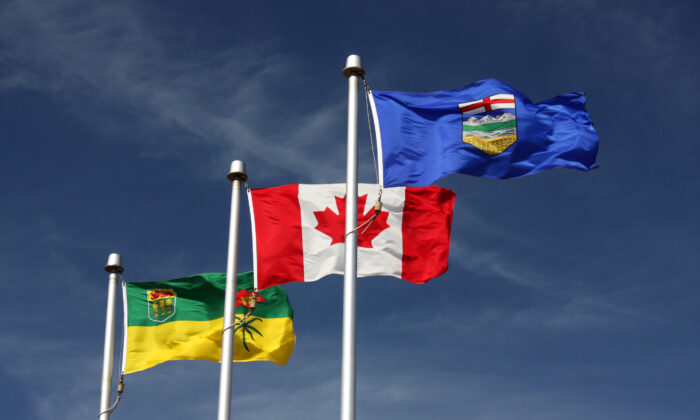 The flags of Saskatchewan, Canada, and Alberta flying in Lloydminster in a file photo. (Public Domain)
Canada

Differing COVID-19 Orders a Challenge for Boundary City of Lloydminster

LLOYDMINSTER, Alta.—Gerald Aalbers lives and works in Alberta, but he can see Saskatchewan from his office window.

As the mayor of Lloydminster, which straddles the Alberta−Saskatchewan boundary, he’s dealt with some unique situations.

Now, he says, the city is in the middle of one of its biggest challenges yet as it navigates the COVID-19 pandemic.

“It’s very difficult,” Aalbers said in an interview with The Canadian Press.

Residents of the city, which has a population of about 31,000, follow provincial laws on each side of the boundary.

The city itself, however, is governed by a Lloydminster Charter, which determines whether it follows Alberta or Saskatchewan legislation.

When Alberta declared a public health emergency on March 17, he said officials checked the city charter and it said Saskatchewan’s Public Health Act applied to the whole city.

The next day, Saskatchewan declared a state of emergency under its Emergency Planning Act.

Aalbers said officials again looked at the city charter and it follows Alberta’s Emergency Management Act so the Saskatchewan declaration didn’t apply either.

“This led to a discussion at city council with administration,” said the mayor, who explained council decided to issue its own local state of emergency under Alberta’s Emergency Measures Act.

Then Saskatchewan introduced new guidelines to help contain the spread of the novel coronavirus under the Public Health Act.

“So we followed their guidelines because they were even a little more stringent [than Alberta’s],” Aalbers said.

On Thursday, the Saskatchewan government outlined a five−phase plan to reopen parts of that province’s economy. It includes timelines for when certain businesses and services closed to protect against the spread of the virus could be allowed to open their doors.

Aalbers said Lloydminster is again reviewing how to move forward before those changes come into effect in May.

“This is a challenging spot,” he said. “We have people, I’m sure, in the city who are worried either way.

No matter what the city decides, Aalbers said he wants people to remember that they must continue physical−distancing measures and keep washing their hands.

“We just don’t want to be spreading it no matter what,” he said.

Saskatchewan’s health authority issued a special notification April 9 about positive cases in the Lloydminster area, but Aalbers said it doesn’t appear there have been any outbreaks in the city to this point.

“Hopefully we can get through this sooner than later.”