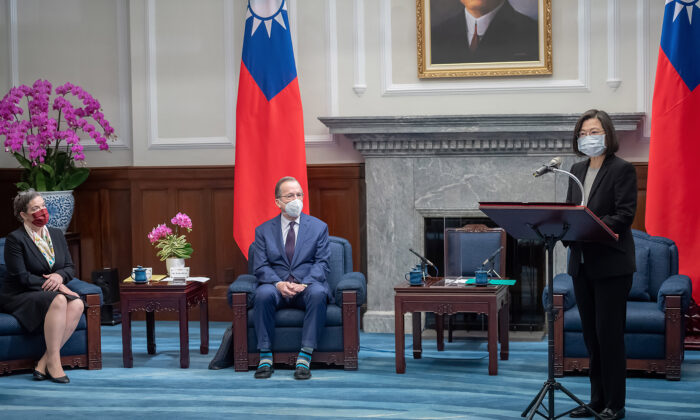 Taiwan's President Tsai Ing-wen (R) speaks as Former Chairman of the Joint Chiefs Adm. Mike Mullen (C) listens during a meeting in Taipei, Taiwan, March 2, 2022. Maintaining peace and stability across the Taiwan Strait is "not just a U.S. interest, but also a global one," former Chairman of the U.S. Joint Chiefs of Staff Mike Mullen said Wednesday during a visit to Taiwan that comes amid the backdrop of Russia's war against Ukraine. (Taiwan Presidential Office/via AP)
International Relations

Differences and Similarities Between Russia-Ukraine and China-Taiwan Crises

As the entire world is paying close attention to the Russia-Ukraine war, Taiwan has become a highly searched keyword on the internet. Many are saying they are worried that Taiwan will become the next Ukraine.

In addition to “Ukraine,” “Putin,” and “NATO,” Taiwan also became a Twitter trend on Feb. 25. By evening that day, the number of tweets containing the word “Taiwan” reached 465,000.

Taiwan’s presidential office issued a statement on Feb. 25 announcing its decision to join democratic countries in imposing sanctions on Russia over the invasion of Ukraine. In response, the Chinese Communist Party’s (CCP) Taiwan Affairs Office criticized the statement as a stance of “Taiwan Independence” and issued a warning. This news also made the top five on Weibo’s hot search list, with more than 120 million page views on that day. Weibo is a Twitter-like social media platform in China holding a monopoly position, as Twitter is completely banned in the country.

Taiwan’s geopolitical status with respect to the CCP, indeed has certain similarities with Ukraine being taken over by Russia.

On the evening of Feb. 21, Russian President Vladimir Putin emphasized in a televised speech at the Kremlin that “Ukraine is not just a neighboring country for us. It is an inalienable part of our own history, culture and spiritual space.”

The CCP has repeatedly made similar statements on the issue of Taiwan, saying that “Taiwan is an inalienable part of China.” The CCP has long been eyeing Taiwan, and has frequently dispatched military aircraft flyovers to threaten Taiwan in the past two years.

However, Frank Xie, a Professor of Business at University of South Carolina Aiken, believes that the outcome of Russia’s attack on Ukraine may affect China’s attitude towards Taiwan.

In a Feb. 25 interview with The Epoch Times, Xie said that if the West cowers and dares not stand up to Russia’s attack on Ukraine, it will give Beijing a clear signal that Europe and the United States are not a daunting threat, and thus give Beijing the audacity to attack Taiwan.

However, Xie mentioned there are also differences between Russia-Ukraine relations and China-Taiwan relations.

“Putin’s only goal is to overturn the current Ukraine administration and replace it with a pro-Russia president who will promise that he will never join NATO. As soon as this promise is attained, Putin may withdraw Russian troops immediately,” he said.

The situation is very different for the CCP’s goal with Taiwan. Chinese leader Xi Jinping on Oct. 9, 2021 vowed to reunify Taiwan, claiming that reunification is a historical task that must be accomplished and that Beijing “reserves the rights of use of force and the option to take over Taiwan with all necessary measures.”

Yao Cheng, a former lieutenant colonel of the Chinese Navy Command, who left China and defected to the United States years ago, said on Twitter that he thinks Putin does not intend to expand the Russia-Ukraine war, nor does Russia plan to fight against NATO on the long term. Yao believes that Russia will withdraw its soldiers before NATO sends any troops. “The important thing now is to pay close attention to the trends of the Chinese military. Once a war begins across the Taiwan Strait, it will be a real world war,” he wrote.

Toronto-based senior Chinese commentator Shi Tao said in his Youtube program on Feb. 22 that Putin chose to act immediately after the Beijing Winter Olympics, which indicates he had likely communicated with China’s Xi. “That was also one of the reasons Putin went to Beijing to attend the opening ceremony of the Olympic games,” he said, “Then, next, whether Xi will take concrete action on Taiwan is a very reasonably inference.”

According to Shi, if Xi and Putin echo each other, and if the CCP subsequently provokes disputes in the Taiwan Strait,  Western society may not be able to deal with both incidents at the same time.

“The level of sanctions imposed on Russia by the Western society is going to be a test version, not to mention that Russia’s overall strength is far inferior to that of China,” Shi said. “Will the United States and the European Union be able to bear the harm brought upon themselves by sanctioning China? All these concerns will make them hesitate.”