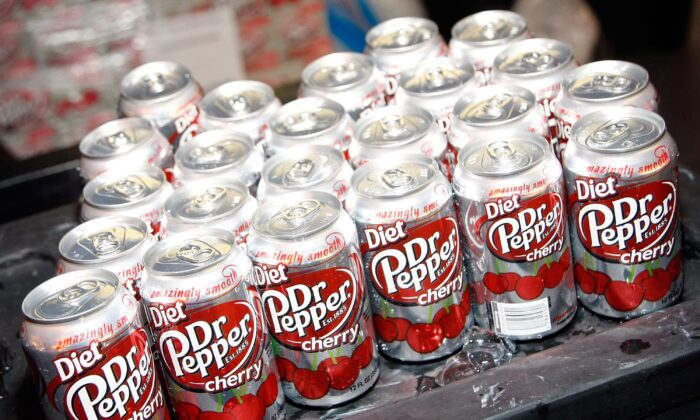 A general view of Diet Dr. Pepper Cherry cans during the Academy of Country Music all-star concert at the Fremont Street Experience in Las Vegas, Nev., on April 3, 2009. (Ethan Miller/Getty Images)
US News

A federal appeals court said soda companies that use “diet” in their branding did not intentionally deceive consumers into thinking those drinks would lead to weight loss.

Judges of the Ninth U.S. Circuit Court of Appeals upheld a lower court decision to dismiss a lawsuit (pdf) brought forward by California resident Shana Becerra claiming that the makers of Diet Dr Pepper had misled consumers by using “diet” on its labels and utilized “attractive, fit models” in its advertising.

Becerra’s lawyers asserted that the use of the word “diet” was promising consumers that the drink would “assist in weight loss” or at least “not cause weight gain” although studies show aspartame, the artificial sweetener used in Diet Dr Pepper, is likely to lead to weight gain and does not have any effect on weight loss.

The three-judge panel rejected Becerra’s arguments, saying that she failed to show that a reasonable consumer would think the word “diet” in Diet Dr Pepper was actually promising “weight loss, healthy weight management, or other health benefits.”

Judge Jay Bybee wrote in the decision that the word “diet” needed to be considered in its context including whether it was being used as a noun, verb, or adjective. The judges ruled that the “diet” in Diet Dr Pepper was used as an adjective or a proper noun, which puts it in a different light.

“When considering the term in its proper context, no reasonable consumer would assume that Diet Dr Pepper’s use of the term “diet” promises weight loss or management,” Bybee wrote.

He also added that the more common understanding of the term is that “the ‘diet’ version of a soft drink has fewer calories than its ‘regular’ counterpart.”

“Just because some consumers may unreasonably interpret the term differently does not render the use of “diet” in a soda’s brand name false or deceptive,” he wrote.

The ruling on Monday is the latest in a series of lawsuits against soda companies over their use of the word “diet” in their branding. The appeals court noted that they had dismissed a similar case Becerra brought against the makers of Diet Coke for lack of jurisdiction (pdf) because a lower’s court decision was not final. If Becerra decides to pursue that case, Monday’s ruling is likely to be applied in that case.

Lawyers for Becerra and Dr Pepper did not immediately respond to a request to comment.