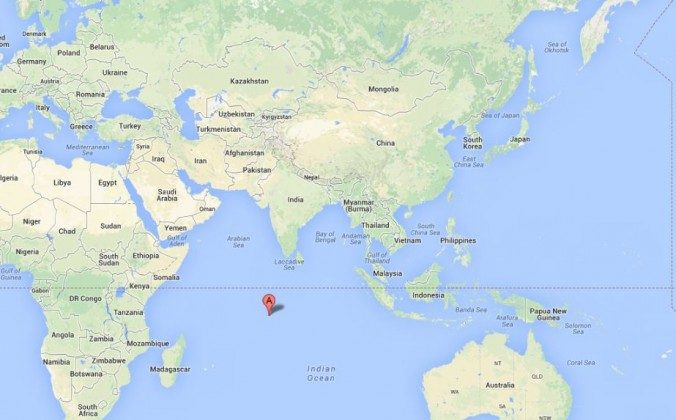 An American official in Kuala Lumpur said that missing Malaysia Airlines Flight MH370 is not at Diego Garcia, an island military base located in the Indian Ocean amid speculation that it landed there.

An embassy spokesperson told the Star Online newspaper in Malaysia that the missing plane didn’t land on Diego Garcia, which has a runway.

The plane, which went missing March 8, flew nowhere close to the Maldives or Diego Garcia, the official said.

“There was no indication that MH370 flew anywhere near the Maldives or Diego Garcia. MH370 did not land in Diego Garcia. Under the coordinating efforts of Malaysia and Australia, the US Navy’s Seventh Fleet is working alongside 26 other nations to locate the aircraft based on areas identified by Malaysian and international experts,” the U.S. embassy spokesperson wrote in an e-mail, according to Star Online.

Over the past few weeks, conspiracy theory websites have claimed that the plane was on Diego Garcia. One website in particular claimed IBM engineer Philip Wood, who was believed to be on the missing plane, took a photo on Diego Garcia and uploaded it online. However, it was determined that the photo and message was actually put on 4chan.org, a popular website that’s spawned numerous Internet hoaxes in the past.

The missing plane, which was going from Kuala Lumpur to Beijing, had 239 people on board.

And with no new underwater signals detected, the search for the missing Malaysian passenger jet resumed Saturday in a race against time to find its dying black boxes five weeks after families first learned their loved ones never arrived at their destination.

The ocean search area has been condensed, as ships and planes hunted for any clue that could help find Flight 370, which disappeared en route from Kuala Lumpur, Malaysia to Beijing with 239 people on board, mostly Chinese.

Australian Prime Minister Tony Abbott told Chinese President Xi Jinping that he was confident signals heard by an Australian ship towing a U.S. Navy device that detects flight recorder pings are coming from the Boeing 777. Officials believe the plane flew off course for an unknown reason and went down in the southern Indian Ocean off the west coast of Australia.

“We’re getting into the stage where the signal from what we are very confident is the black box is starting to fade,” Abbott told reporters Friday in Shanghai, referring to the plane’s flight data and cockpit recorders. “We are hoping to get as much information as we can before the signal finally expires.”