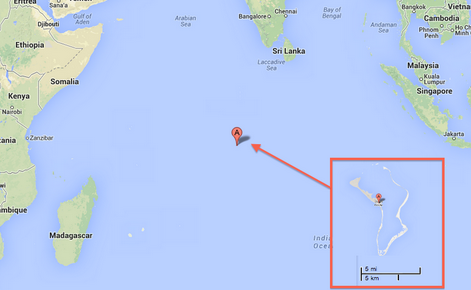 The small island atoll is home to a U.S. base and has been the subject of several linked theories.

The most recent one came after what appeared to be an all-black photo was posted on 4Chan, a social media website on which many hoaxes are perpetuated.

“I have been held hostage by unknown military personal after my flight was hijacked (blindfolded),” the poster said. “

I work for IBM and I have managed to hide my cellphone in my [expletive] during the hijack. I have been separated from the rest of the passengers and I am in a cell. My name is Philip Wood. I think I have been drugged as well and cannot think clearly.”

However, experts dismissed the claim, including people on the forum Metabunk, saying that the GPS data cited by some bloggers as proof of the Diego Garcia theories was replaced.

“It’s nonsense because it’s so easy to fake GPS EXIF data. Here’s the same ‘photo’ with the EXIF moved to the Flamingo hotel in Las Vegas,”said one poster.

“Since it’s such a trivial thing to fake, and combined with the ridiculous narrative of smugging an iPhone 5 up his rectum, and the image being black (iPhone 5 has a flash) the only sensible conclusion is that this is a hoax.

“The originally posted photo seems to have been clumsily faked using the free software “Picasa”, which left an indication in the EXIF data, adds extra “Photoshop” metadata, and stores the GPS data in a different format.

“This is so preposterous yet it’s gone viral as so many are willing to believe it. I’m particularly sad about such conspiracy theories because of the effects it has on the relatives.”

Now the U.S. government has come into the conversation, calling the theories groundless.

“This is a baseless conspiracy theory that has already been debunked around the world, and the White House Press Secretary specifically addressed this on March 18,” said the embassy’s press attaché Harvey Sernovitz, reported the New Straits Times.

“These reports are completely false. MH370 did not land in Diego Garcia. This is a baseless conspiracy theory.”

Sernovitz also denied that the U.S. withheld any information from the Malaysia government and that the U.S. was among the first countries to respond to help with the widespread search and rescue mission.

“I encourage you to ask the Malaysian government to describe the assistance it has received from the US government and companies.

“In the meantime, we continue to provide all relevant technical, investigative and search and recovery support as requested by the government of Malaysia. We will continue to share information and analyses about MH370.”