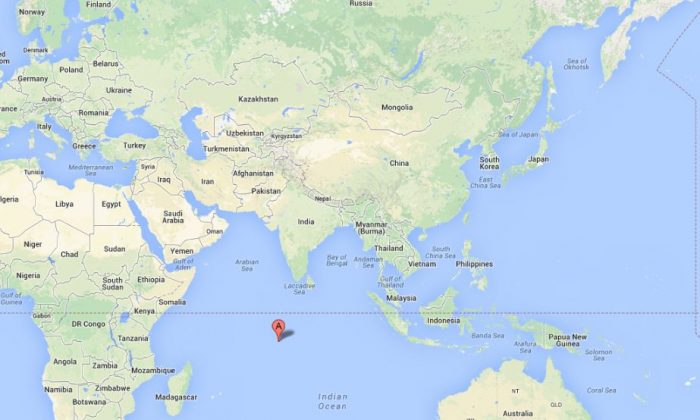 Diego Garcia, a U.S. military base on a coral atoll in the central Indian Ocean, was not the landing site of missing Malaysia Airlines Flight MH 370, a Malaysian official said.

Malaysian Acting Transport Minister Datuk Seri Hishammuddin Tun Hussein refuted claims that the missing jet landed on the atoll’s military base, according to the Borneo Post.

There were reports and rumors that the plane landed on Diego Garcia–a footprint-shaped atoll located about 2,000 nautical miles east of the coast of Tanzania and 2,500 miles from the Australian west coast and is located in the British Indian Ocean Territory. Conspiracy blog JimStoneFreelance.com said that “Diego Garcia remains by far the most highly probable location for flight 377.”

Naval Support Facility Diego Garcia “provides logistic support to operational forces forward deployed to the Indian Ocean and Persian Gulf areas of responsibility in support of national policy objectives” and is on “an atoll of the Chagos Archipelago in the British Indian Ocean Territory, located 7 degrees south of the equator.”

The U.S. Navy operates a Naval Support Facility on Diego Garcia, which includes a naval ship and submarine support base, a military support base, a space-tracking facility and communications base, and an anchorage.

On Twitter, users were asking questions about Diego Garcia.

“Has the US Navy said anything about their radar at Diego Garcia? If the plane went to the Ind, ocean they should have had it on their radar,” one person wrote last week.

Malaysian Prime Minister Najib Razak last week said that the massive search for the plane is now focused on the Indian Ocean, among other areas.

Hishammuddin refuted similar claims, and he also said there was also no ransom sought by any part.

“No, there has not. And that makes it very difficult for us to verify whether it is hijacked or terrorist (act of terrorism). (We look into) all possibilities. We don’t take (anything) for granted,” he said.

Hishammuddin added that aircraft communications addressing and reporting on the plane’s system were disabled before the last pilot communication, which was “alright, good night.”

The Associated Press Has the latest information on search for Malaysian plane:

The unprecedented hunt for a missing Malaysia Airlines jet expanded northwest to Kazakhstan and south into the desolate reaches of the Indian Ocean after Malaysian authorities concluded the plane was deliberately diverted. A summary of the latest information on the search for the plane and the investigation into what happened:

The Boeing 777’s Aircraft and Communications Addressing and Reporting System, or ACARS, last transmitted at 1:07 a.m., about 30 minutes after takeoff. ACARS sends information about the jet’s engines and other data to the airline.

The final, reassuring words from the cockpit — “All right, good night” — were believed to have been spoken by co-pilot Fariq Abdul Hamid, according to Malaysia Airlines CEO Ahmad Jauhari Yahya.

The transponder, which identifies the plane to commercial radar systems, shut down about 1:20 a.m., and an ACARS update that was due at 1:37 a.m. was never sent.

After its communications ceased, the plane turned west and crossed the Malay Peninsula. Military radar detected it moving along a known flight route until it was several hundred miles (kilometers) offshore.

Even disabled, ACARS emits hourly pulses that are recorded by a satellite, and Flight 370’s last “ping” was sent at 8:11 a.m. The location of the plane could only be determined in a broad arc from the satellite, which places the jet as far north as Kazakhstan in Central Asia or far into the southern Indian Ocean. The plane would have been near the limit of its on-board fuel supply.

Malaysia’s government sent diplomatic cables to relevant countries to seek their help with the search and ask for any radar data that might help narrow the task. Twenty-six countries are involved in the search.

The northern search corridor includes countries with busy airspace that likely would have noticed an unidentified aircraft in their territory. China, India and Pakistan are among the nations that say they have seen no sign of the plane.

Australia is leading the search efforts in the southern Indian Ocean. It has sent two AP-3C Orion aircraft, one of which is searching north and west of the Cocos Islands. Two more search aircraft will be deployed by Tuesday.

The southern Indian Ocean is the world’s third-deepest and one of the most remote stretches of water in the world, with little radar coverage. Experts say if the plane crashed there, finding the wreckage could take months or longer, if it is found at all. Establishing what happened with any degree of certainty will require evidence from cockpit voice recordings and the flight-data recorders, which are on board the plane.

The investigation is focusing on the plane being deliberately diverted by the pilots or someone on board with considerable flying experience. Police seized a flight simulator from the pilot’s home on Saturday and also searched the co-pilot’s home. Investigators are checking backgrounds of all 227 passengers and 12 crew members, as well as the ground crew, to see if links to terrorists, personal problems or psychological issues could be factors. But authorities are being tight-lipped about what they’ve learned so far.

The whereabouts of the plane is only one question still unanswered. The investigators are also considering: If the two pilots were involved in the disappearance, were they working together or alone, or with one or more of the passengers or crew? Did they fly the plane under duress or of their own will? Did one or more of the passengers manage to break into the cockpit or use the threat of violence to gain entry and then seize the plane? And what possible motive could there be for diverting the jet?