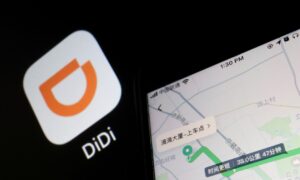 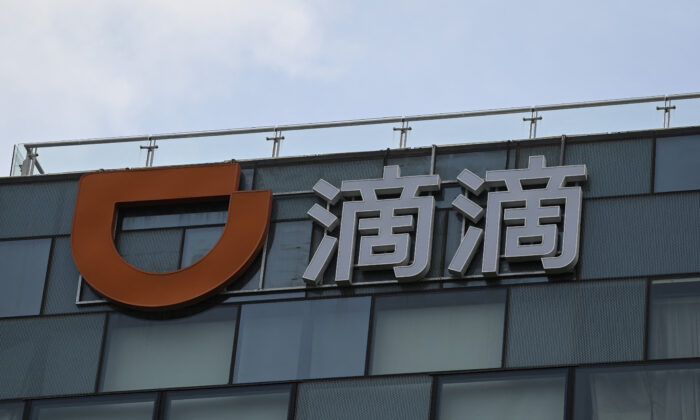 A logo of Chinese ride-hailing giant Didi Chuxing at its headquarters in Beijing on July 2, 2021. (Jade Gao/AFP via Getty Images)
Thinking About China

CCP scrutiny to slow parade of US IPOs of Chinese companies

The United States and China are beginning to agree on one thing—that Chinese technology companies selling shares on U.S. stock exchanges may not work.

The fallout of this was immediate and severe. Didi’s NYSE-listed shares plunged below the IPO price. Two lawsuits filed in New York and Los Angeles by investors accused Didi executives and its lead underwriting banks of failing to disclose ongoing investigations that occurred prior to Didi’s listing. Investment professionals from Kyle Bass to Jim Cramer decried the news and questioned whether Chinese stocks are investable.

There’s a lot to unpack here. But one thing is for certain: Chinese stocks will never be looked at in the way same going forward.

To start, the crackdown on Didi and other technology giants by the Chinese Communist Party (CCP) shouldn’t have been surprising. After the CCP scuttled Ant Group’s IPO last year, investors up-in-arms about Didi either haven’t been paying attention or haven’t done their homework.

We have to go back to the year 2000 for context. That year, Sina.com, which owns Weibo, became the first Chinese technology giant to IPO in the United States.

The CCP prohibits foreign ownership in industries it considers critical to national security, including the technology sector. Sina utilized a complicated legal structure involving a series of variable interest entities (VIEs) to circumvent Chinese regulations around foreign ownership. In essence, U.S. investors would buy shares in a Cayman Islands or British Virgin Islands (BVI)-registered shell company (the VIE), which in turn holds synthetic economic interests in the actual Chinese company through a series of legal agreements.

Put differently, it’s as if I owned a company and you wanted to buy it. But instead of buying me out and actually owning the company, you and I enter into a paper contract where I promise to pass all future profits of the company onto you in perpetuity. It’s not quite that simple, but it’s a passable illustration.

Since Sina’s landmark IPO, this practice has been the norm in offshore IPOs of Chinese technology giants ever since, including those of Alibaba, JD.com, Baidu, and, most recently, Didi.

So U.S. shareholders don’t actually own the company and have no real say or voting rights in how it actually does business in China. Case in point: Major Alibaba shareholders Yahoo and SoftBank had no say when Alibaba spun off the very valuable Alipay in 2011. The two shareholders were notably upset by company founder Jack Ma’s alleged asset-stripping, but had little recourse.

That isn’t a problem if the investors know what they’re signing up for when buying into Chinese IPOs. But the fact remains that this VIE structure is technically illegal in China: It’s a blatant circumvention of Chinese laws. The CCP has overlooked this for many years for a variety of reasons, but it was foolish for investors to believe that Beijing was never going to take action.

However, the same reasons that put U.S. investors at a legal disadvantage also handcuff Beijing regulators. China doesn’t have jurisdiction over Cayman or BVI, and the founders and executives of the Chinese technology giants could create other offshore entities personally owned by them to receive dividends and payouts away from Beijing’s watchful eyes, potentially dodging capital controls and taxes.

Rumors are already swirling that Beijing is scrutinizing the VIE structure. Bloomberg reported that the China Securities Regulatory Commission is requiring companies contemplating the VIE offshore listing structure to obtain regulatory approval prior to IPO.

Looking at Didi’s case specifically, the CCP appears to be concerned with data security.

The CCP craves monitoring and control of its populace. And in the information age, data is king. It’s why Beijing introduced a digital yuan. Cash can’t be tracked, and even mobile payment data via Alipay isn’t directly controlled by the Beijing government—it’s technically owned by the company.

Didi is China’s biggest ride-hailing app, and collects vast data on where Chinese people are going and when. The Holding Foreign Companies Accountable Act requires U.S.-listed Chinese companies to submit to U.S. regulatory audits, which could result in such data falling into American hands.

Never mind that few talks have taken place between U.S. and Chinese financial regulators to cooperate on audit work paper sharing. But this is one of Beijing’s official reasons for clamping down on tech companies.

There’s some speculation that Didi specifically was less than forthcoming with Chinese regulators ahead of its U.S. IPO. The South China Morning Post reported that China’s data security regulator asked the company to delay the IPO, but that request was ignored.

We won’t get into the machinations that may or may not have happened in Didi’s boardroom. Regardless of the reasons behind such investigations, it’s clear that raising foreign capital will become much harder for Chinese technology companies going forward.

It has already caused some consternation among Chinese tech giants considering a U.S. listing. On July 7, LinkDoc—a Chinese medical data provider backed by Alibaba—pulled its listing after building an IPO order book from potential investors.

For U.S. retail investors, China’s more hawkish view of offshore IPOs is likely a blessing in disguise. But for venture capital and private equity firms—such as early Didi backers Uber, SoftBank, and South Korea’s Mirae Asset Management—it has suddenly become harder to exit their investments. And without a guaranteed IPO payoff at the end of the road, will VC’s and PE’s flock to China in the first place?

U.S. regulators were already considering delisting some Chinese companies from American exchanges. Now, it appears that Beijing is doing their job for them.