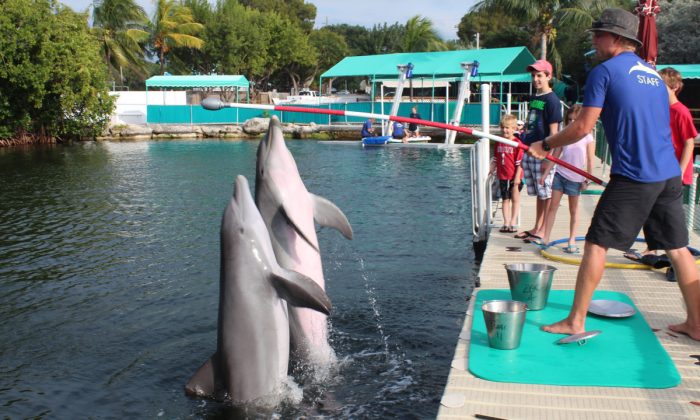 Did You Ever Swim With a Dolphin?

Dolphins are protected marine mammals. It is unlawful to capture or injure them in the wild. Among the most intelligent creatures on Earth, dolphins, especially the bottle nose dolphin, are seen by most people to be alluring and adaptable. While it is rare to be able to see them underwater in the wild and encounters are truly special events in the open ocean, programs have been developed that enable human interaction with dolphins.

One of the oldest dolphin swim programs is Dolphins Plus in Key Largo, Florida. Captured dolphins breed in captivity. In many cases they were owned by trainers before the Marine Mammal Protection Act was passed and were considered pre-act animals. Their use in swim programs in protected lagoons is permissible under federal and state laws that protect wild dolphins. Many pre-act animals were used in shows, educational programs and kept in aquariums.

In 1979 Dolphins Plus began promoting swim with the dolphins programs. It became such a success that they expanded operations using dolphins born in captivity. Dolphins Plus now has two locations. Both facilities are in Key Largo, Florida, one is on the ocean side at Mile Marker 99.5, the other in a cove at Mile Marker 101.5 on the bay.

Used successfully as therapy animals for decades, Dolphins Plus encourages interaction and fosters programs that enable young people with behavioral problems or unique issues to interact with their dolphins. There are dolphin experiences for all ages. One of the most popular programs is their Structured Swim Program. The bay side Dolphins Plus at Dolphin Cove is a large facility. There is ample parking, an office and gift shop, conference rooms and a covered outdoor briefing area.

Ethan Kleinschmidt, one of the trainers, took us down to the briefing area. He explained dolphin behavior and what to expect once in the water with them. “The dolphin population expanded through natural birth so this facility was opened on Valentines Day 1998. There is a twenty foot deep dolphin lagoon. A chain link fence is the only thing that separates our dolphins from Tarpon Bay,” he explained.

Water temperature varies in the Keys. Winter temperatures are in the 70s. In summer the water gets into the 90’s. Dolphins have blubber to insulate them from cold water. Their body temperature remains around 96.8 degrees F. “Dolphins have an ability to dump warm water by pulling in blood from their fins,” Ethan explained.

The fenced lagoon is subject to tide changes so it remains clean. Fish, lobsters and crabs also live in the dolphin lagoon. As fish grow they can no longer pass out through the chain link fence so make the lagoon and mangroves their home.

“We have a platform so kids can sit on their parents’ hips. In all we have eight male and four female dolphins at this facility,” the trainer said. Their ages run from baby Isaac who is 3 1/2 years old to Samantha that is over thirty. Ethan related that a dolphin at Marineland, that just died, was 62 years old.

“In the wild age depends on predators, the amount of food and their ability to fight disease. As dolphins age they become more suited as therapy friendly for kids. Some dolphins are more patient.” Ethan explained the behaviors we could expect once in the water with the dolphins. He cautioned about keeping fingers away from their eyes and blow holes.

Dolphins use echo location by sending out sounds from their blow holes in the top of their heads which come back as echoes. The echoes are interpreted through fluid in the lower jaw that receives the returning signal and transmits it to the brain. Dolphins like to be rubbed. Ethan said that dolphins shed their outside skin every three hours, likely ten times a day. It keeps them streamlined in the water. Rubbing dolphins is appreciated especially on their bellies.

Ethan stressed a few important rules, that would make common sense to most people, then got us fitted into wetsuits and life jackets. Trainers were working with dolphins when we arrived at the long lagoon side pier. We were to work with Julie age seven and Leo age ten. Brian was on the dock to take photographs of us in the water.

Across the lagoon trainers were giving dolphins their annual ultra sound check up. Down the dock youngsters were working with a trainer learning how natural behaviors are channeled so dolphins respond to hand signals and whistles trainers wear around their necks.

The winter water in the lagoon was a chilly 71 degrees F. Once in and absorbed by our two beguiling bottlenose dolphins the hour passed too quickly. Emily, the trainer assigned to work with us, had Julie and Leo swim underwater to us and blow bubbles from their blow holes. They presented their dorsal fins and gave high energy rides. There were feet pushes. Emily had us hold a large hoop and signaled the dolphins to jump through it. There were kisses as the dolphins put their faces into cupped hands and touched our faces.

Dolphins Plus’ structured swim last about 1 1/2 hours total. A half-hour for the briefing the rest of the time spent in the dolphin lagoon interacting. There are natural swim programs as well. Guests are supervised by a trainer but left to swim with the dolphins at their own pace in the lagoon. Dolphins Plus offers a shallow water experience and sea lion encounters.

For many families dolphin encounters are life changing experiences. Children become enthusiasts and remember the interaction with these marine mammals forever. Adults enjoy what is a unique exchange between marine mammals and humans in the dolphins’ lagoon environment. The experience is not only thrilling fun, it is educational. For more information visit www.dolphinsplus.com or call them at 305-451-1993 or 305-451-4060.