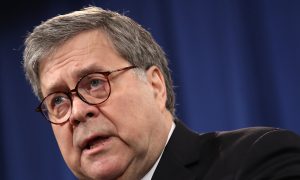 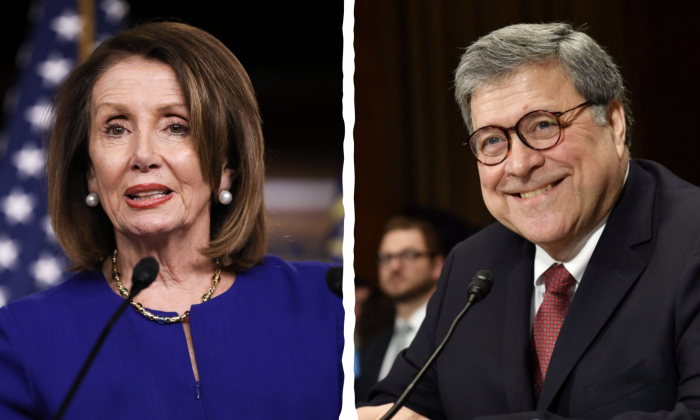 ‘Did You Bring Your Handcuffs?’ Barr Jokes With Pelosi

Attorney General William Barr uttered a few words that made headlines on Wednesday; he jokingly asked Speaker Nancy Pelosi (D-Calif.) whether she had brought her handcuffs, alluding to the Democrats’ calls for his arrest.

Barr approached Pelosi at the 38th Annual National Peace Officers’ Memorial Service on the West Front of the Capitol on Wednesday morning, May 15.

The two were in attendance, waiting for President Donald Trump, who was running about 45 minutes late, The Hill reported.

According to multiple reports, Barr shook Pelosi’s hand and said loudly, “Madam Speaker, did you bring your handcuffs?”

Pelosi smiled and told Barr that the House sergeant-at-arms was on site if an arrest was needed. Barr chuckled and walked away.

Today at a law enforcement ceremony at Capitol:

Pelosi smiled and, per a bystander, told Barr the House Sergeant at Arms was there should an arrest be needed. Barr laughed; walked away

The casual exchange comes after the Democrat-led House Judiciary Committee decided on May 8 for the full House of Representatives to vote on holding Barr in contempt of Congress.

Democrats accuse Barr of failing to comply with a subpoena for the release of the full, non-redacted report by special counsel Robert Mueller. But Republicans say the subpoena forces Barr into a legal Catch-22, since the attorney general would break federal law by disclosing grand jury material.

Barr had also made a joke about the contempt vote on May 9 at a farewell ceremony for former Deputy Attorney General Rod Rosenstein. Barr said, smiling: “This must be a record of [an] attorney general being proposed for contempt within 100 days of taking office,” according to ABC News.

Over the course of 22 months and at an estimated cost of more than $25 million, special counsel Robert Mueller investigated allegations of collusion between the Trump campaign and Russia to influence the 2016 presidential election. The Justice Department, led by Barr, released Mueller’s report, with redactions, to Congress and the public on April 18.

Mueller concluded that there had been no evidence of collusion between the Trump campaign and Russia to influence the 2016 presidential election, and declined to make a decision on whether the president had obstructed the Russia probe, leaving Barr and Deputy Attorney General Rod Rosenstein to conclude after reviewing Mueller’s arguments that there is not enough evidence to bring an obstruction case.

This resulted in the Democrats demanding to see beneath all redactions. Barr had outlined with the release of the report that the existing redactions were limited to four categories: grand jury material shielded from disclosure by federal law, intelligence sources and methods which if disclosed could be harmful to national security, the identities of people who were not ultimately charged with a crime, and the interests of peripheral third parties who were not ultimately prosecuted.

Barr responded to the Democrat request by offering select lawmakers to view a minimally-redacted version of the document, which withheld only the parts related to ongoing grand jury investigations. But House Judiciary Committee Chairman Jerry Nadler (D-N.Y.) argued that the rules for viewing the document were too strict. He issued a subpoena for the full unredacted report on April 19.

#HouseJudiciaryCommittee voted to hold #AttorneyGeneral Barr in #Contempt for his failure to release the #MuellerReport unredacted.

With the pendulum swinging the other way, Democrats are on a mission to try to destroy him.

“Faced with Chairman Nadler’s blatant abuse of power, and at the Attorney General’s request, the President has no other option than to make a protective assertion of executive privilege,” the White House press secretary Sarah Sanders said in a statement on May 8.