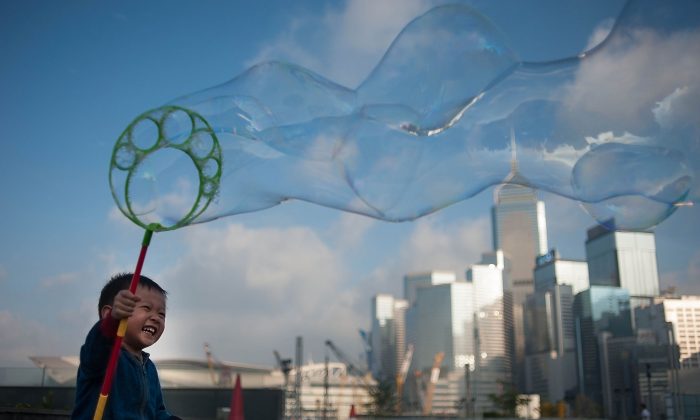 In this file photo, a boy waves a wand of bubbles up in the air in Hong Kong. (Anthony Kwan/Getty Images)
China

The Shanghai Composite Index dropped 6.4 percent last Friday, capping a 13 percent decline during a week, which some believe is the beginning of China’s stock market bubble bursting.

The percentage decline last week was the biggest weekly drop for the index since 2008, when the index crashed during the financial crisis.

Last week’s pullback followed months of speculation about a correction for the world’s best-performing stock market.

But over the last three months, the Shanghai Stock Exchange (SSE) experienced roller coaster-like volatility, with sudden gains and losses as traders wrestled with concerns of high valuation and skyrocketing margin debt at brokerages.

The Shanghai composite is currently trading at a forward price-to-earnings (P/E) multiple of 24, according to data compiled by S&P Capital IQ. That’s means Shanghai is the most overvalued major market in the world by that common measure.

Reminiscent of the 2007 Shanghai bubble, stock prices over the last 15 months were largely inflated by mom-and-pop investors buying shares on margin, or borrowing money from brokerage firms to purchase additional shares.

Such risk-taking is reserved only for experienced traders in the United States, but to many Chinese first-time investors, buying on margin is a simple way to get rich quickly.

Bloomberg estimated that Chinese investors owed a staggering $358 billion of margin debt as of June 15. Inexperienced traders held many of these accounts. Epoch Times reported on April 26 that 67 percent of new brokerage account applicants lacked a high-school diploma, citing a study by the Southwestern University of Finance and Economics in Chengdu, China.

This type of leverage means that any material selloff could quickly spiral out of control as stock traders rush to liquidate stock positions in order to meet the margin call. That would further drive down stock prices.

‘Tide Is Going to Go Out’

Some analysts see last week’s turn of events as the beginning of a major correction for the Chinese exchange.

“The tide is going to go out, and there’s going to be a lot of people without their swimming trunks on. We’re seeing it deflating quite rapidly,” Ewen Cameron Watt, chief investment strategist at BlackRock, told Bloomberg Television last Friday.

Morgan Stanley wrote in a note to clients last week stating that half of the investors it surveyed in June believed Shanghai A-shares were in a bubble state versus only 12 percent holding that opinion in January.

An X-factor is how the Chinese Communist Party would react to a major market correction.

China’s securities sector regulators in the last six months introduced several rules in an effort to cool off recent market gains, including restricting margin trading for certain investors and opening up the Shanghai Stock Exchange to Western money managers in Hong Kong hoping to short Chinese shares. But those measures failed to quell investor exuberance and the bubble continued to inflate.

An X-factor is how the Chinese Communist Party would react to a major market correction.

“Policymakers will step in if the market correction gets beyond a comfortable level,” Adrian Mowat, the chief Asian and emerging-market equity strategist at JPMorgan Chase & Co., said in an interview with Bloomberg in Hong Kong.

“I would imagine if the correction continues next week you will hear something reassuring.”

But considering today’s ailing Chinese economy and the speed and magnitude of the last (2007–2008) crash, this time there may not be any reassuring news to give.