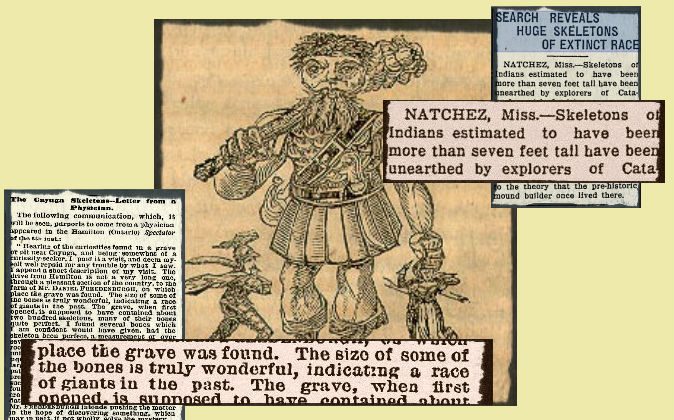 So much knowledge has been lost throughout the ages—destroyed by war, natural disasters, human ignorance, or simply by the erosion of time. However, with all that has been lost, much remains buried. Perhaps the clues to solving age-old mysteries are right beneath our feet.

In the search for evidence that giants existed, some have looked to the large mounds of the American Midwest, some to the massive and mysterious structures of the Middle East.

Abraham Lincoln stated, inspired by viewing Niagara Falls: “The eyes of that species of extinct giants, whose bones fill the mounds of America, have gazed on Niagara, as ours do now. Contemporary with the whole race of men, and older than the first man, Niagara is strong, and fresh today as 10,000 years ago.”

The shadows of real giants loom large, some say, in the legends of many cultures. The controversial discoveries of skeletons measuring 7 feet to more than 9 feet tall, along with other artifacts, have suggested to some that truth inspired these legends.

Researchers who explore these possibilities, and often face ridicule from more conventional scientists, say that in the remote past giants with a median height of 7 feet or taller occupied the Earth alongside humans of roughly our size. Moreover, these giants may have had their own culture, civilization, and perhaps even several nations or races of giants may have existed at different times and in different places.

The Bible references giants several times and in many sections. Genesis 6:4 in the King James Bible states: “There were giants in the Earth in those days; and also after that, when the sons of God came in unto the daughters of men, and they bore children to them, the same became mighty men which were of old, men of renown.” In other versions of the Bible, the “giants” are referred to as “Nephilim.”

Goliath, of the famous battle of David and Goliath (Samuel 1:17), was said to be approximately 9 feet and 9 inches tall, according to Bible Gateway. Goliath was the champion of the Philistine army; the young David stunned him with only a sling and stone, slaying Goliath moments later with his own sword.

MORE: Did Giants Exist? Part 2: Where Are the Skeletons Now?

Ancient Greek mythology tells of titans, the giants of prehistory. The primordial goddess Gaea gave birth to the titans, giants who walked the earth before the Olympians and man. Unfortunately for the titans, the Olympians would eventually overthrow them, banishing them to oblivion or eternally torturous tasks.

Pliny the Elder wrote in his famous “Naturalis Historica,” completed in 77 A.D., that giant skeletons had been found. He cited ancient sources, as did the 1st century Roman historian Titus Flavius Josephus, who mentioned multiple times the existence of giants in an earlier age.

The Mayans also have a giant story. Cabrakan, last of the Earth-giants of Guatemala, was so mighty he could throw mountains. But, alas, he was eventually tricked and poisoned by the Hero Twins, ending his prideful earthquake-causing ways, according to “The Myths of Mexico and Peru,” by Lewis Spence of Ball State University.

Did Early Explorers Find Giants in the New World?

In 1608, explorer John Smith wrote: “The Sasquesahanougs are a Gyant-like people.” He described them: “They measured the calf of the largest man’s leg, and found it three quarters of a yard about, and all the rest of his limbs were in proportion; so that he seemed the stateliest and most goodly personage they had ever beheld. His arrows were five quarters yard long, headed with the splinters of a white chrystal-like stone …”

Hernando de Soto, a 16th century Spanish explorer who delved deep into the territory of what is today the United States, also described men half a yard taller than his tallest men.

Legends of giants are found among the Iroquois, the Osage, the Tuscaroras, the Hurons, the Omahas, and many other Native American peoples.

The mounds of the American Midwest, often related to Native American tribes and cultures, are believed by some to be the sacred burial mounds of giants. A plethora of newspaper clippings and journal articles documenting the discovery of skeletons anywhere from 7 feet to more than 9 feet tall permeate the 19th-century Midwest.

The Smithsonian has said measurements of such skeletons during this time period must have simply been mistaken. Douglas Ross Hamilton contacted the National Museum of Natural History, administered by the Smithsonian Institution, for comment before publishing his book, “A Tradition of Giants.” He wrote: “An example, contained in a personal communication from a Smithsonian staff member just prior to publication of this book, shows the ongoing denial plaguing the National Museum. The individual’s name is withheld by request, and I paraphrase: As it was in the early days of archaeological excavations, skeletons were sometimes measured as they were found. With the possibility of shifting bones, the re-location of the skull and the feet, an individual could (without doubt) be measured many inches (or even feet) longer than they would have been in life …”

Hamilton argued that not all the skeletons had shifted as such and even “by measuring the long bones of the leg coupled with the measure of the shoulder sockets and the size of the skull, there was little doubt of the stature in life.”

In the Sarasota Herald-Tribune, Jun 28, 1933, an article announced that more than a dozen skeletons, all more than 7 feet tall had been found in Catahoula parish, Louisiana, and the site had been examined by Smithsonian researchers. The report stated that the find “was regarded as contributing to the theory that the prehistoric mound-builder lived there.”

Hamilton cited “A History of Muskingum County,” written in 1884, which gave an account of giant remains found, apparently cremated after death, in Ohio: “Immediately behind, or west of the altar, were found three skeletons, deeply charred, and covered with ashes, lying faces upward, heads toward the south, measuring, respectively: 8 feet 10 [inches], 9 feet 2 [inches], and 9 feet 4 inches in length. In another grave a female skeleton 8 feet long, and a male skeleton 9 feet 4 inches long.”

In 1879, a 9-foot-8-inch skeleton was purportedly uncovered in a mound in Brewersville, Ind. These remains, however, were destroyed when a flood swept through the area in 1937, destroying the building in which the bones were being stored, according to a presentation by Larry Zimmerman of the Department of Anthropology and Museum Studies at Indiana University, titled “Lost Tribes, Sunken Continents, and Ancient Astronauts: On the Wild Side of Midwestern Archaeology.”

In 1871, in the township of Cayuga, Ontario, Canada, it is said that some 200 giant skeletons were uncovered, many of which were as tall as 9 feet and few of which were shorter than 6 feet. The site was open to any who wanted to take a look, and many flocked there. A comment sent by a reader who identified himself as a medical doctor, J.N. Johnstone, to the local newspaper the Hamilton Spectator, was republished by the New York Times on Sept. 10, 1871 reads: “Hearing of the curiosities found in a grave or pit near Cayuga, and being somewhat of a curiosity seeker, I paid it a visit, and deem myself well repaid for any trouble by what I saw. … The size of some of the bones is truly wonderful, indicating a race of giants in the past.”

A 1936 bulletin, written by G.I. Groves of the North American Indian Relic Collectors’ Association and cited by Hamilton, tells of an interesting excavation at the Spiro Mounds of Oklahoma: “Of the skeletal material, only four or five good specimens were found. One remarkable mummy was 8-1/2 feet in length. He had been cremated to such an extent that the flesh was charred,and remained in that condition throughout the ages.”

The bulletin describes the lack of attention paid to this discovery, stating that the remains were moved to a tent where some locals came to take a peek, “but no museum authorities or archaeologists were interested enough to investigate. After occupying for several weeks the only shelter available, it was moved to the rear of the tent to make room for more valuable relics, and left to the ravages of the elements. In a few weeks, it had disappeared.”

So, if all these bones were found, where are they now? Does the evidence only exist in old newspaper clippings?

Continue reading: “Did Giants Exist? Part 2: Where Are the Skeletons Now?”