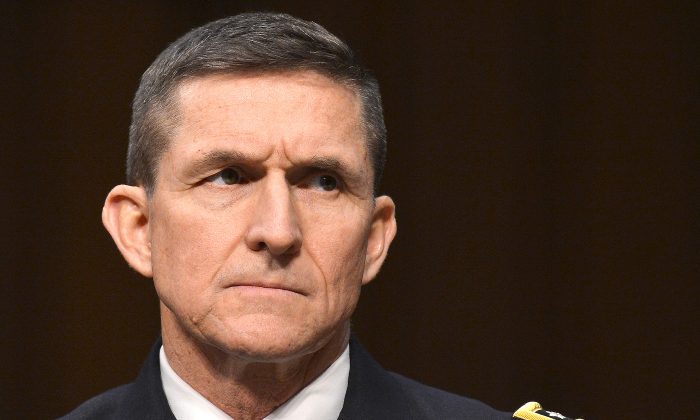 Did Flynn Just Call Out Mueller on Under-the-Table Plea Deal?

Lt. Gen. Michael Flynn appears to have put the team of former special counsel Robert Mueller on the defensive, unraveling what had been suggested to be a possible unofficial deal with the prosecutors.

Flynn, former national security adviser to President Donald Trump, pleaded guilty in 2017 to one count of lying to the FBI. The Mueller team recommended a light sentence for him, including no prison time, officially because of his contrition for the crime and extensive cooperation with multiple Justice Department investigations.

But it appears that another, unofficial, deal may have been in place.

Several weeks before Flynn signed his plea, NBC News reported, based on unnamed sources, that the Mueller team was trying to get Flynn’s cooperation by threatening to indict his son, Michael Flynn Jr.

“If the elder Flynn is willing to cooperate with investigators in order to help his son … it could also change his own fate, potentially limiting any legal consequences,” the article stated.

This isn’t how an official plea deal would work, according to former FBI agent and Epoch Times contributor Marc Ruskin.

“It would be done with a wink and a nod,” he said in a previous phone interview, later adding that “it wouldn’t be binding, but it would be like an understanding.”

It’s not clear whether any such deal was reached and if so, what specifically it entailed. But Flynn’s case involves a number of peculiarities that suggest something was going on behind the scenes.

Flynn’s statement of offense attached to his plea acknowledges that he lied to the FBI during a Jan. 24, 2017, interview.

However, the FBI agent that wrote the report from the interview was Peter Strzok, who was later kicked off the Mueller team after the revelation of his animus toward Trump in texts then-FBI lawyer Lisa Page, with whom he was having an extramarital affair. Strzok was later fired from the bureau, while Page left on her own.

“Michael Flynn … would have faced no legal jeopardy at all if he just wouldn’t have pleaded guilty because they would have never gotten a conviction with Peter Strzok as their star witness,” Rep. Matt Gaetz (R-Fla.), who sits on the House Judiciary Committee, told Fox News on Dec. 4.

Flynn was never charged with lying on the forms and neither was his son, who also worked for the firm.

The Mueller team simply used Flynn’s admission to charge Flynn’s former partner in FIG, Bijan Rafiekian, and Ekim Alptekin, a Turkish businessman and FIG’s client, with false statements on the lobbying forms and for conspiring to act as unregistered lobbyists for Turkey.

The lobbying involved an op-ed published in The Hill under Flynn’s name about Fethullah Gulen, an Islamic cleric living in exile in Pennsylvania who runs a group that Turkish President Recep Tayyip Erdogan blamed for an attempted 2016 coup.

Flynn was supposed to testify on the case and has asked the court to delay his sentencing until after that matter is concluded.

Last month, however, Flynn made an unexpected move. He fired his lawyers—the same lawyers he hired to do the lobbying paperwork for his firm. His new team includes Sidney Powell, a former federal prosecutor who is a critic of corruption in the Justice Department in general and of Mueller in particular.

Later that month, the Mueller team asked Flynn to testify that he signed the lobbying forms knowing about the false statements and intending for them. He refused, saying he only acknowledged the falsities with hindsight, but wasn’t aware of them at the time.

This angered Brandon Van Grack, one of Mueller’s main prosecutors, according to Flynn’s lawyers.

Shortly after that, the Mueller team did several things that Powell called a “retaliation.”

They called off Flynn’s testimony and tried to put a gag order on him to stop him from disclosing that fact.

Then they tried to recast him as a co-conspirator in the lobbying case, despite earlier telling the court multiple times that he wasn’t one.

They also had an FBI agent directly call and question Flynn Jr. “despite knowing that he was represented by counsel,” Flynn’s lawyers said in a court filing. “The Agent persisted in trying to speak with him even after he said to call his attorney.”

Then, on July 11, they designated Flynn Jr. as a witness in the lobbying case, though he wasn’t on the original witness list from the day before (pdf).

If Flynn is indeed being punished for reneging on the “wink and a nod” deal, the Mueller team seems to have the short end of the stick now because, officially, there is no deal.

The judge in the lobbying case made it clear that the government has yet to prove there was a conspiracy to begin with, not to mention that Flynn was a co-conspirator. Meanwhile, Powell told the judge in the Flynn case that the severity of his sentence shouldn’t be affected because he’s still cooperating with the government—he simply clarified that what the Mueller team wanted him to say went beyond what he’d previously acknowledged and wasn’t true.

If there was a deal, the Mueller team has by and large already delivered on its side of it. Whatever leverage it had over Flynn now appears about spent. Does Van Grack still have a card or two to play? And if so, does he really want to tip his hand?

On July 12, the Mueller team handed a statement to Rafiekian’s lawyers saying that the government has “multiple independent pieces of information relating to the Turkish government’s efforts to influence United States policy on Turkey and Fethullah Gulen, including information relating to communications, interactions, and a relationship between Ekim Alptekin and Michael Flynn because of Michael Flynn’s relationship with an ongoing presidential campaign without any reference to [Rafiekian] or FIG.”

Rafiekian’s lawyers seized on the statement, arguing that Flynn was “secretly acting on behalf of Turkey.”

But they also acknowledged that they haven’t seen any such evidence.

“We have no idea what the government is talking about. It smacks of desperation,” she said in a statement, highlighting that during Trump’s presidential campaign “countless people” reached out to Flynn, who was an adviser to Trump.

“Whatever it is, it cannot be new information to the prosecution, and it was only a few months ago prosecutors recommended probation for him,” Powell said. “As we have said in our recent filings, this can only be retaliation for his refusal to answer a question the way they wanted.”

The Mueller team’s claim raises more questions: How did it get this information? How long have they been sitting on it and why? If Alptekin reached out to Flynn on behalf of Turkey explicitly because Flynn advised Trump, why haven’t we heard about it by now? Did Turkey reach out to the Clinton camp too? After all, it was Clinton who was widely expected to replace President Barack Obama, who already had an amicable relationship with Erdogan.

In fact, just days before Rafiekian and Alptekin engaged in talks about the Gulen job in July 2016, Obama called Erdogan “to deliver what a senior administration official described as a ‘shout-out’ for his resilience in the face of a failed coup attempt, and to express relief that the Turkish president and his family were safe,” The New York Times reported.

If the Obama administration, however, somehow learned that Flynn’s firm, unregistered to boot, was working for Alptekin, who is known to have ties to Erdogan, it would have given it a perfect pretext to target Flynn for FISA surveillance as an “agent of a foreign power.”

While it has been speculated that the FBI took out a FISA warrant on Flynn to spy on the Trump campaign, that hasn’t been confirmed.

Update: The article has been updated to reflect that Michael Flynn continues to cooperate with prosecutors.