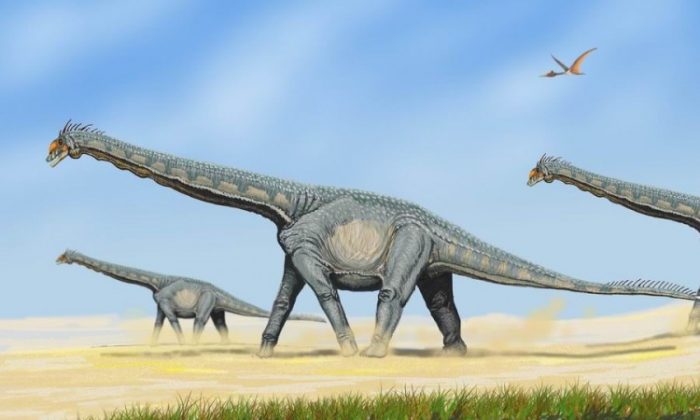 An illustration of Alamosaurus. Study finds that sauropods may have produced more methane than modern sources and contributed to global warming. (DiBgd/Wikimedia Commons)
Science

Massive herbivorous dinosaurs may have contributed to global warming just like cows do today, according to new research by British scientists.

Long-necked dinosaurs called sauropods were prevalent around 150 million years ago. The plants they ate were fermented during digestion with the aid of methane-producing microbial symbionts.

“A simple mathematical model suggests that the microbes living in sauropod dinosaurs may have produced enough methane to have an important effect on the Mesozoic climate,” said study co-author Dave Wilkinson at Liverpool John Moores University in a press release.

“Indeed, our calculations suggest that these dinosaurs could have produced more methane than all modern sources—both natural and man-made—put together.”

Wilkinson’s team worked out approximately how much methane gas would have been generated by a herd of mid-size sauropods, each weighing about 20,000 kilograms (22 tons), at densities of a few large adults to a few tens of beasts per square kilometer (0.39 square miles).

“Clearly, trying to estimate this for animals that are unlike anything living has to be a bit of an educated guess,” Wilkinson said.

They calculated that globally, sauropods would have produced 520 teragrams (Tg) or over 573 million tons of methane per year. This figure is similar to overall methane emissions nowadays.

In comparison, today’s ruminants, which include other grazing animals like horses and goats, only produce 50 to 100 Tg of methane annually. Before the industrial revolution, methane emissions were only about 200 Tg per year.

The high sauropod methane emissions can be explained in several ways. With their long necks, sauropods would have had access to elevated foliage, unlike most modern-day herbivores. Land area back then was larger and photosynthesis by plants was greater due to the warm, wet climate with higher carbon dioxide levels.

The researchers concluded “just how strange and wonderful the workings of the planet are” and noted the significant impact of methane and microbes on the Earth’s climate.

Their findings were published in Current Biology on May 8