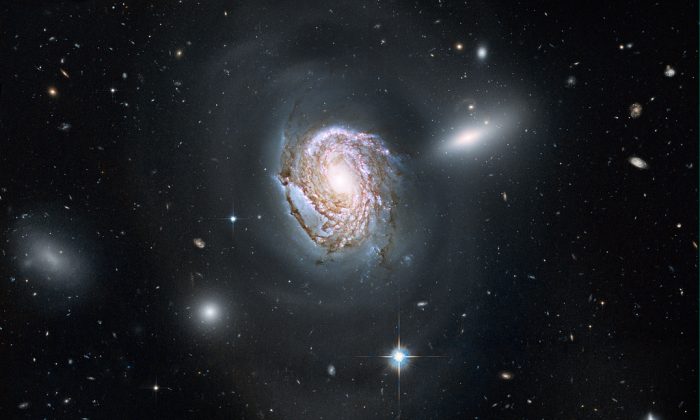 Did ‘Dark Matter’ or a Star Called Nemesis Kill the Dinosaurs

The dinosaur extinction 66m years ago was most likely caused by a comet or big asteroid hitting the Earth. But given that asteroids don’t actually hit our planet very often, could this really be the whole story? Many scientists are now asking whether some sort of cosmological event could have boosted the number of comets at the time, making such a collision more likely.

In a recent book, American cosmologist Lisa Randall suggests that a huge disk of “dark matter” – a type of invisible matter that is five times more common than “normal” matter – could have been responsible. When sweeping past our solar system such a disk would cause a tiny perturbation in space, amounting to a flicker in the gravitational force that can knock comets out of the solar system’s Kuiper belt or the Oort cloud just outside and send them towards the Earth.

But how credible is this theory? And are there other cosmological events that could explain the issue?

Mounting astrophysical and cosmological evidence suggests that there is a lot more dark matter in our galaxy than normal matter. Although it is invisible, we know it is there because of the gravitational pull it has on objects surrounding it.

The fact that it is dark simply means that it does not emit or absorb light, which makes it difficult to spot. Most cosmologists believe this matter, which is after all part of our galaxies and galaxy clusters, moves slowly, and is “cold” (because fast-moving particles are hot).

Randall suggests that there’s a whole disk of dark matter in our own galaxy. For it to have an effect on us it would need to be roughly aligned with the visible disk of the Milky Way so that the solar system oscillates around it as it travels around the galactic centre. But this is problematic because to be able to explain observations made so far, cosmologists believe dark matter would form large spherical halos around galaxies rather than disks.

The Search for ‘Dark Matter’ and ‘Dark Energy’ Just Got Interesting

How Can Dark Matter Cause Chaos on Earth Every 30 Million Years?

Even if it did, there is no reason why this dark disk should be aligned with the visible disk of the Milky Way, which it would have to do for it to unleash a huge comet towards the Earth.

Randall is a world-renowned cosmologist, so her proposal is certainly credible. Provided that the model doesn’t contradict future observations, Randall believes there is a small possibility in which her scenario would actually result in an increase in comets and asteroids.

So is there any evidence of this in the geological or palaeontological record? While the issue is still under debate, there is no conclusive evidence that extinctions have happened periodically. Randall’s team claims the boost in comets may happen every 35m years or so, which some might argue could roughly correlate with mass extinctions.

Revealed for the First Time: Map Sheds Light on Dark Matter That Binds the Universe Together

So, despite a number of unknowns, is a dark disk the best cosmological proposal to explain mass extinctions? One other proposal that has been put forward is that the sun has a companion star, called Nemesis. Nemesis is a hypothetical, faint red/brown dwarf star orbiting the sun at a distance of about 1.5 light years. Every 25m years or so, it makes a pass closer to the sun, which could result in enhanced comet activity, because of its gravitational pull. This is not an unreasonable hypothesis, since the majority of stars belong to systems with multiple stars. However, brown dwarfs are relatively uncommon and Nemesis has not been observed (yet).

To me, Randall’s scenario is more of an interesting “what-if” speculation than a realistic proposal. While her theoretical model is very thorough and more concrete than it may sound at first, the fact that there is no real evidence of periodicity in mass extinctions and crater formation on Earth is a problem. In addition, according to Occam’s razor, which suggests the simplest solution is most likely the best, it is never a good idea to invent more types of dark matter than you actually need.

However, the proposal is certainly not impossible and should be taken into account when making observations. What’s more, it serves to remind us that basic physics and cosmology are fundamental aspects of nature that may even influence the fate of life on Earth.