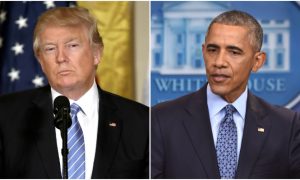 Did Barack Obama, Sr. Meet a Soviet Spy on a Washington Farm?

Nearly 60 years ago, the father of former President Barack Obama traveled to a farm in rural Washington state that happened to be owned by a lifelong communist and deeply committed Soviet spy.

This obscure connection would never have been revealed if not for a self-published autobiography by the spy’s son—Communist Party USA (CPUSA) journalist and dairy-farmer Tim Wheeler—who brags in his book “News From Rain Shadow Country” that he and his wife, Joyce, worked with local Democrats to get Obama elected in 2008 and 2012.

Wheeler went “door to door for him [Obama] in Virginia, Pennsylvania, Ohio, Oregon, and Washington state,” he claims in the book:

“Joyce and I worked hard in Maryland to help Obama carry that state. At the time, we were dividing our time between our home in Baltimore and our home in Sequim. I covered Obama’s campaign writing many articles in the PW [CPUSA newspaper People’s World] about his victories.

“I remember with pride riding the Maryland Black Caucus bus down to Columbia, South Carolina to campaign for Obama in the spring of 2008. I also went door to door for him in Virginia, Pennsylvania, Ohio, Oregon, and Washington State.

“Clallam County, Washington, where we now live, is a swing district. George W. Bush carried Clallam County, narrowly, in 2000 and 2004. Obama carried the county narrowly in both 2008 and 2012. We think our diligent work was a factor in his victory.”

In 2017, CPUSA chairman John Bachtell wrote a review for the CPUSA publication People’s World of Wheeler’s book. Bachtell describes how Wheeler and his then-future wife Joyce once invited Obama Sr. and his unnamed “girlfriend” out to the family farm:

“Tim’s father Don, a brilliant Rhodes Scholar, was employed by the U.S. government in Washington, D.C. Don and Tim’s mother Mary were members of the Communist Party USA, which he later joined. With the dawn of the McCarthy period Don was blacklisted.

“One of Tim’s remarkable connections is with President Obama. It turns out Tim attended the University of Washington with Barack Obama, Sr. They became acquainted through another exchange student from Kenya, Muga Ndenga. Once Tim invited Muga and his fellow Kenyan to visit the family farm.”

According to Wheeler’s account, he ran into his friend Ndenga while “hurrying across the Quad.” Ndenga had visited the family farm previously, and while planning a future visit, asked if he could bring along his “best friend,” Obama, Sr., who also brought his “girlfriend.” The friends all stayed overnight at the farm, after enduring a “white-knuckle” ride in Obama Sr.’s Buick.

Bachtell’s review is not quite accurate. There is no evidence that Obama Sr. attended the University of Washington, but the timeline is certainly interesting. The visit to the farmhouse happened in the “spring of 1961.” Obama, Sr. married Ann Dunham on Feb. 2, 1961, and Obama was born on Aug. 4, 1961. If the “girlfriend” was Dunham, she would have been five or six months pregnant at the time.

By the early 1960s, Wheeler was already a committed communist. Obama, Sr. was also an open socialist. In 1965, Obama, Sr. published a paper titled “Problems Facing Our Socialism” in the East Africa Journal.

“Since many of the African countries achieved their independence there has been much talk about African Socialism,” Obama, Sr. wrote.

“So far, the statements made by such leaders as President Nkrumah, Nyerere, Toure etc., have not had much in common. Likewise, the actions of these leaders while diverting a little from the capitalistic system have not by any means been directed towards any particularly defined ideology, be it scientific socialism—inter alia—communism.”

It is most likely that the Obama, Sr.–Wheeler connection was more political than social.

There is no mention that Obama, Sr. met Wheeler’s father at the farm. Don Wheeler was a working farmer who left the land only in 1965 to work in academia. But it’s likely they did meet. If so, why would neither Bachtell nor Tim Wheeler mention it? Is it possible that Don was actually the real reason for Obama, Sr.’s visit?

Far from being the innocent victim of so-called “McCarthyism” that Bachtell laments, Donald Niven Wheeler was an American traitor of the highest order.

Raised in the Pacific Northwest by a Christian socialist father, Don Wheeler graduated from Reed College in Portland Oregon before traveling to Oxford University on a Rhodes Scholarship. At Oxford, he joined the Communist Party of Great Britain. He later moved to Paris to work for the leftist International Brigades, then fought for the communists in the Spanish Civil War. In Paris, he re-met Mary Vause, a fellow graduate of Reed College and the widow of his best friend, Clare Vause, who had been killed fighting in Spain. They were married in 1938. Both remained lifelong communists, as did all of their children.

In 1938, Don Wheeler returned to the United States, where he joined the Agricultural Adjustment Administration. He was soon afterward recruited as a Soviet agent (code name Izra) and worked under the famous spy-master Jacob Golos.

In 1941, Don Wheeler was appointed as section chief of the Research Division of the Office of Strategic Services (OSS), the forerunner of the CIA. Wheeler worked closely with Duncan Lee, another Rhodes scholar, secret communist, and Soviet spy.

Perlo later wrote in a report to his Soviet supervisors: “He [Don Wheeler] has access to excellent material and once given an explanation of what was wanted, worked hard and bravely to get it. … He has not been reckless but has gotten materials regularly under security conditions more difficult than those faced by most others in the group.”

From 1944 on, virtually the “entire range of OSS analytic and planning documents on Nazi Germany and its postwar prospects flowed continuously from General Donovan’s Washington headquarters through Donald Wheeler to Pavel Fitin’s offices in Moscow,” according to “The Haunted Wood” by Allen Weinstein and Alexander Vassiliev.

Don Wheeler continued to serve his Soviet masters after the war. For example, in November 1945, he sent information on the “Italian domestic political situation on the eve of elections in that country; a copy of the confidential report written by the military governor in the U.S. occupation zone of the USSR; OSS reports about current political events in the USSR; OSS weekly reports on political events in Europe and a State Department intelligence report on the Middle East,” according to an article on the Spartacus Educational website.

On July 30, 1948, former Soviet courier, and girlfriend of spymaster Jacob Golos, Elizabeth Bentley appeared before the House of Un-American Activities Committee. Over the next two days she gave the names of several alleged Soviet spies with whom she worked directly, including Don Wheeler, Perlo, and Lee.

Don Wheeler was called before hearings to testify on several occasions. Unable to work in Washington, Wheeler and his family moved to a dairy farm in Sequim, Washington. He remained active in the CPUSA until his death in 2002.

Meanwhile, the young Barack Obama would grow up fatherless in Hawaii. This void was partially filled in his teenage years by a relationship with mentor and CPUSA member Frank Marshall Davis. Upon moving to the mainland, Obama would work with the Democratic Socialist Alliance at Occidental University and attend the Democratic Socialists of America’s annual Socialist Scholars conferences in New York City.

In Chicago, Obama would work with activists from pro-Soviet circles: Frank and Bea Lumpkin, Dr. Quentin Young, his Illinois state senate boss Alice Palmer, and many others. Bachtell was involved in both of Obama’s presidential campaigns. He would even serve as Obama’s precinct captain during his successful U.S. Senate race in 2006.

Tim Wheeler would go on to edit the CPUSA newspaper People’s World. He campaigned for presidential candidate Obama in South Carolina in 2008.

Is it a coincidence that Obama, Sr. visited that little dairy farm in Sequim, Washington, that just happened to be owned by a bona fide Soviet agent all those years ago?

How many Soviet spies or CPUSA members do you know? The Obama family has known many of them, stretching over five decades at least.