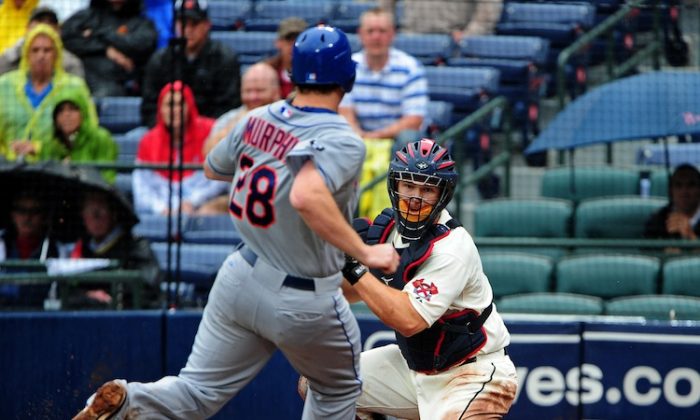 Daniel Murphy (L), who had two hits against the Braves, was tagged out by Atlanta catcher David Ross (R) at home in the fifth inning. (Scott Cunningham/Getty Images)
Baseball

Mets starter R.A. Dickey gave up eight runs on eight hits and a pair of walks in four and a third innings Wednesday afternoon in Atlanta as the Mets (7–5) fell to the Braves (7–5) 14–6 in the rubber match of the three-game set.

For the Mets, the loss ends their six-game road trip against the two of the NL East’s best teams with a respectable 3–3 record.

Jair Jurrjens (0–1) started the game for Atlanta but left after four innings, 89 pitches, while surrendering four runs. Reliever Christhian Martinez came on to relieve Jurrjens, who exited with a 6–4 lead, and pitched out of a none-out, runners-on first-and-third-base jam to pick up the win.

Mets third baseman David Wright drove in three runs on a double and a single. The trio of RBIs brings his career total to 733—tying him with former Mets outfielder Darryl Strawberry for the most in franchise history.

Ike Davis started off the scoring with a solo home run to right field (422 feet) to lead off the second inning. For Davis, who started the season with just two hits in his first 28 at-bats (an .071 batting average), the blast was his third home run in the last four games. Davis also singled in the third inning and has now raised his average to .156.

The Braves answered back with a two-run second of their own, courtesy of a Juan Francisco home run that scored Freddie Freeman. Francisco and Freeman finished with two hits apiece.

In the third, Wright doubled home Kirk Nieuwenhuis and Daniel Murphy to give the Mets the lead back at 3–2. The center fielder Nieuwenhuis, batting in the leadoff spot for the first time this season, had three hits, a walk, and scored three times. He is now hitting .375.

But the Braves struck back again in the fourth with four runs, highlighted by a Martin Prado two-run double and a Dan Uggla home run that scored Prado to put the Mets in a 6–3 hole.

After Wright drove in Nieuwenhuis with an infield-single to pull the Mets to 6–4 in the fifth, Atlanta struck back yet again in the bottom of the inning with a two-run home run courtesy of Freddie Freeman. Freeman’s shot was his first of the season and it sent R.A. Dickey to the showers—the first time he’s failed to finish five innings since June 16 of last year in Atlanta against these same Braves.

The Mets offense kept battling though as Nieuwenhuis continued his big day with an RBI-single in the sixth to cut the lead to 8–5. But by the time they scored next, on a Murphy single in the eighth, the Braves had tacked on four more runs against Mets relievers Bobby Parnell and Tim Byrdak to make it a 12–5 deficit.

The Mets now have Thursday off before beginning a seven-game home stand Friday that starts with San Francisco and ends with former-Met Jose Reyes’s Marlins.