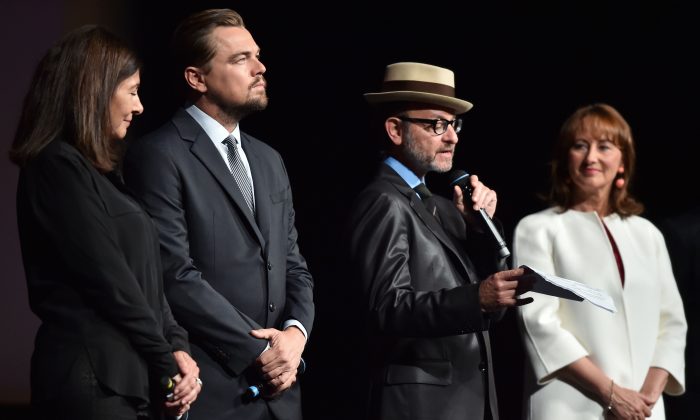 But 'docuganda' appears to be riddled with mistakes

In an apparent attempt to bolster support for former Secretary of State Hillary Clinton, Leonardo DiCaprio is releasing a new climate change movie just days before the election. To be broadcast in 45 languages in 171 countries, “Before the Flood” will debut at 9 p.m. EDT this Sunday on the National Geographic Channel. It will also be available for free on YouTube, Twitter, Facebook, Google Play, iTunes, Amazon, and Hulu.

Judging from the trailers and other pre-release promotions, the public needs to brace itself for an avalanche of global warming propaganda. Like DiCaprio’s short film “Carbon,” released in the weeks prior to the United Nations’ Climate Summit 2014, “Before the Flood” is based on the highly debatable hypothesis that carbon dioxide (CO2) emissions from human activities are causing catastrophic climate change. Coal, oil, and natural gas, the world’s least expensive and most abundant energy sources, must therefore be turned off as soon as possible, DiCaprio says.

The actor seems unaware that the Nongovernmental International Panel on Climate Change (NIPCC) lists thousands of scientific papers that either debunk or cast serious doubt on the climate scare. A quick look at the observational data reveals facts highly inconvenient to DiCaprio’s crusade. For example,

• According to NASA satellites, global warming essentially ceased in the late 1990s. Yet CO2 levels have risen about 10 percent since 1997, a figure that represents an astonishing 30 percent of all human-related emissions since the start of the industrial revolution. This contradicts all CO2-based climate models upon which global warming concerns are founded.
• The United Nations’ Intergovernmental Panel on Climate Change (IPCC) admits that the statistical average of surface temperatures across the Earth increased only one and a half degrees between 1880 to 2012. Such modest warming is not surprising given that the Earth has been recovering from the Little Ice Age since the late 19th century.
• In 2012, the IPCC asserted that a relationship between global warming and wildfires, rainfall, storms, hurricanes, and other extreme weather events has not been demonstrated. The 2013 NIPCC report concluded the same.
• The National Oceanic and Atmospheric Administration shows that the incidence of extreme weather state records has been decreasing in recent years. Not a single record was set in 2016 or 2015. In 2014, there was one. 2013, one. 2012, one. One has to go back to the 1930s to find a time when state-wide extreme weather records were being set at a high pace.

Fulks was right. DiCaprio’s new film is just another vector for spreading the virus.

Moreover, the costs of the climate scare are staggering.

According to the Congressional Research Service, between 2001 and 2014 the U.S. Government spent $131 billion on human-caused climate change projects. They also allowed tax breaks for anti-CO2 energy initiatives totaling $176 billion.

The San Francisco-based Climate Policy Initiative revealed that more than $1 billion is now spent every day across the world on climate finance. Sadly, only 6 percent of it is devoted to helping vulnerable societies adapt to climate change. The rest is spent trying to stop climatic events that might someday happen.

These extraordinary costs are set to increase still further. Bjorn Lomborg, director of the Copenhagen Consensus Center, wrote in the Walls Street Journal on Oct. 13, “At a cost of between $1 trillion and $2 trillion annually, the Paris climate agreement … is likely to be history’s most expensive treaty.”

DiCaprio is correct in one respect. The late Bob Carter, former professor and head of the School of Earth Sciences at James Cook University in Australia, explained, “Climate change is a moral issue, and there is nothing quite so immoral as the sight of well-fed, well-housed Westerners assuaging their consciences by wasting huge amounts of money on futile anti-global warming policies, using money that could instead be spent on improving the living standards in developing countries.”

Carter concluded, “Denying poor nations, many of whose citizens lack adequate sanitation, schooling, clean water, and health services, the finance to build inexpensive hydrocarbon-fired power stations, and who in consequence suffer millions of premature deaths every year, has been aptly described as technological genocide. And that is where the moral outrage should lie.”

DiCaprio should make a film about it.