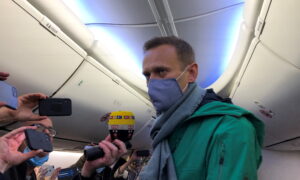 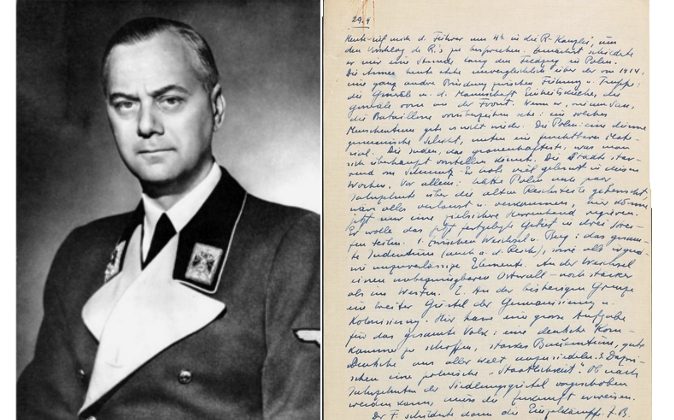 Alfred Rosenberg and his diary. This is the page from 29. 9. 1939, 28 days after World War II. broke out. (Epoch Times; German Federal Archive and USHMM screenshot).
Europe

The diary of Alfred Rosenberg, leading Nazi theorist and adviser to Adolf Hitler, provides a look at key steps in building the Nazi ideology as well as some of Hitler’s personal thoughts. About 400 handwritten pages of the long-lost diary were recently transcribed (in German only) and published online by the U.S. Holocaust Memorial Museum.

The diary changed hands a couple of times after Rosenberg was found guilty of crimes against humanity in 1946 and hanged. It was recovered at the home of publisher Herbert Richardson in Lewiston, N.Y., on June 13, 2013. Many of the entries, dated from 1936 to 1944, became available on Tuesday on the museum’s website.

Epoch Times reviewed dozens of pages detailing daily affairs in the upper echelons of the Nazi regime, to distill some of the insights found in Rosenberg’s diary.

Rosenberg played a key role in forming Nazi theories on racial supremacy and he wrote in the diary about forming a new religion, a religion of “self-assertion.” Hitler even called him “the church father of National Socialism,” as Rosenberg himself recounted.

The entries flesh out and complement his book, started in 1917 and published in 1930, titled “The Myth of the Twentieth Century.” He wrote in this book about a “religion of the blood”; such passages in the book were used as evidence against him and included in an indictment, published by the Cornell Law School.

Rosenberg wrote in his diary of “the great struggle for the absolute supremacy of the state over the church.” He added, “We would continue the fight against the emperor of the great popes and would end it.” (“Das grosse Ringen um die absolute Vormacht des Staates über die Kirche gehe weiter, wir hätten den Kampf der grossen Kaiser gegen die Päpste weiterzuführen und würden ihn beenden.”)

Hitler made Rosenberg the Reich Minister for the Occupied Eastern Territories in 1941. Nazis were divided on the approach toward Russia. Rosenberg felt great pressure, and he noted that Hitler recognized this in an emotional exchange between the two: “The Führer [Hitler] said, and tears came to his eyes: ‘It is a large, positive task you take on.’” (“Der Führer sagte, u. ihm kamen Tränen in die Augen: ,Es ist aber eine grosse positive Aufgabe, die Sie erhalten.‘”)

Though Rosenberg was devoted to Hitler, he did have a different opinion on how Russia should be handled. Rosenberg felt a united Russia should be avoided. He envisioned smaller states acting as a buffer zone, isolating the Great Russian state, which could otherwise gain strength and become a threat.

He compared himself in his diary to philosopher Friedrich Nietzsche, who “saw all coming, but could not change it.” (“…sah alles kommen u. konnte es nicht ändern.”)

Hitler’s Reliance on His Advisers

The diary continues through Nazi milestones large and small. Some of the minor events come together to paint a picture of a Nazi regime confident in its lasting reign.

Rosenberg describes the vision of the Institute for the Study of the Jewish Question in Frankfurt, for example: “Whoever from around the world wants to study the Jewish question will [one day] have to come to Frankfurt [to do so].” (“Wer später aus der Welt einmal d. Judenfrage erforschen will, wird nach Frankfurt müssen.”)

Some daily events described also show Hitler’s trust in his advisers and the extent to which they helped build up “Der Führer.” For example, Rosenberg recalled: “The Führer had not read my speech yet. He told me: ‘I do not need to read your speeches, they are always right.’” (“Der Führer hatte sie noch nicht gelesen. Er sagte mir: ,Ihre Reden brauche ich nicht zu lesen, sie sind immer richtig.‘”)

Juergen Matthaeus, a historian at the museum, told ABC News: “[Rosenberg] was a very early Nazi and some would claim that he was an even earlier Nazi than Hitler himself.”

Matthaeus said the diary, “will shed light on a key player in the Nazi past and when you look at what was going on at the time, you can see how active his staff was to determine policy.”