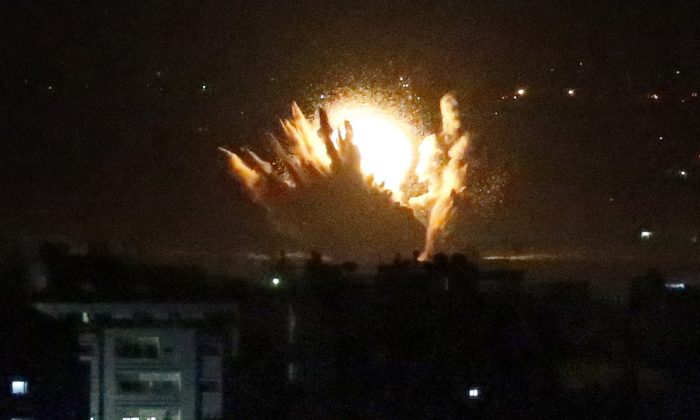 An Israeli missile hits Palestinian buildings in Gaza City on July 17, 2014. Israel launched a ground operation in Gaza late Thursday on the 10th day of an offensive to stamp out rocket attacks from the Palestinian enclave, the army said. At least 240 Palestinians have been killed in Israeli air strikes since July 8, many of them children, medics in Gaza said, with a NGO based in the coastal enclave saying 80 percent of the deaths are civilians. (Thomas Coex/AFP/Getty Images)
Social Media

Diana Magnay, a CNN reporter, was removed by the network after she tweeted that Israelis who were allegedly celebrating missile strikes in Gaza were “scum.”

During the CNN broadcast, she said, “It is an astonishing, macabre and awful thing to watch this display of fire in the air.”

But afterwards, she tweeted: “Israelis on hill above Sderot cheer as bombs land on #gaza; threaten to ‘destroy our car if I say a word wrong’. Scum.

According to the Huffington Post, Magnay was reassigned to Moscow. “After being threatened and harassed before and during a liveshot, Diana reacted angrily on Twitter,” a CNN spokespperson told The Huffington Post.

“She deeply regrets the language used, which was aimed directly at those who had been targeting our crew,” the CNN statement says. “She certainly meant no offense to anyone beyond that group, and she and CNN apologize for any offense that may have been taken.”

On July 17, both sides traded fire in run-up to the brief truce, which Gazans use to restock on food and other supplies. Israel says that foiled an attack by 13 Gaza militants who infiltrated through a tunnel. Fierce fighting then resumed after the truce expires, including an airstrike that kills three Palestinian children. After nightfall, the Israeli military launched a ground invasion into the Gaza Strip.

On Friday, Israeli troops pushed on into Gaza and Netanyahu orders the military to prepare for a “significantly” wider campaign as Israel sees its first military death. The military says it killed nearly 20 militants in exchanges of fire in the coastal territory while Gaza health officials say more than 30 Palestinians have been killed since the ground operation began.