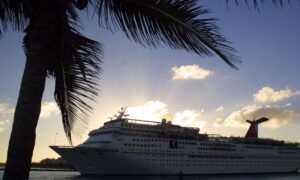 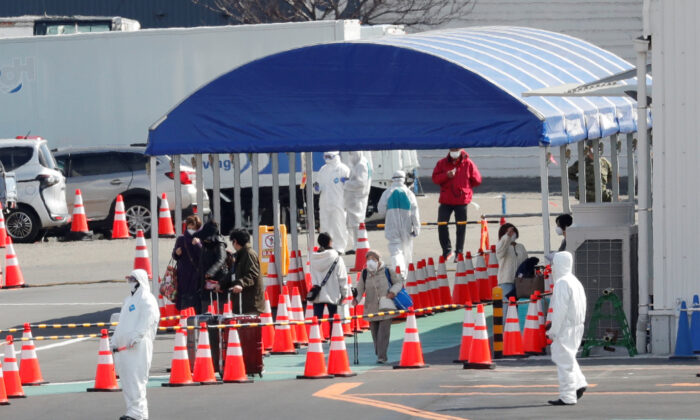 People walk to a taxi queue after leaving the cruise ship Diamond Princess, at the Daikoku Pier Cruise Terminal in Yokohama, south of Tokyo, Japan on Feb. 19, 2020. (Kim Kyung-hoon/Reuters)
WORLD

Japan’s Ministry of Health confirmed an additional 79 passengers and crew on the Diamond Princess have tested positive for the new coronavirus, bringing the total to 621 of about 3,000 people tested.

The ship was been held in quarantine since early February after an elderly man from Hong Kong was confirmed to have tested positive for COVID-19.

“The disembark process for those individuals who are not taking government repatriation flights will start today. The disembark process will be undertaken over several consecutive days, since they will be tested,” said the operator. At the same time, Canada, Australia, and Hong Kong are coordinating the transportation of their citizens via charter flights.

The Diamond Princess has been quarantined at a dock at Yokohama near Tokyo since Feb. 3, initially with 3,700 people aboard. The rapid spread of the disease on board led to criticism of the Japanese authorities just months before Japan is due to host the Olympics.

From Wednesday, passengers who tested negative and showed no symptoms were free to leave. Around 500 were expected to disembark on Wednesday, with the rest of those eligible leaving over the next two days. Confirmed cases were to be sent to the hospital, while those who shared cabins with infected passengers may still be kept on board.

Jan Swartz, the CEO of Princess Cruises, told CNN that “nobody going on vacation thinks that they’re going to be notified in the last days that they’ve got an extension … and they’re not going to be allowed to leave their cabins.”

The U.S. Centers for Disease Control and Prevention (CDC) said Japan’s efforts “may not have been sufficient to prevent transmission among individuals on the ship.”

Clyde and Renee Smith, 80-year-old American cruise passengers hospitalized in Japan since testing positive for the virus on Feb. 3, learned on Wednesday they were still positive. Despite that, they were upbeat about the situation.

“We are very happy here,” Clyde said from the couple’s hospital room in western Tokyo. “They’re taking excellent care of us. This is the newest, fanciest hospital I’ve ever seen.”

From the start, experts raised questions about quarantine on the ship. Passengers were not confined to rooms until Feb. 5. The day before, as passengers were being screened, events continued, including dances, quiz games and an exercise class.

COVID-19 is caused by a new type of coronavirus that is believed to have origins in Wuhan, China. Hundreds of millions of people in China have been placed on lockdown in an attempt to curb the spread of the virus.