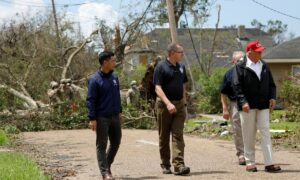 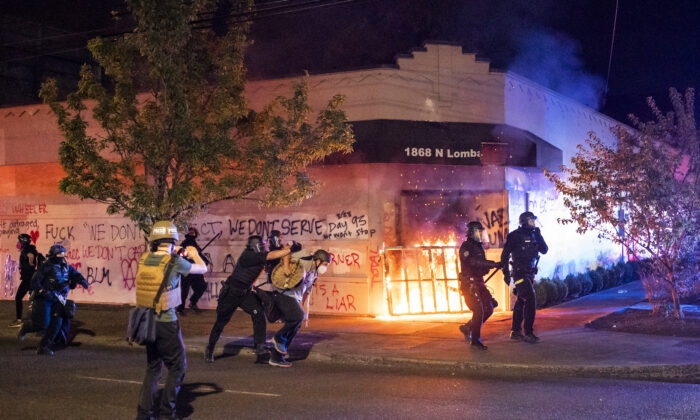 Portland police disperse a crowd after protesters set fire to the Portland Police Association (PPA) building early in the morning in Portland, Ore., on Aug. 29, 2020. (Nathan Howard/Getty Images)
US News

Following a fatal shooting in the midst of violence, civil unrest, and demonstrations in Portland, Acting Department of Homeland Security Secretary Chad Wolf said Sunday that sending federal agents is an option.

“When we talk about Portland, again they continue to refuse any type of federal assistance to bring that violent activity going on for … a little over 90 days to a close,” he said, referring to Mayor Ted Wheeler and Gov. Kate Brown, both Democrats. Earlier this summer, when federal agents were deployed in the city to deal with agitators outside a federal courthouse, Wheeler and Brown alleged that President Donald Trump was acting in an unconstitutional manner.

“The citizens of Portland want this. We need to bring some normalcy back to Portland,” Wolf told ABC News. “And, again, if the state and local officials won’t do it, they need to ask for assistance from the federal government.” He added that “all options continue to be on the table” in regards to Portland, which has been beset by months of violence and unrest in the wake of George Floyd’s death in late May.

“Across the ideological spectrum, left or right, the violence needs to end,” he said. His remark came after what appeared to be supporters of Trump held a demonstration in Portland. Reports indicated that a man wearing a Patriot Prayer insignia, a pro-Trump group, may have been fatally shot in Portland amid unrest.

Meanwhile, Trump said Sunday that Wheeler “is a fool” for not using the National Guard.

“The big backlash going on in Portland cannot be unexpected after 95 days of watching and incompetent Mayor admit that he has no idea what he is doing,” Trump wrote. “The people of Portland won’t put up with no safety any longer.The Mayor is a FOOL. Bring in the National Guard!”

He added, “Wheeler is incompetent, much like Sleepy Joe Biden. This is not what our great Country wants. They want Safety & Security, and do NOT want to Defund our Police!”

The big backlash going on in Portland cannot be unexpected after 95 days of watching and incompetent Mayor admit that he has no idea what he is doing. The people of Portland won’t put up with no safety any longer.The Mayor is a FOOL. Bring in the National Guard! https://t.co/bM6ypak94t

Portland police said the pro-Trump caravan left the area at around 8:30 p.m., and officers heard gunshots at around 8:45 p.m., according to a statement. The man who was shot didn’t survive.

“It is important for detectives get a full and accurate picture of what happened before, during, and after the shooting,” a police statement said. “If anyone was a witness, has video, or has information about the homicide, they’re asked to contact the primary detectives.”

Portland’s Black Lives Matter demonstrations usually target police buildings and federal buildings. Some protesters have called for the abolishment of the police force, budget reductions, and reparations. Wheeler and some black activists have decried the nightly far-left violence in Portland, saying it is creating a wave of antipathy against Black Lives Matter.

Police were eventually forced to declare a riot overnight on Saturday after a fire was set near a police union building.