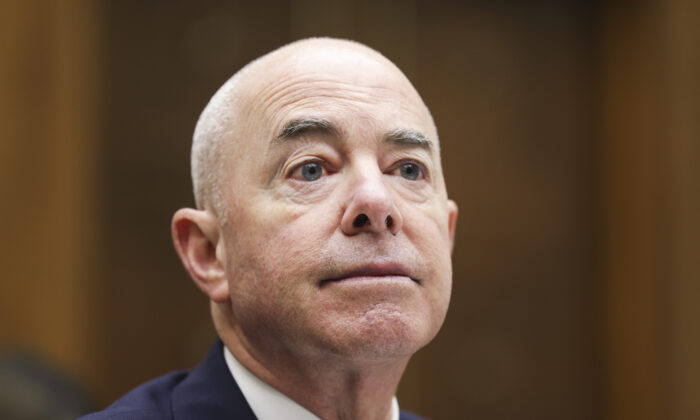 Department of Homeland Security (DHS) Secretary Alejandro Mayorkas has said that at the time the DHS hired Nina Jankowicz to lead the newly created Disinformation Governance Board, he wasn’t aware of the videos of her singing or her false claims about Russiagate and other issues.

Since the DHS’s April 27 announcement of the Disinformation Governance Board and the appointment of Jankowicz, numerous videos and comments made by her have recirculated online—including her citation of Russiagate participant Christopher Steele as an authority on misinformation and her false claims in late 2020 that reports about Hunter Biden’s laptop were part of a Russian disinformation plot.

Jankowicz has also come under fire for her singing, including in one video where she’s seen parodying a Christmas song to make it sexually explicit and in another where she adapts the Mary Poppins “Supercalifragilisticexpialidocious” song into a tune about fake news and disinformation.

Sen. John Kennedy (R-La.) asked Mayorkas about these statements and songs at a May 4 Senate Appropriations Hearing on the DHS’s budget request.

“I am in awe of Ms. Jankowicz. I have watched her videos with slack-jawed astonishment,” Kennedy said. “Who picked her?”

Mayorkas declined to comment on DHS’s internal hiring decisions, but said the decision was ultimately his, as the department’s secretary. This prompted Kennedy to ask him whether he was aware of Jankowicz’s background.

“When DHS picked her, was it aware of her TikTok videos? They’re really ‘quite precocious,'” Kennedy asked, referencing the Mary Poppins adaptation.

Mayorkas said he wasn’t aware of the videos at the time of Jankowicz’s hiring. The same goes for her claims about Steele and the Hunter Biden laptop stories.

“Let me repeat myself and add an additional fact: One, we do not discuss internal hiring processes; two, I was not aware of that fact [her statements about Steele]; three, as the secretary of DHS, I am responsible for the decision of the department; and four, it is my understanding that Ms. Jankowicz is a subject-matter expert in the field in which she will be working,” he said.

“I can tell,” Kennedy responded sarcastically.

Mayorkas also defended the Disinformation Governance Board at the hearing. He pushed back against the Orwellian “Ministry of Truth” comparisons, insisting that the board is actually intended to protect civil liberties.

According to Mayorkas, the DHS has been working to combat disinformation for more than 10 years. Those efforts infringed on constitutional rights at times, which is why the Disinformation Governance Board is necessary, he said.

“Our work in addressing misinformation that threatens homeland security has been going on for almost 10 years,” he said. “So I asked the question, ‘What efforts do we have in place to ensure that the vitally important homeland security work is done in a way that doesn’t infringe on constitutional rights?’ And the answer was: inadequate. So we put together a working group to ensure that guidelines are in place.”

“One threat is that of disinformation. We see it from Russia; we see it from the cartels. And when that threat is evident, that’s when we become involved,” he said.

“And what we recently rolled out—although admittedly not as effectively as we hoped to—was a working group to bring together the experts throughout our department to ensure our ongoing effort is done in a way that doesn’t infringe on free speech, nor on the right to privacy or other civil rights and liberties.”