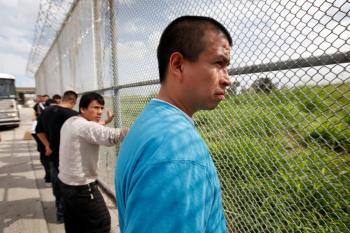 Mario Alberto-Lopez (R) waits to be unshackled by U.S. Immigration and Customs Enforcement (ICE) agents before being led to the Mexican border and released from custody on May 25. (Scott Olson/Getty Images)
US

Joshua Philipp
Joshua Philipp is an award-winning investigative reporter with The Epoch Times and host of EpochTV's "Crossroads" program. He is a recognized expert on unrestricted warfare, asymmetrical hybrid warfare, subversion, and historical perspectives on today’s issues. His 10-plus years of research and investigations on the Chinese Communist Party, subversion, and related topics give him unique insight into the global threat and political landscape.
View profile
Follow
biggersmaller
Print
The Department of Homeland Security (DHS) plans to broaden its Secure Communities program nationwide by 2013, according to a DHS release. Administered by Immigration and Customs Enforcement (ICE), the largest investigative agency within DHS, Secure Communities aims to identify and possibly remove illegal immigrants with criminal histories from the United States.

The program, which began in October 2008, was expanded on Aug. 10, to all 25 counties that line the Southwest border of the United States In the past 18 months, the program has grown from covering 14 U.S. jurisdictions to 544.

Under Secure Communities (S-Comm), when an individual is arrested, his or her fingerprints are recorded with a biometric scanner, and all available information about the arrestee is sent to ICE. The agency then checks immigration records and criminal databases for information on the individual, and if a criminal conviction and illegal immigration are found, the person can be deported.

According to the DHS, the program is meant for “identifying and removing convicted criminal aliens who pose a public safety threat to American communities.”

A key concern about S-Comm is that it will encourage racial profiling, and that individuals who are not convicted of crimes will be deported. “Preliminary data confirms that some jurisdictions, such as Maricopa County, Arizona, have abnormally high rates of noncriminal S-Comm deportations,” says a report from several rights groups, including the National Day Laborer Organization Network.

To date, the program has identified more than 262,900 illegal immigrants convicted of crimes, and more than 34,600 of them were removed from the United States. According to the DHS, more than 9,800 of the individuals removed were convicted of “major violent or drug offenses.”

Although ICE is screening a large number of individuals through S-Comm, only a small percentage of them are being removed, according to Jessica Vaughan, director of policy studies at the Center for Immigration Studies.

Vaughan said that after speaking with ICE agents and local law enforcement officers, she has not seen any evidence of racial profiling through S-Comm.

The DHS has a goal to identify 95 percent of those within the illegal immigrant population who have criminal histories by using biometric scanners. The agency hopes to accomplish this sometime beyond 2011, according to a 2009 DHS report. The 2009 goal was to identify 30 percent of the population, and the 2010 goal is to identify 60 percent.

The information will give ICE “data needed to analyze the size, characteristics, and geographic distribution of the criminal alien population across the country; these results will inform future strategic decisions,” says the report.

According to Vaughan, S-Comm could affect not only individuals who are illegal immigrants, but also those on legal visas or green cards who did not disclose criminal convictions. Since it uses biometric scans, it can also catch individuals who try to give an alias.

Under S-Comm, close to 10 percent of individuals arrested nationwide could be subjected to deportation, according to Vaughan.

Still, the chances of the program being implemented to its full potential remains unlikely. According to a 2009 DHS report on S-Comm, “The size of the alien population subject to immigration enforcement actions exceeds ICE’s current capacity. Due to these resource constraints, ICE is limited to conducting enforcement actions only against a subset of potential subjects.”

S-Comm is part of the DHS border security operations, which has seen a major increase over the past year.

The expansion of S-Comm was announced just three days before President Barack Obama signed the Southwest Border Security Bill into law, which will provide $600 million to combat the Mexican drug cartels and secure the border.

A portion of the funds, earmarked for illegal immigration, will be focused “where we think the best efforts ought to be,” DHS Secretary Janet Napolitano said during an Aug. 13, press conference.

She added, “And that is making sure we are removing from our country criminal aliens, felony fugitives, gang members who are also in our country illegally, particularly once they’ve served their sentences.”

Sisneros said issues of immigration reform and border security are “complicated by the drug war on the border.” He added that “it is a concern that there is a particular focus on Mexican immigrants.”

“No one is against fighting drugs and engaging on the drug war on the border, but it gets mixed up, and it gets thrown into the pot of discussion on immigration reform,” he said.