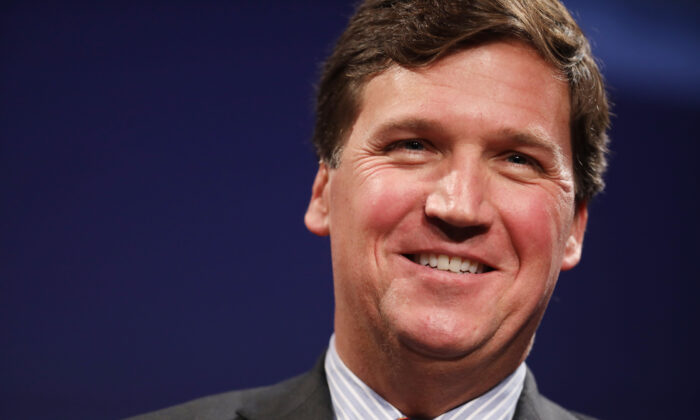 Braddock, who said he has received more than $550,000 in grants from the DHS for a number of his research projects, also applied the stochastic terrorist label to Donald Trump and Rep. Maxine Waters (D-Calif.), adding that Rep. Chuck Schumer (D-N.Y.) could be one, too.

The communications professor was responding to questions from Rep. Dan Bishop (R-N.C.), who asked about Braddock’s May 16 Tweets blaming Carlson for the Buffalo mass shooting two days before. Though Braddock didn’t specify what Carlson said to allegedly provoke the shooter, his Tweets accuse Carlson of stochastic terrorism, defining the term as “a form of incitement, where the speaker uses coded language, dog whistles, and other subtext to justify, promote, or advocate the use of violence without providing overt directives to do so.”

“Whether the shooter was directly motivated by Carlson is salient, but just as important is how he has normalized ideas that advocate violence like what we saw in Buffalo,” Braddock said in one of his Tweets, before concluding his thoughts with calling for a debate about “whether and how stochastic terrorism is allowed to occur.”

Braddock told Bishop he also considers Trump to be a stochastic terrorist in relation to Jan. 6, 2021, blaming the violence that occurred that day to the former president telling protesters to “walk down Pennsylvania Avenue.”

Bishop then asked Braddock whether Waters’ comments from 2018 about harassing Trump administration members qualifies as stochastic terrorism. Braddock said it did.

The professor added that Schumer came close to committing stochastic terrorism in his March 2020 statement that Supreme Court justices Brett Kavanaugh and Neil Gorsuch would “pay the price” if they overturn Roe v. Wade.

“I would say that one walks the line,” Braddock said.

However, Braddock stopped short of calling President Joe Biden a stochastic terrorist for saying a “mini revolution” would occur if SCOTUS overturns Roe v. Wade. Nor did the Washington Post commit stochastic terrorism for allegedly publishing personal details about the owner of the  the Libs of TikTok account on social media, according to Braddock.

Braddock said he wasn’t familiar with the Brooklyn subway incident.

“You’re not aware of the Brooklyn subway attack that just happened a few months ago?” Bishop asked in disbelief.

“No, I’m not familiar with it,” the professor said.

Braddock told Bishop stochastic terrorism occurs when the speaker makes an “implied directive,” such as when Trump told his supporters to walk down Pennsylvania Avenue.

Braddock also failed to mention what “implied directive” Carlson made that led to the Buffalo shooting. He told Bishop he did not study Carlson as part of his work for the DHS, and that he only follows the Fox News host “for my own edification.”

At the hearing, the professor further backtracked from his Twitter statements calling for a debate on whether stochastic terrorism should be allowed to occur. Braddock insisted to Bishop that “it’s not a legal restriction I’m arguing for.”

Braddock added that the DHS did not fund his research into stochastic terrorism. The $550,000 in grants has been for counterterrorism training workshops and other projects, such as “developing inoculation messages” against disinformation, he said.

The professor said he’s “building an experiment” to test how effective his “inoculation message” is. Braddock said he would send Bishop literature about stochastic terrorism and his research after the hearing.