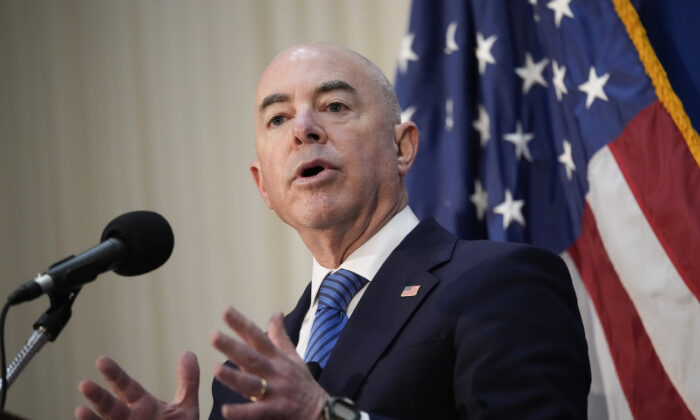 The Department of Homeland Security (DHS) on Wednesday approved a “temporary and targeted” waiver of the Jones Act to ease fuel supply constraints in the wake of concerns over a diesel shortage in Puerto Rico after Hurricane Fiona.

“In response to urgent and immediate needs of the Puerto Rican people in the aftermath of Hurricane Fiona, I have approved a temporary and targeted Jones Act waiver to ensure that the people of Puerto Rico have sufficient diesel to run generators needed for electricity and the functioning critical facilities as they recover from Hurricane Fiona,” DHS secretary Alejandro Mayorkas said in a statement.

“The decision to approve the waiver was made in consultation with the Departments of Transportation, Energy, and Defense to assess the justification for the waiver request and based on input from the Governor of Puerto Rico and others on the ground supporting recovery efforts,” said Mayorkas.

The Jones Act, or the Merchant Marine Act of 1920, is a federal law that requires ships carrying goods between U.S. ports to be owned by American companies, built and registered in the United States, and crewed by Americans. The DHS may only grant a waiver to the 102-year law if “proposed shipments are in the interest of national defense and after careful evaluation of the issue,” the department said.

In a letter to President Joe Biden on Sept. 27 to waive the federal law, Gov. Pedro Pierluisi warned that a shortage of fuel, particularly diesel, would affect essential services and impact public health, security, and government functions in the U.S. territory.

“At the same time, private citizens, businesses, and industries are consuming a significant amount of diesel to generate power, as the public electric grid continues to be repaired.”

Pierluisi’s letter comes after pressure for a Jones Act waiver was building after news circulated that a U.K. tanker with 300,000 barrels of diesel was sitting off Puerto Rico’s southern coast, awaiting entry.

The oil company, BP, said in a statement that it originally submitted a Jones Act waiver request to American officials on Sept. 20 to allow for a ship “to be diverted from its original destination into Puerto Rico to assist with hurricane relief efforts,” The Wall Street Journal reported.

“We are grateful to the Biden administration for taking this action and will deliver the barrels into Puerto Rico as quickly and safely as possible,” a spokesman for the private supplier said on Wednesday.

The category 1 storm with winds of 85 mph caused considerable damage in Puerto Rico as it rolled in on Sept. 18, causing an island-wide power outage for its 3.3 million people and wiping out staple crops like plantains.

On Sept. 29, there were still nearly 300,000 customers without power out of 1.468 million total customers, according to PowerOutage.us.

Puerto Rican officials, including some federal officials, have long called for a permanent repeal of the Jones Act, arguing that they need whatever help they can get, while also noting that the law has driven up prices and crippled the U.S. territory’s economy.

When Hurricane Maria hit Puerto Rico in 2017, the Trump administration approved a temporary 10-day waiver of the Jones Act, which covered all products being shipped to Puerto Rico. An extension of that waiver was deemed unnecessary.