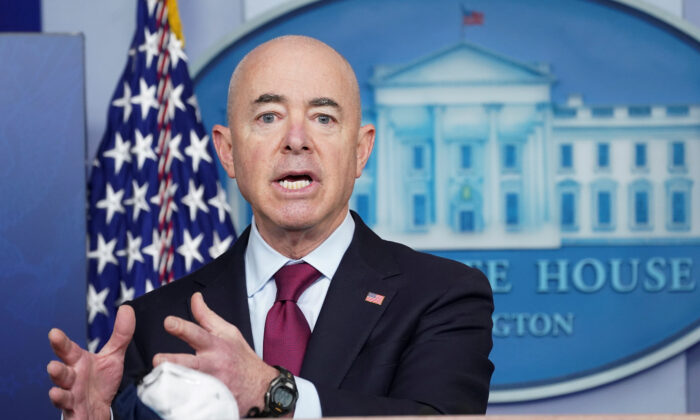 The U.S. Department of Homeland Security (DHS) on Wednesday issued a terrorism advisory, warning that al-Qaeda- and ISIS-linked terrorists are likely to maintain an online presence in an attempt to inspire U.S.-based individuals to engage in violent activity, following the withdrawal of U.S. troops from Afghanistan.

In its latest National Terrorism Advisory System (NTAS) bulletin, published on Nov. 10, the DHS warned that violent extremist media branches of al-Qaeda and its affiliates, as well as ISIS, have “celebrated perceived victories over the United States” following the 20th anniversary of the 9/11 attacks and the U.S. withdrawal from Afghanistan.

The terror groups have also used their online presence to encourage the use of violence by their followers and supporters to “further their objectives.”

“The Homeland continues to face a diverse and challenging threat environment as it approaches several religious holidays and associated mass gatherings that in the past have served as potential targets for acts of violence,” the DHS cautioned. “These actors continue to exploit online forums to influence and spread violent extremist narratives and promote violent activity.”

It warns that foreign groups such as al-Qaeda and ISIS celebrated the U.S. withdrawal from Afghanistan and may use it to encourage violence by their supporters.

“The type of content we’re seeing ranges from videos to online magazines,” the official said. “The videos will very often contain very graphic and violent content, a technique used for years now by the Islamic State- and al Qaeda-related media operations, when seeking to inspire acts of violence.”

“It’s very clear that the theme promoted by media operations [associated with al Qaeda and ISIS] is to conduct attacks in the West,” the official added.

The DHS added in its fourth bulletin this year however that as of Nov. 10, it isn’t aware of an imminent and credible threat to any specific location in the United States.

The advisory also highlights the perceived danger from a volatile mix of domestic extremists, often motivated by racially or ethnically motivated hate, reflecting a shift from the focus on al-Qaida and other organizations following the creation of DHS after the 9/11 attacks.

Timothy Langan, the assistant director of the FBI’s counterterrorism division, made similar points last week in an appearance before the House intelligence committee. He said the threat from domestic terrorism has “significantly increased” in the last 18 months, with the agency currently conducting about 2,700 investigations on violent domestic extremists.

“The greatest terrorism threat facing our homeland is that posed by lone actors in small cells, who typically radicalize online, look to use easily accessible weapons to attack soft targets,” Langan said.

DHS has said it is working with the FBI, state and local law enforcement, and foreign counterparts and has also increased grants and training to community-based prevention programs to address the threat.