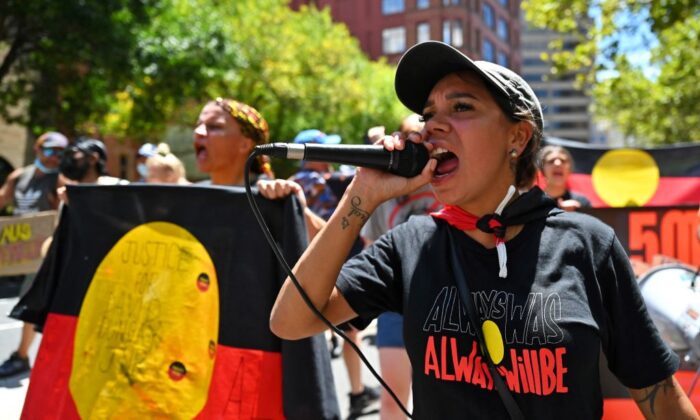 Protesters take part in an "Invasion Day" demonstration on Australia Day in Sydney on January 26, 2022. (Photo by Steven Saphore/AFP via Getty Images)
Australia

The Australian Department of Foreign Affairs and Trade (DFAT) has said that a memo sent to the staff prior to Australia Day encouraging them to act “inclusively” towards Indigenous Australians was not an official document and that it should not have been disseminated.

It comes after the Sydney Morning Herald (SMH) and other media outlets reported on Jan. 26 about an internal email from an acting DFAT staffer working on Pacific issues that told employees to “educate” themselves about the history of Australia during colonial times.

“It should not be left solely to Aboriginal and Torres Strait Islander people to acknowledge the realities of their histories and what this date means,” the email said, reported the SMH.

It has also been revealed that DFAT staff said they felt “embarrassed” by the contents of the email which they believed was an “insult” to their intelligence.

In response to the reports, DFAT published a clarification note on Wednesday saying: “This was not an official or authorised document of the Department of Foreign Affairs and Trade and should not have been distributed.”

On Thursday, thousands of people took part in “Invasion Day” rallies across the country and gathered in Canberra in commemoration of the 50th anniversary of the Aboriginal Tent Embassy.

But despite media coverage amplifying the message of “change the date” advocates, polling on the matter has shown that a growing majority of Australians do not think a change is necessary.

A Roy Morgan poll has shown that 65 percent of Australians believe Jan. 26, the current date, should remain as Australia Day. This is an increase of six percent from 2021.

However, amongst those under the age of 30, the figures were reversed with 64 percent viewing it as Invasion Day.

Marina Zhang contributed to the report.