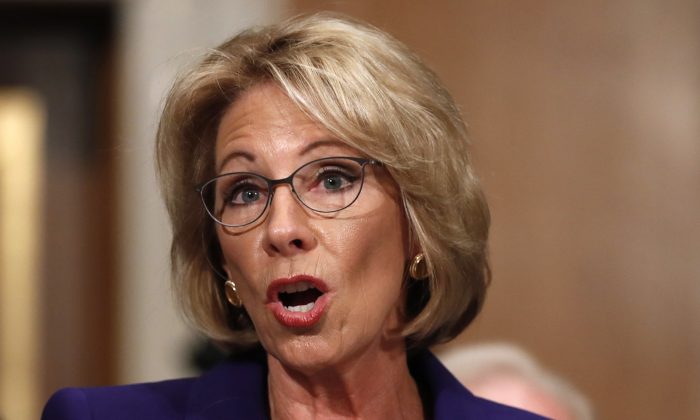 WASHINGTON—Betsy DeVos cleared a major hurdle in the Senate to become the next education secretary despite vigorous opposition from Democrats.

Senators voted 52-48 to cut off debate at dawn Friday, setting the stage for a final confirmation vote next week on President Donald Trump’s nominee.

DeVos, a billionaire Republican donor, has faced fierce criticism from labor unions for her promotion of school choice. Democrats and labor unions have accused her of seeking to dismantle public education and divert funds to charter schools and have criticized her support for taxpayer-funded private school vouchers.

Two key Republican senators have vowed to oppose her nomination, throwing it into jeopardy. If Democrats all vote against DeVos, they need only one more dissenting Republican to kill the nomination.

Sen. Lamar Alexander of Tennessee, the Chairman of the Health, Education, Labor and Pensions Committee, praised DeVos’s work in reforming the school system through charter schools.

“Teachers have more freedom and parents have more choices, they are public schools and Betsy Devos is in the forefront of helping create that opportunity for public education,” Alexander said shortly after the vote. He added that DeVos will seek to diminish federal control over education and give more power to states and locales.

“We will be swapping a national school board for what she believes in, which is a local school board,” said Alexander, who served as education secretary under President George H.W. Bush.

But Sen. Patty Murray of Washington, the senior Democrat on the committee, said she strongly opposes DeVos because of her tangled finances and potential conflicts of interest, her lack of experience in public schools and knowledge of basic education issues. Murray complained that her confirmation hearing was rushed and that DeVos didn’t answer all the questions from Democrats.

“Betsy DeVos is committed to privatizing public schools, and diverting public funds into private taxpayer-funded vouchers that would leave far too many students behind,” Murray said.

In addition to the statements of opposition by the two Republican senators, billionaire philanthropist and public education backer Eli Broad has also come out against her.

DeVos, 59, is the wife of Dick DeVos, heir to the Amway marketing fortune. She has spent more than two decades advocating for charter schools in her home state of Michigan and elsewhere around the country.