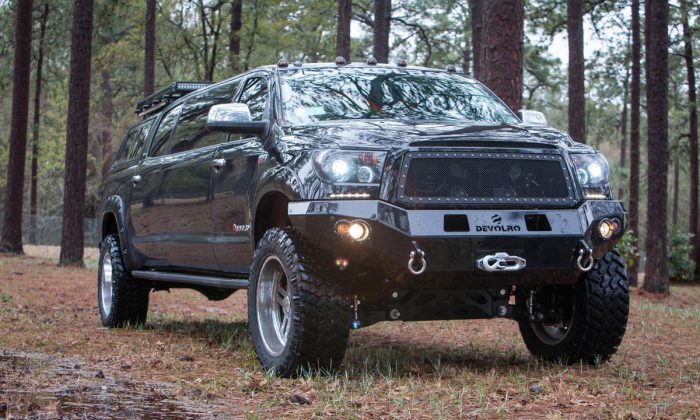 Devolro's fully revamped Toyota Tundra. Devolro vehicles are made to order with over 100 options ranging from supercharging the engine to installing champagne ice buckets in the armrests. A similar configuration sold at the New York Auto Show for $260,000. (Courtesy www.devolro.com)
Autos

NEW YORK—Eduard Orlov became interested in pickup trucks in 2003. He thought they were big beautiful cars. He bought his first pickup truck in 2003 and upgraded it to the maximum extent possible at that time.

He shipped the truck from Miami to Russia for his own use, but as soon as it cleared customs, a buyer offered a formidable sum to buy the car.

“The profit was colossal,” said Orlov.

After the first sale, Orlov decided to develop the idea. At first, he upgraded and tuned Ford pickup trucks for export to Russia. Orlov spent 10 years in Russia before coming to the United States. He is originally from the Republic of Abkhazia, a contested territory between Russia, Georgia, and the Black Sea.

In Miami, Orlov’s main line of business was exporting water vessels, vehicles, construction equipment, and other machinery to Europe. Before that he worked as a truck driver.

“Pickups were just a hobby. I would make myself a car, ride around in it, take photos, and post them on my website,” Orlov said. “Every time I would put up one of my cars there it would sell immediately. I would get calls in just one or two days.”

When business picked up, Orlov switched to upgrading pickups full time. He rented a workshop, hired and trained several technicians, and took over the entire production.

In 2007, Toyota debuted its Tundra pickup. Orlov saw much more potential in the vehicle. In Russia, Toyota Tundra is classified as a Class B vehicle, while Ford pickups are Class C. Class C vehicles can’t be operated in Russian cities without a special license, which was a problem for many buyers.

Orlov understood what Russians wanted. In a culture where the top spenders display their wealth through luxury goods, a car is a statement. When Russian men go hunting, the most expensive all-road vehicle is what everyone wants. But the chase for the top of the line cars usually turns comedic, as 30 well-to-do men pull up in the wilderness in identical trucks.

Orlov’s clients told him: “We can’t even show off to anyone. But when we saw your car we were stunned.”

“When they saw the car live they were just out of their minds. They couldn’t believe the power,” said Orlov.

Cars in Orlov’s shop are outfitted with ARB suspension systems, similar to those installed in Hummers. But Devolro trucks are two tons lighter than a Hummer, which adds tremendously to their off-road power. There is an option to supercharge the engine from 380 horsepower to 520, but Devolro doesn’t stop there. The vehicles are completely revamped: from engine, chassis, and suspension to the seats and cup holders, all based on client preference.

“The base price of a Tundra Platinum Edition is about $60,000. All of our upgrades are on top of that and we offer over 100 upgrades,” Orlov said. “The most expensive exclusive order we did was for a company that paid us $50,000 on top of the total to ensure that we never make another model like it. That car cost $375,000.”

Nothing could be more of a surprise than the response Devolro vehicles received at the International Auto Show in New York.

Devolro representatives received a total of 150 orders in 10 days. Among them are two exclusive contracts: one for 20 cars a month to the United Arab Emirates and another for the same quantity to Colombia.

Orlov answered interview questions while viewing a 20,000 square foot warehouse in Miami. His three workshops are beyond capacity and he plans to move his entire production to the new space. Once the workshop is set up it will be able to accommodate the production of more than 20 cars per month.

“This was a huge boost for us. We never expected this to happen. We were shocked when we returned to Miami,” said Orlov.

One in five orders at the auto show came from American customers, a first for Devolro, which usually works with overseas buyers.

A $260,000 configuration was sold on the spot at the show, for a buyer in Monaco. Devolro will deliver that vehicle there via airplane along with the rest of its showcase fleet for the Top Marques Monaco exhibition, one of the world’s premier luxury shows.

“This is a show for all of the most expensive and exclusive goods. Rich people come there from all over the world to buy their cars, yachts, planes, helicopters, and jewelry,” said Orlov. “Yesterday I received a huge photo in the mail—Monaco Top Marques is using a picture of our car alongside their logo to promote the event.”