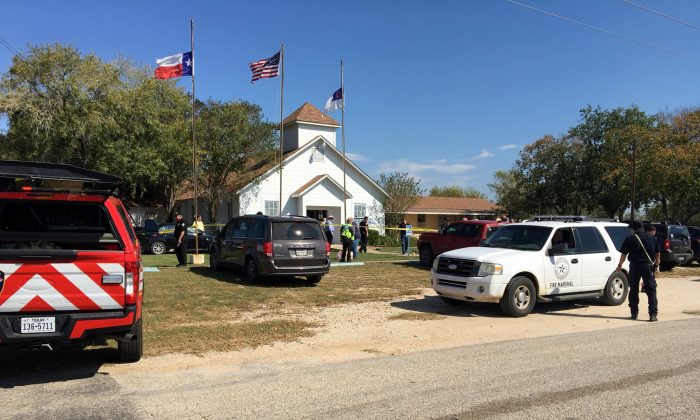 The area around a site of a mass shooting in Sutherland Springs, Texas, on Nov. 5, 2017, in this picture obtained via social media. (Max Massey/ KSAT 12/via Reuters)
US News

Several media outlets on Sunday evening are reporting that the suspect in the Texas church shooting was identified as Devin Patrick Kelley.

Kelley, 26, is a resident of New Braunfels, located near San Antonio, public records show, as reported by The Daily Beast.

CBS News and NBC News confirmed Kelley was the gunman.

He was reportedly found dead after the mass shooting, which left at least 20 people dead.

Details about Kelley, including a motive, have not been released.

According to MySanAntonio.com, his home was raided on Sunday afternoon by San Antonio Police.

President Donald Trump said he was monitoring the situation while in Japan on a 12-day Asian trip.

“May God be w/ the people of Sutherland Springs, Texas. The FBI & law enforcement are on the scene,” he said on Twitter.

May God be w/ the people of Sutherland Springs, Texas. The FBI & law enforcement are on the scene. I am monitoring the situation from Japan.

According to the witnesses, about 20 shots rang out about 11:30 a.m. (1730 GMT) during the church services, according to media reports. It was unclear how many worshippers were inside at the time.

After the shooting, the suspect sped away in a car and was soon cornered by sheriff’s deputies just outside of Wilson County in Guadalupe County, Wiley told Reuters. He did not know if the shooter died of a self-inflicted gunshot or was killed by deputies.

This is a breaking news story. More details will be added when they arrive.