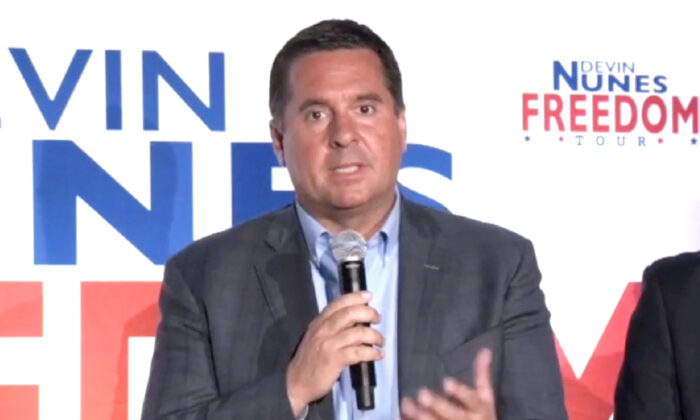 The FBI’s raid on Donald Trump’s residence at Mar-a-Lago represents another example of the Democratic party’s objective to politically “target” and “destroy” the former president, according to former U.S. Rep. and current Trump Media and Technology Group CEO Devin Nunes.

On Aug. 8, Trump released a statement saying that “a large group of FBI agents” raided his home at Mar-a-Lago in Palm Beach, Florida.

He called it a “weaponization of the justice system” and an “attack by the radical left Democrats who desperately don’t want me to run for president in 2024.”

In a press release, Trump added, “They even broke into my safe!”

The events of Aug. 8 were about “people that are after power, trying to destroy their political enemies, which is what happens in Third World countries where one party works to destroy the other party,” Nunes told The Epoch Times.

“It’s been nonstop for five years against [former] president Trump because, look, he was a disrupter,” Nunes said.

“He was not somebody from politics. He had never worked in Washington. And he came in and said, ‘Look, we’re going to do things differently. And he shocked the ruling class in this country. And they’ve never forgiven him.”

Trump is under scrutiny for a variety of issues that range from the U.S. Capitol breach on Jan. 6, 2021, to his family’s business dealings.

The FBI converged on Mar-a-Lago reportedly in pursuit of evidence on whether Trump mishandled classified information when he took White House documents with him upon leaving Washington on Jan. 20, 2021.

Trump, who was investigated by the FBI over now discredited allegations of colluding with Russians in the 2016 presidential campaign, has yet to announce if he will run for president in 2024, but many political pundits believe that will happen.

He served as Republican chair of the House Intelligence Committee from 2015 to 2019.

From the executive branch to the Department of Justice and all of the intelligence agencies, “Democrats and their propaganda machine in the media have normalized this type of bad behavior,” Nunes said.

“Well, look, we know for sure back in 2016, he was definitely targeted by the Obama-Biden administration, working with the Clinton campaign and working with dirty cops at Department of Justice and the FBI,” Nunes said.

“It’s actually moved up into the judicial branch of government,” Nunes said. “Supreme Court justices were targeted. We had leaks of information from the Supreme Court first time in history.

“Now you have a raid on [former] president Trump’s house, the first time that’s ever happened to any president in history for what appears to be complete nonsense. I mean, it’s crazy.”

In a Truth Social post on Aug. 10, Trump wrote, “In early June, the DOJ and FBI asked my legal representatives to put an extra lock on the door leading to the place where boxes were stored in Mar-a-Lago—we agreed,” Trump explained. “They were shown the secured area, and the boxes themselves.

“Then on Monday, without notification or warning, an army of agents broke into Mar-a-Lago, went to the same storage area, and ripped open the lock that they had asked to be installed. A surprise attack, politics, and all the while our country is going to hell!” Trump added.

Trump’s allegations add more questions about whether the raid was justified and appropriate.

The Department of Justice and the FBI have declined to comment on the issue. The search warrant is currently sealed.

Christina Bobb, who is Trump’s lawyer, confirmed that federal agents were searching for presidential records at Mar-a-Lago during the raid, and she told The Epoch Times, “Nothing had been hidden and nothing had been kept secret from them, which makes this all the more ridiculous.”

“Donald Trump didn’t commit a crime,” she said. “They would have to lay the foundation that Donald Trump actually packed up his own office, and Donald Trump was actually the custodian of these records, and that he actually moved them.”

Nunes was outspoken against the FBI’s investigation of Trump’s campaign when he was Republican chair of the House Intelligence Committee. He sees parallels between that probe and the raid on Mar-a-Lago.

“A lot of the same people who were ‘Russia hoaxers’. These people have now been promoted into the Biden administration. So the whole idea that Biden doesn’t know anything, is preposterous. It’s just not true,” Nunes added.

“They know it. They’re definitely targeting [former] president Trump because they don’t want him to run for president. Again. It’s that simple.”

After the conduct of the DOJ and the FBI during the Russia investigation, Nunes believes it is fair to question the credibility and trustworthiness of those agencies.

The agencies used “made up dirt” and “fed it into the media,” Nunes told The Epoch Times about his viewpoint of the Russia investigation.

“The media would write a story and they’d have operatives feed it into their buddies at the FBI. And so then, all of a sudden, they [the FBI] would go into court and say, ‘Oh, my gosh, look at all this. Russians everywhere with Trump. Look, we’ve got stories about it. We have all these sources,’” Nunes explained.

“The problem is, it was all a lie. None of it was true,” Nunes said. “All of it was fake and look, and still, only one FBI agent has paid the price for falsifying the document. The other people have skated.

“You’ve got this you’ve got kind of two-tiered justice system that if you’re a Democrat, you walk,” Nunes added.