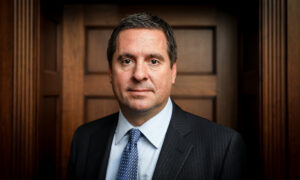 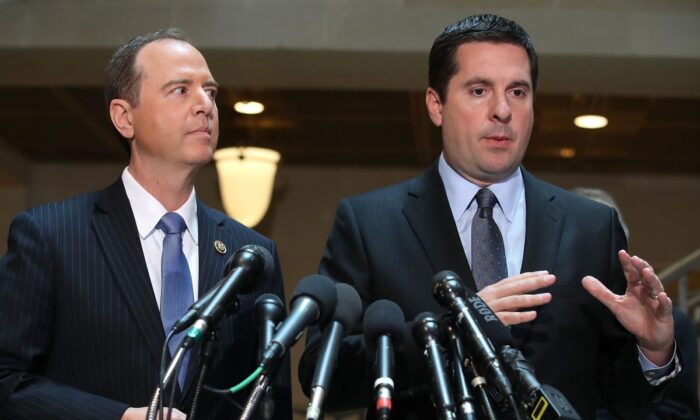 Democrats failed to “engaged in a last-ditch effort” to paint Trump as a “Russian agent,” and now the current impeachment inquiry is a continuation of the “Russian hoax,” Nunes said.

“What we will witness today is a televised, theatrical performance staged by the Democrats … It seems you agreed wittingly or unwittingly to participate in a drama,” Nunes said.

He also blasted the “cult-like atmosphere in the basement of the Capitol” when Democrats questioned witnesses before releasing a flood of misleading, one-sided leaks while selecting officials for impeachment depositions who would fit their narrative.

“They refused our request to hear from [Hunter] Biden himself,” Nunes said, adding that Democrats “broke their promise” to have the whistleblower testify.

Congress has also lost the confidence of millions of Americans and has done “great damage” to the United States, he continued.

House Intelligence Chairman Adam Schiff (D-Calif.) is the one leading the impeachment hearing, and he issued a lengthy statement, detailing the Democrats’ allegations against Trump.

“If we find the president of the United States [had] invited foreign interference in our elections” or has engaged in quid pro quo actions with Ukraine “is this what Americans should now expect from their president?” he asked during the hearing.

“Beginning in January of this year, the President’s personal attorney, Rudy Giuliani, pressed Ukrainian authorities to investigate Burisma, the country’s largest natural gas producer, and the Bidens, since Vice President Joe Biden was seen as a strong potential challenger to Trump,” Schiff said.

“The questions presented by this impeachment inquiry are whether President Trump sought to exploit that ally’s vulnerability and invite Ukraine’s interference in our elections,” Schiff said. “Whether President Trump sought to condition official acts, such as a White House meeting or U.S. military assistance, on Ukraine’s willingness to assist with two political investigations that would help his reelection campaign. And if President Trump did either, whether such an abuse of his power is compatible with the office of the presidency.”