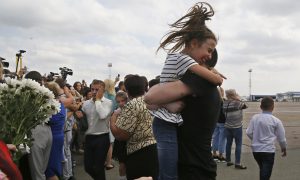 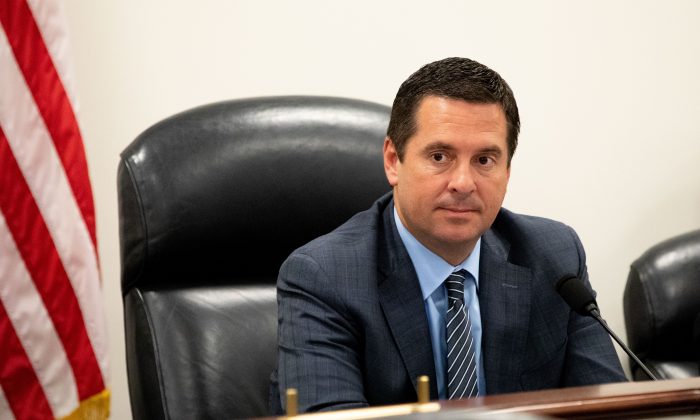 Rep. Devin Nunes (R-Calif.) said the Ukraine controversy is the latest attempt by the Democrats to create an impeachable offense and remove president Trump before the 2020 elections.

Nunes criticized Democrats for politicizing the handling of the Ukraine whistleblower complaint to increase their candidate’s chances of winning the 2020 election.

“I want to congratulate the Democrats on the rollout of their latest information warfare operation against the president, and their extraordinary ability once again to enlist the mainstream media in their campaign,” Nunes, the Intelligence Committee ranking member, said in a pointed opening statement during Thursday’s hearing with the director of national intelligence.

The hearing was held to allow lawmakers to learn more about the whistleblower’s complaint.

“This operation began with media reports—from the prime instigators of the Russian collusion hoax—that a whistleblower is claiming President Trump made a nefarious ‘promise’ to a foreign leader,” Nunes continued. “The released transcript of that call has already debunked that central assertion, but that didn’t matter. The Democrats simply moved the goalposts and began claiming that there doesn’t need to be a quid pro quo for this conversation to serve as the basis for impeaching the president.”

Trump’s Ukraine call transcript, released by the White House confirmed that a request to investigate Joe Biden and his son was made on the call but that the president did not try to extort the Ukranian President by withholding aid.

“So, there you go. If their whistleblower operation doesn’t work out, the Democrats and their media assets can always drum up something else,” Nunes said.

He said that the complaint was hearsay and that the whistleblower showed “arguable political bias.” Nunes also noted that the Dept. of Justice investigated the complaint and determined that it was not a cause to impeach.

“So, once again, this supposed scandal ends up being nothing like what we were told. And once again, the Democrats, their media mouthpieces, and a cabal of leakers are ginning up a fake story, with no regard to the monumental damage they’re causing to our public institutions and to trust in government, and without acknowledging all the false stories, they propagated in the past.”

The congressman highlighted “countless” allegations the Democrats made against Trump and his campaign, but that never bore fruit.

“We’re supposed to forget about all those stories but believe this one. In short, what we have with this storyline is another Steele dossier. I’ll note that in the Democrats mania to overturn the 2016 elections everything they touch gets hopelessly politicized. With the Russia hoax, it was our intelligence agencies which were turned into a political weapon to attack the president, and now today the whistleblower process is the causality.”

The California congressman listed examples of the Democrat doing precisely what they claim the president is doing with the Russians.

“Joe Biden bragged that he extorted the Ukrainians into firing a prosecutor, who happened to be investigating Biden’s own son. Three Democratic senators wrote a letter pressuring the Ukrainian general prosecutor to reopen the investigation into former Trump campaign officials. Another Democrat senator went to Ukraine and pressured the Ukrainian president not to investigate corruption allegation involving Joe Bidens son,” Nunes continued

Nunes quoted a Democrat saying, “I am concerned that if we don’t impeach the president, he will get reelected.” He continued, “Winning elections is hard, and when you compete, you have no guarantee you’ll win …”

He called the Democrat’s latest attempt to discredit Trump as “unhinged and dangerous.”

Nunes ended his opening statement by saying Democrats “should end this entire dishonest, grotesque spectacle and get back to solving problems…Judging by today’s charade, however, the chances of that happening anytime soon are zero to none.”