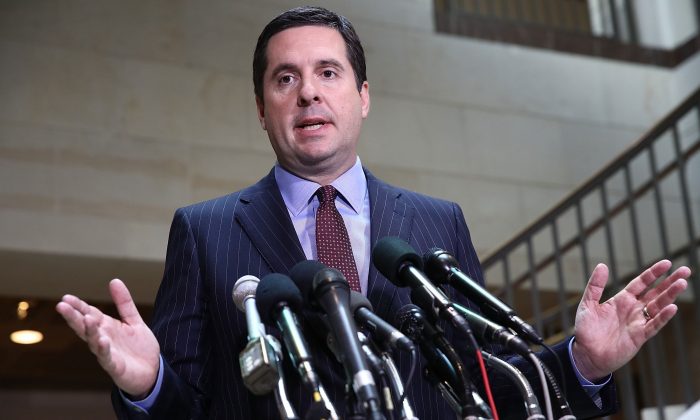 Rep. Devin Nunes (R-Calif.) and other house lawmakers this week issued a preservation order for all evidence and records connected to changes made to the whistleblower form.

In a letter addressed to Inspector of the Intelligence Community General Michael K. Atkinson on Sept. 30, Republican Reps. Nunes, Kevin McCarthy (R-Calif.), and Jim Jordan (R-Ohio) asked for the preservation of all evidence linked to secret revisions made to rules submitted to the office.

“[The] timing of the removal of the firsthand information requirement raises questions about potential connections to this whistleblower complaint,” the letter reads.

The letter states that the complainant did not submit details which rely on first-hand information. The whistleblower’s complaint, released by the House Intelligence Committee on Sept. 26, is instead filled with information the complainant received from purported government sources, media reports, and other publicly available information, the letter says.

“Every allegation contained in this complaint … is based on press reporting, speculation, or the complainant’s secondhand knowledge of the alleged misconduct,” they wrote.

The whistleblower complaint, which centers around a July 25 call between President Donald Trump and Ukraine’s president Volodymyr Zelensky, sparked a formal inquiry into impeaching Trump.

House Speaker Nancy Pelosi (D-Calif.) made the announcement on Sept. 24, alleging that Trump “seriously violated the Constitution” after claims published in The Wall Street Journal alleged that he pressed Zelensky to investigate former Vice President Joe Biden and his son, Hunter.

“Based on the language on [the May 24, 2018] form, it appears that the requirement for firsthand information has been an ICIG policy regardless of how a whistleblower makes an urgent concern report,” they continued.

“Curiously the urgent disclosure form that now appears on the Office of the Director of National Intelligence website has recently changed and no longer contains this explicit firsthand information requirement.”

It came after it was revealed that sometime between May 17, 2018, and Sept. 24, 2019, the office removed language from the Urgent Concern Disclosure Form that notified complainants that their reports wouldn’t be transmitted pursuant to the Intelligence Community Whistleblower Protection Act (ICWPA) unless they had firsthand knowledge of alleged wrongdoing.

The removal of the language is significant because on Aug. 12, less than three weeks before the form was modified, the Intelligence Community inspector general (ICIG) received the whistleblower complaint based entirely on secondhand knowledge about the call between Trump and Zelensky and related events. Democrats relied on the complaint, before it was made public, to launch the impeachment inquiry.

A version of the Urgent Concern Disclosure Form, which was created on May 17, 2018, states that “in order to find an urgent concern ‘credible,’ the ICIG must be in possession of reliable, firsthand information.”

“The ICIG cannot transmit information via the ICWPA based on an employee’s secondhand knowledge of wrongdoing,” the form, which The Epoch Times obtained from a CIA whistleblower, states.

The form currently posted on the ICIG website no longer features the language requiring firsthand knowledge.

“There has never been any requirement that whistleblowers were required to possess firsthand knowledge to file complaint. No law anywhere states that,” Mark Zaid, the attorney for the anonymous whistleblower, wrote on Twitter.

The Office of the Director of National Intelligence (ODNI) and the ICIG didn’t respond when asked when the new form became official, who approved it, why the change was made, and if the process for handling complaints featuring secondhand information has changed.

The letter from Nunes, McCarthy, and Jordan tells ICIG Atkinson he must answer their questions related to the revisions by 12 p.m. on Oct. 3.